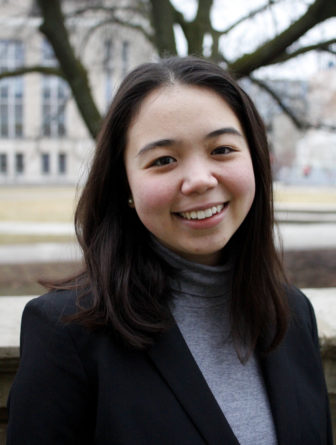 Mia Sato is a public engagement and marketing assistant at the Wisconsin Center for Investigative Journalism. To pass along information about a news desert, contact her at msato@wisconsinwatchmediapartners.wpcomstaging.com

News outlets in a community shut down, leaving Haverhill, Massachusetts without immediate, local news. A San Francisco editor refused to lay off more staff, was forced out, and became the reporter, editor, bookkeeper and fundraiser for his own nonprofit newsroom. Residents of South and West Chicago communities didn’t see issues they care about reflected in mainstream news, and became disenchanted with journalism and politics.

Have you seen any “news deserts” in Wisconsin? Do you live in one?

The concept of “news deserts” is drawn from the term “food deserts,” which are areas lacking access to fresh produce and other healthy food.

News deserts are geographical areas or socioeconomic groups that are parched of fresh, important local news, whether it’s a result of the shuttering of neighborhood newspapers, downsizing and the limited resources of news outlets or a lack of coverage of particular topics.

News deserts can also appear where news coverage isn’t relevant to the people it serves, where there’s a lack of representation in who is featured in the news, or where news delivery systems falter because of a lack of broadband service or other weaknesses.

As resources within newsrooms become increasingly strained, it’s easy to see why news deserts are proliferating throughout the nation.

One of my professors, Sue Robinson, caught my attention in class when she used the term – at that point, I’d never heard it before. Although that University of Wisconsin-Madison course on journalism in minority communities ended nearly a year ago, news deserts have become the major focus of my job at the nonprofit Wisconsin Center for Investigative Journalism.

Here’s why — and how you can help us understand this important problem.

As a person of color, I’m particularly concerned about news deserts. I was raised in a mixed race, multicultural home, and grew up seeing both sides of my family consuming the news.

I remember my grandmother on my mom’s side – who is white – spreading the Appleton Post-Crescent out on the floor of her living room, reading the paper in the mornings, and my Japanese father always with a copy of that week’s Shukan Shincho, a Japanese weekly news magazine, in hand.

But many marginalized people do not have that same experience.

What if my family didn’t know the language well enough to read the newspaper?

What if we couldn’t afford it?

What if I never saw people like me represented in the news, so I didn’t bother staying informed or subscribing to a paper?

These are realities for many minorities, and it wasn’t until I reported in communities of color for my Journalism for Racial Justice course that I saw firsthand that a lack of representation and access create disengagement from news for many marginalized Wisconsinites.

The public is profoundly impacted by the challenges journalism faces. Lack of access to important news is essential to a vibrant democracy, and citizens rely on news coverage to stay informed about important issues, from decisions being made in politics to what’s in their children’s drinking water.

I believe the greatest task a journalist has is to empower the people we serve, especially marginalized populations – rural Americans without internet, minority communities who don’t see themselves in regular news coverage or poor populations who cannot afford to pay for information, for example.

When I was asked at my WCIJ internship interview to pitch a project I would like to work on if hired, I knew exactly what to say. Several national projects are already underway, but I was interested in learning what the news ecosystem looks like right here in Wisconsin.

And now, with the help of the Wisconsin Newspaper Association, UW-Madison School of Journalism and Mass Communication professor Lewis Friedland and community members, I’m thrilled that the project is taking shape.

I am working to identify geographic and demographic news deserts in Wisconsin, with the hope that we can understand how people are getting their news and where there are coverage gaps. We want to begin to strategize how information access can be improved. By the time the first stage of this project ends in September, we will have identified two Wisconsin news deserts and begun work on a plan to work with news organizations and others to improve the public’s access to information.

In our initial work, we’re hearing a lot about potential news deserts in rural areas of northwestern Wisconsin and in Milwaukee’s black communities.

But we want to hear from you. How hard or easy is it for you to get news that’s important to you? Do you experience coverage gaps? Are you a journalist whose reporting capability has been hurt by dwindling resources?

Help WCIJ identify news deserts in Wisconsin by writing to me at msato@wisconsinwatchmediapartners.wpcomstaging.com.

The impact on lives and our democracy can be priceless.

Mia Sato, msato@wisconsinwatchmediapartners.wpcomstaging.com, is a public engagement and marketing intern at the nonprofit Wisconsin Center for Investigative Journalism. The Center (www.WisconsinWatch.org) collaborates with Wisconsin Public Radio, Wisconsin Public Television, other news media and the University of Wisconsin-Madison School of Journalism and Mass Communication. All works created, published, posted or disseminated by the Center do not necessarily reflect the views or opinions of UW-Madison or any of its affiliates.

Mia Sato began working at the Center in September 2016 as a senior at the University of Wisconsin-Madison studying journalism, political science and Japanese. Prior to joining the Center, Sato worked at Wisconsin’s Equity & Inclusion Laboratory as Communications Specialist. She also serves as Editor-in-Chief of Emmie, UW-Madison’s student-run music magazine. Her writing has appeared in The Post Crescent, Fox Cities Magazine and Madison365.