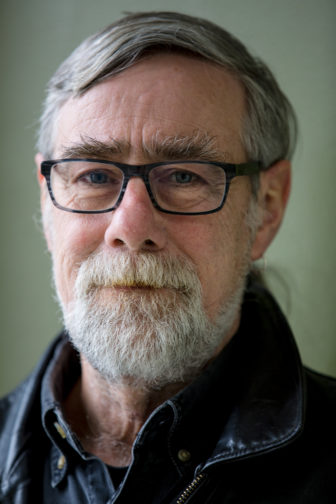 Gilman Halsted is the 2017 recipient of the Distinguished Wisconsin Watchdog Award.

Gilman Halsted, a retired Wisconsin Public Radio reporter who produced award-winning examinations of the state’s criminal justice system, has been named the 2017 recipient of the Distinguished Wisconsin Watchdog Award.

Over the course of two decades, Halsted became a familiar voice to WPR listeners, working for six years in the Wausau bureau before moving to Madison in 2000. He covered the courts and the prison system and also wrote and produced general assignment stories for daily state newscasts until his retirement in 2016.

The award is a highlight of the seventh annual Wisconsin Watchdog Awards reception and dinner, a celebration of open government and investigative reporting. The award is presented jointly by the Wisconsin Center for Investigative Journalism, the Wisconsin Freedom of Information Council, the Madison Pro Chapter of the Society of Professional Journalists and three additional organizations that are joining the selection committee for the first time — the Wisconsin Newspaper Association, Wisconsin Broadcasters Association and University of Wisconsin-Madison School of Journalism and Mass Communication.

“For more than 15 years, Gil Halsted turned a bright light on Wisconsin’s criminal justice system, covering everything from state Supreme Court decisions to the grievances of people locked behind bars,” said Bill Lueders, president of the Wisconsin Freedom of Information Council.

“He humanized those on both the giving and receiving ends of this system, earning widespread respect as a fair and conscientious reporter. He gave his job his all, and Wisconsin is a better place for it.”

The public is invited to the March 30 event. It begins with a reception at 5 p.m., followed by dinner at 6 at The Madison Club, 5 E. Wilson St. Just 120 tickets will be sold. Tickets cost $60 and are available at: http://2017watchdog.eventbrite.com/

Proceeds support the nonprofit and nonpartisan Wisconsin Center for Investigative Journalism, the participation of young journalists in the event and a special investigative reporting workshop.

Dave Zweifel, editor emeritus of The Capital Times and a founder of the Wisconsin Freedom of Information Council, was named the inaugural winner in 2011 and serves on the award selection committee. The late Dick Wheeler, founder of the Wheeler Report and a tireless advocate for public access to the workings of state government, was honored in 2012. In 2013, U.S. District Judge Lynn Adelman, the chief author of Wisconsin’s Open Records Law and a strong advocate of the Open Meetings Law, received the award. The 2014 recipient was Milwaukee Journal Sentinel investigative reporter Dave Umhoefer. In 2015, Journal Sentinel investigative health reporter Meg Kissinger received the honor for tirelessly exposing flaws in the mental health system. And last year, attorney Robert J. Dreps was honored for being a champion of open government and representing news organizations in groundbreaking cases for three decades.

Halsted began his career in journalism late in life. He spent 10 years as a social worker and then English teacher in Bangladesh, Washington, D.C., India and Wisconsin before landing his first job as a public radio reporter in Kenosha in 1988. He worked for three years as the news director at a community college station in Panama City, Florida, before joining the staff of WPR.

Halsted produced spot stories and features for NPR’s Morning Edition and All Things Considered, as well as public radio news magazines. He has a bachelor’s degree from the School for International Training in Vermont, and a master’s in Teaching English as a Second Language from the Monterey Institute of International Studies (now known as the Middlebury Institute of International Studies at Monterey) in California. He spent his first three years of college at the University of Wisconsin-Madison.

During his career, Halsted won awards from the Associated Press, the Milwaukee Press Club and the Wisconsin Broadcasters Association. He also won a regional Edward R. Murrow award from the Radio and Television News Directors Association.

The Wisconsin Watchdog Awards event also will honor recipients of the Freedom of Information Council’s annual Openness Awards, or Opees, for their work promoting open government.

Sponsorships of the event are welcomed. Information about becoming a sponsor is available from Andy Hall at the Wisconsin Center for Investigative Journalism at ahall@wisconsinwatch.org and at https://partners.wisconsinwatch.org/about/donations/watchdog-sponsorship/