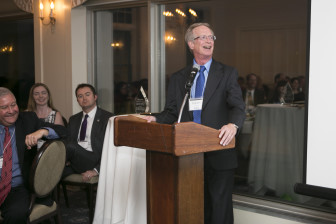 Attorney Robert J. Dreps, recipient of the 2016 Distinguished Wisconsin Watchdog Award, delivered the keynote address at the sixth annual Watchdog Awards in Madison. As a private attorney, Dreps represented dozens of newspapers and other news media organizations in state and federal cases.

Nominations are being sought for the seventh annual Distinguished Wisconsin Watchdog Award, recognizing an individual’s extraordinary contributions to open government or investigative journalism in Wisconsin.

The award is presented jointly by the Wisconsin Center for Investigative Journalism, the Wisconsin Freedom of Information Council, the Madison Pro Chapter of the Society of Professional Journalists and three additional organizations that are joining the selection committee for the first time — the Wisconsin Newspaper Association, Wisconsin Broadcasters Association and University of Madison-Wisconsin School of Journalism and Mass Communication.

“We’re delighted that three leaders of these prestigious organizations — Beth Bennett of WNA, Michelle Vetterkind of WBA and Professor Sue Robinson of the journalism school — have agreed to help recognize exceptional achievements on behalf of the people of Wisconsin,” said Andy Hall, the Center’s executive director.

Dave Zweifel, editor emeritus of The Capital Times and a founder of the Wisconsin Freedom of Information Council, was named the inaugural winner in 2011 and serves on the award selection committee. The late Dick Wheeler, founder of the Wheeler Report and a tireless advocate for public access to the workings of state government, was honored in 2012. In 2013, U.S. District Judge Lynn Adelman, the chief author of Wisconsin’s Open Records Law and a strong advocate of the Open Meetings Law, received the award. The 2014 recipient was Milwaukee Journal Sentinel investigative reporter Dave Umhoefer. In 2015, Journal Sentinel investigative health reporter Meg Kissinger received the honor for tirelessly exposing flaws in the mental health system. And last year, attorney Robert J. Dreps was honored for being a champion of open government and representing news organizations in groundbreaking cases for three decades.

Letters of nomination are accepted from journalists, news organizations and other individuals and organizations involved in open government and investigative journalism issues.

The recipient will be honored at the Wisconsin Watchdog Awards reception and dinner, scheduled for March 30 at The Madison Club, 5 E. Wilson St. The reception begins at 5 p.m. and dinner at 6 p.m.

The awards program will be preceded by the second annual “Watchdog 101: Kickstarting your career as an investigative journalist,” a free, fast-paced workshop led by the Center’s award-winning staff.

Sponsorships are welcomed. Proceeds support the Center’s investigative reporting and training of journalists, and also make it possible for students to attend the workshop and awards program.

This year’s Wisconsin Watchdog Awards will kick off three days of events in Madison celebrating investigative reporting and open government, journalism ethics, achievements of UW-Madison journalism alumni and the 125th anniversary of The Daily Cardinal campus newspaper. Highlights include:

– Friday, March 31, the UW-Madison Center for Journalism Ethics annual conference will focus on “Truth, Trust and the Future of Journalism.” Margaret Sullivan, media columnist for The Washington Post, will deliver the keynote address. Details here.

— Friday, March 31, the UW-Madison School of Journalism and Mass Communication Alumni Awards Banquet is scheduled for 6 to 9 p.m. Signup details will be available soon.

— Saturday, April 1, alumni and current staff of The Daily Cardinal will celebrate its 125th anniversary with a dinner and short program about the newspaper’s future. Details here.