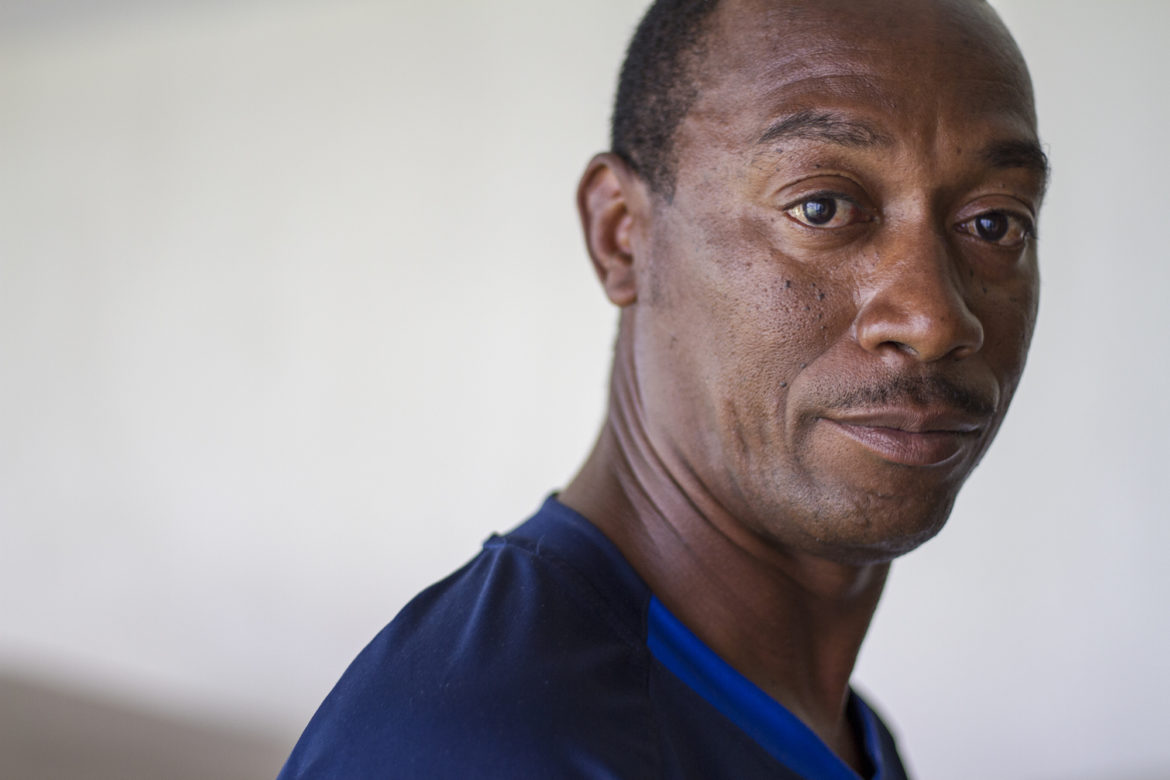 Republican and Democratic politicians across the country are deeply divided over restoring the right to vote to felons, a political fracture that affects millions of convicted criminals.

In Iowa and Kentucky, Democratic governors issued executive orders to restore voting rights to many felons — only to have them rescinded by Republican governors who succeeded them.

Democratic legislators in 29 states proposed more than 270 bills over the past six years that would have made it easier for some felons to vote but very few passed, especially in legislatures controlled by Republicans, News21 found in an analysis of state legislative measures nationwide.

Nationwide, 1 in 13 black voters is disenfranchised because of a felony conviction as opposed to 1 in 56 non-black voters, according to The Sentencing Project, a nonprofit organization based in Washington, D.C. that works on criminal justice sentencing policies and racial disparities.

In Wisconsin, the disenfranchisement of both black and white voters is even more stark. Statewide, about 1 in every 9 African-American adults is barred from voting because of a felony conviction. That compares to 1 out of every 50 residents in Wisconsin overall, the American Civil Liberties Union has estimated.

Wisconsin prohibits voting by felons until they are no longer under the control of the state, including parole, probation or extended supervision. People who are charged but not convicted of a crime, even if they are in jail, are allowed to vote, under state law. The League of Women Voters of Dane County recently prepared information packets including an absentee ballot and registration cards for the 900 inmates at the Dane County Jail, volunteer Marian Matthews said. 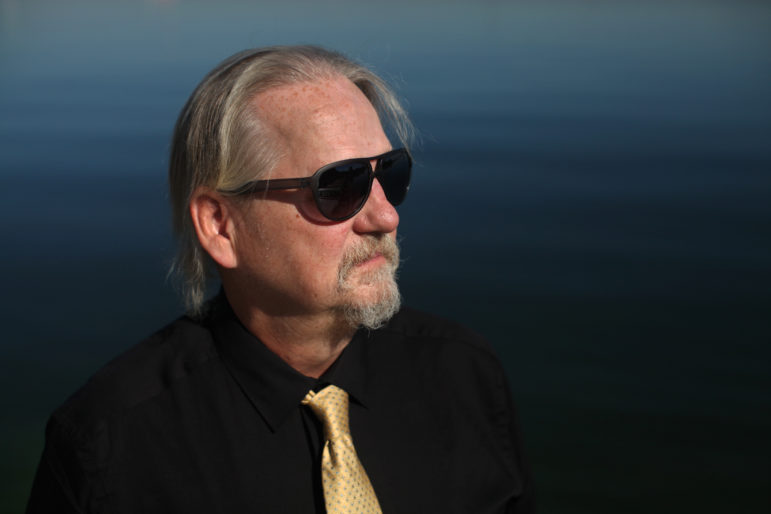 Joseph Frey, who served more than 20 years of a felony conviction in Wisconsin, including eight years for a crime he did not commit, is photographed by Lake Mendota in Madison, Wis. Frey said it was "life-changing" when could begin voting again in 2013.

Former prison inmate Joseph Frey, 57, who served a 22-year sentence for crimes including eight years on a rape in Oshkosh for which he was wrongfully convicted, said it was “life-changing” when he could begin voting again in 2013. As a person whose voting rights were stripped from him, Frey is frustrated that many people do not even bother to go to the polls.

“We have to make sure that these politicians are accountable to us — they work for us,” said Frey, who now lives in Madison. “If we don’t stand up for ourselves, then shame on us.”

Back in 2009, Democratic lawmakers in Wisconsin who ran the Legislature unsuccessfully proposed restoring voting rights to felons upon release from prison. That year, the Brennan Center for Justice estimated that 62,343 Wisconsin residents were ineligible to vote because of felony convictions; more than 37,500 of them were out of prison and living in the community.

“Across each correctional population, Wisconsin’s racial disparities in disenfranchisement are significantly higher than the national average,” concluded a 2012 report by researchers from the University of Minnesota’s Department of Sociology. “Overall, as a percentage of the voting-age population, African Americans are disenfranchised at a rate that is more than 9 times greater than it is for whites in Wisconsin.” 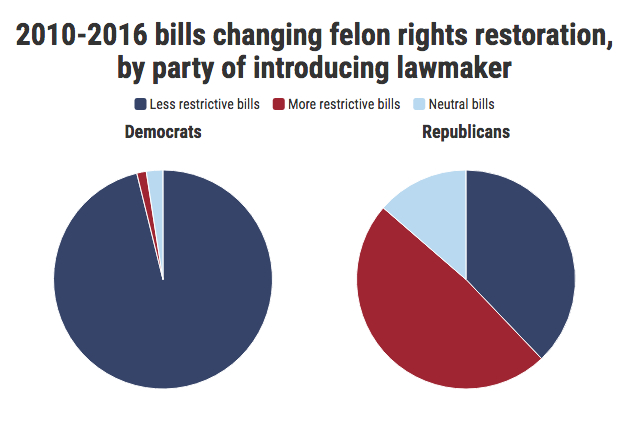 “Democrats are probably going to like it (felon voting) because they are going to expect a draw of votes, and Republicans tend to object,” said Lynn Sanders, a University of Virginia professor and expert in American government.

“This issue is very politicized because some Republicans associate the expanding franchise with more Democratic votes,” agreed Nazgol Ghandnoosh, a research analyst at The Sentencing Project. The organization estimates nearly 6 million felons are disenfranchised nationwide.

“Most of these people are not currently incarcerated,” Ghandnoosh said. “They’re living among us in their communities, but because of restrictions and laws that prevent people from being able to vote, until they’ve gone through a number of hurdles, they are not able to engage and be a part of our democracy.”

Maine and Vermont are the only states where felons never lose the right to vote, even in prison.

“You don’t lose your citizenship when you get incarcerated,” said Foster Bates, an inmate at the Maine State Prison and president-elect of its NAACP chapter.

Bates, who was convicted of murder, said more than 1,200 inmates are registered to vote in Maine. “Voting in here is everything to us,” he said.

Florida, Kentucky, Iowa and Virginia impose the strictest laws that can permanently disenfranchise felons, regardless of the offenses. Virginia’s Democratic Gov. Terry McAuliffe issued a blanket restoration of voting rights to felons earlier this year, but the Virginia Supreme Court struck it down. McAuliffe charged the decision was made for political reasons. 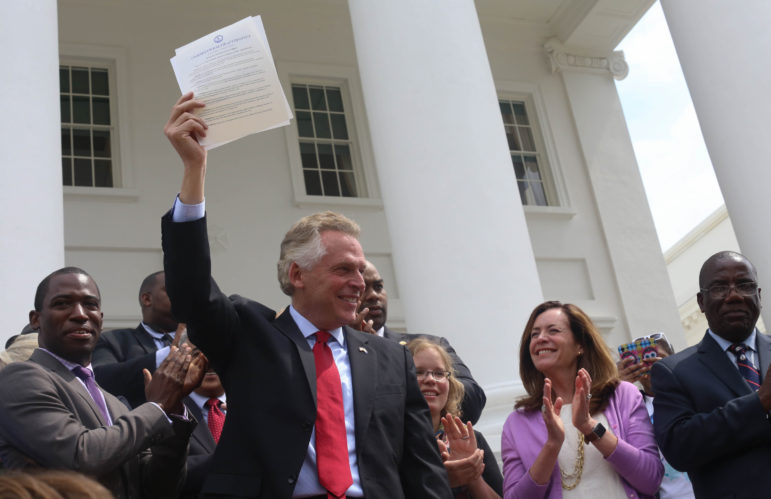 Virginia's Democratic Gov. Terry McAuliffe signed a bill restoring voting rights to all Virginia felons on April 22, 2016, in Richmond. The Virginia Supreme Court later struck it down. A News21 investigation found few efforts to expand voting rights to felons have been successful in recent years.

Florida requires those convicted of nonviolent offenses to wait five years and those convicted of more serious offenses to wait seven years before applying for clemency. Florida’s Board of Executive Clemency, which currently includes the governor, state attorney general, chief financial officer and commissioner of agriculture, decides whether to grant or deny the request. Members of the board could not be reached for comment.

Over the past six years, Florida’s Democrats have introduced nine bills that would have made it easier for felons to vote, but none passed in the Republican-controlled Legislature.

Orlando-area Democratic U.S. Rep. Alan Grayson said Florida’s law, which affects nearly 1 in 4 African-American residents, is the modern-day equivalent of a poll tax. “This is the most effective disenfranchisement tool in the country,” Grayson said. “Other efforts are amateurist.”

Without a vote, advocates say people are disconnected from politics and society.

Richard Walker, founder of Bridging the Gap in Virginia, a nonprofit organization that helps the formerly incarcerated re-enter society, spent 14 months in prison for possession of cocaine and writing bad checks to purchase and resell stamps. Since his release in 2005, he’s been traveling across Virginia to convince felons their votes matter.

“It gives them a voice. It gives them the opportunity to say ‘I am a citizen because I do vote,’ ” Walker said. “Without that, folk have the feeling that they’re marginalized and that they’re not a part of society. That’s a gut-wrenching thought to say that I have no voice and I can’t vote.” 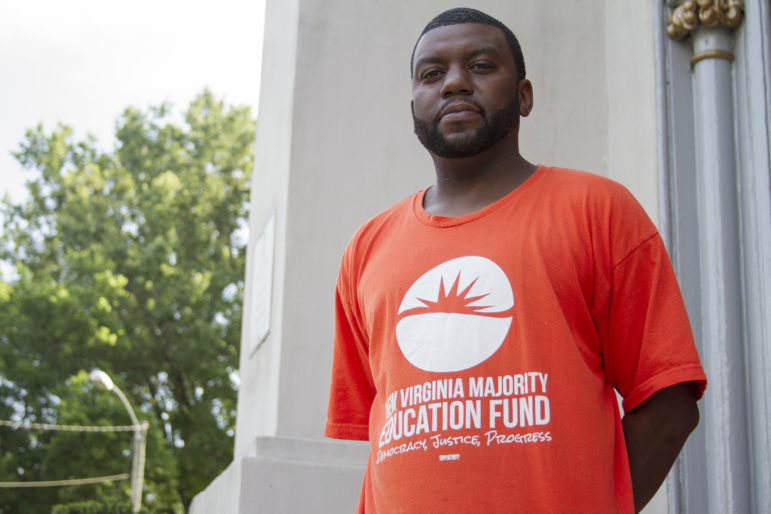 As a staff member with the New Virginia Majority Education Fund, Brandon Polly reaches out to felons living in and around Norfolk, helping them understand their rights and navigate the re-enfranchisement process.

Even before his sweeping executive order, McAuliffe said he had restored voting rights to 18,000 felons by granting individual pardons. McAuliffe told News21 at the Democratic National Convention that his actions were for moral reasons, not political reasons.

“I’m committed and passionate,” he said. “It isn’t about Election Day — it’s about letting these folks come back in and vote and feel good about themselves.”

McAuliffe issued his executive order April 22 restoring voting rights to more than 200,000 felons who had completed the terms of their sentences, including probation and parole. 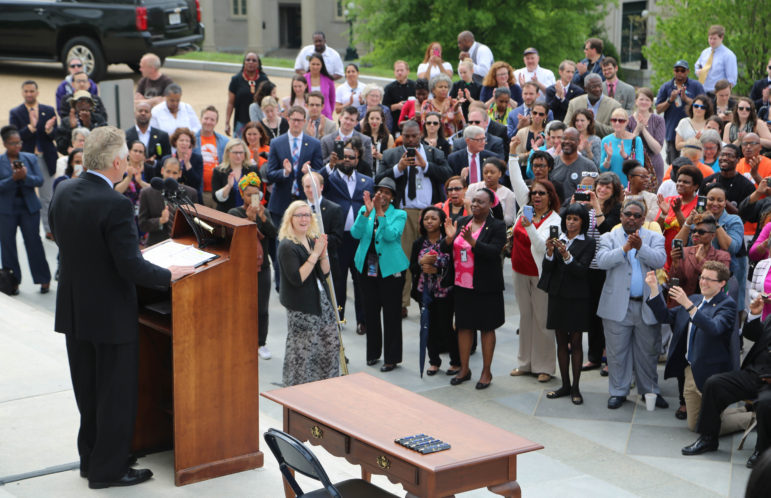 Virginia’s Democratic Gov. Terry McAuliffe spoke to a gathered crowd in Richmond before signing a bill restoring voting rights to all Virginia felons on April 22, 2016. The bill was later struck down.

The Virginia Supreme Court agreed. In a 4-3 decision in July, Chief Justice Donald W. Lemons said the court “respectfully disagreed” with McAuliffe’s belief that the governor holds the power to make blanket restorations. Howell and Norment could not be reached for comment.

Michelle Fisher of Norfolk, Virginia, had waited 30 years to have her rights restored. “Some people change,” she said. “They don’t keep going (down) the same road, and it’s an awesome thing that he (McAuliffe) did. It’s going to help a lot of people.” 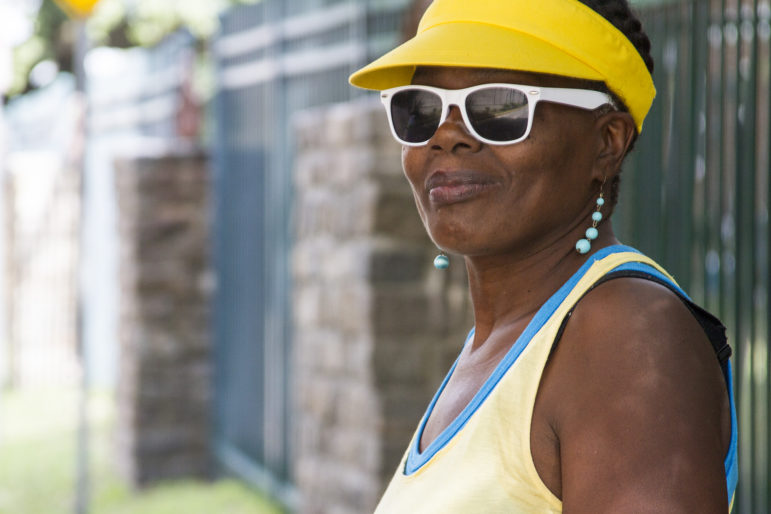 Michelle Fisher of Norfolk, Virginia, was looking forward to voting in November for the first time in her life after Democratic Gov. Terry McAuliffe restored voting rights to all felons who had served their sentences. But the Virginia Supreme Court rescinded that order as unconstitutional, and felons including Fisher are again banned from voting.

However, felons like Fisher who received their rights under McAuliffe’s order will be removed for now from the voter registrar list because of the court’s decision.

“Everyone is disappointed. They thought they were giving them a chance to vote and be a part of society,” said Brandon Polly, an employee at New Virginia Majority, a grassroots advocacy organization. “It’s like a slap in the face all over again.”

In 2005, Iowa’s Democratic Gov. Tom Vilsack also issued an executive order restoring voting rights to felons who had completed their full sentences — a move that enfranchised more than 115,000 felons, according to The Sentencing Project. The order was rescinded six years later by Republican Gov. Terry Branstad.

Today, any Iowan convicted of an “infamous crime” must submit an application to the governor for an individual pardon. And according to an Iowa Supreme Court ruling in June, every felony is considered an “infamous crime.”

“This ruling goes in line with 150 years of precedent and has been reaffirmed by the people of Iowa and their elected representatives on multiple occasions,” Iowa Secretary of State Paul Pate said in a statement.

In Kentucky, felons must also submit applications to the governor. Each is reviewed on an individual basis.

Tayna Fogle, a Kentucky felon, had her rights restored 10 years ago in a process that included three character references and an essay. It took her 15 years to get there, and she hasn’t missed a chance to vote since. In 1991, Fogle was charged with possession of a forged instrument and possession of cocaine. She served six years and nine months of a 10-year sentence. 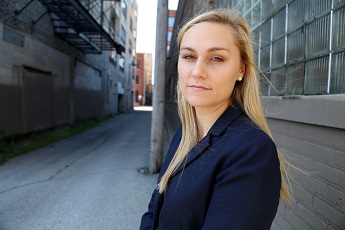 Sarah Grady, who leads the Prisoners' Rights Project for Loevy & Loevy, a Chicago civil rights law firm, has researched the history of felony disenfranchisement in Kentucky. Grady calls the process ex-prisoners must go through to regain voting rights "a silly draconian law."

The Kentucky Department of Corrections received 16,016 applications from felons between 2002 and 2015 — about 72 percent of applicants were granted their rights.

Sarah Grady, an attorney who leads the Prisoners’ Rights Project for Loevy & Loevy civil rights law firm, has researched the history of felony disenfranchisement in Kentucky. Grady called the restoration process “a silly draconian law that really has no place in modern society.”

Lexington native Mantell Stevens has tried unsuccessfully to complete the restoration application multiple times. He’s been unable to vote since being convicted of felony drug possession in 2000, serving 30 days in jail and three years’ probation.

“If I pay my taxes and I abide by the law, I want all the rights as any other citizens,” Stevens said. “That’s not too much to ask for — to be treated like anybody else.”

This report is part of a project on voting rights in America produced by the Carnegie-Knight News21 program. The Wisconsin Center for Investigative Journalism contributed to and distributed this report.