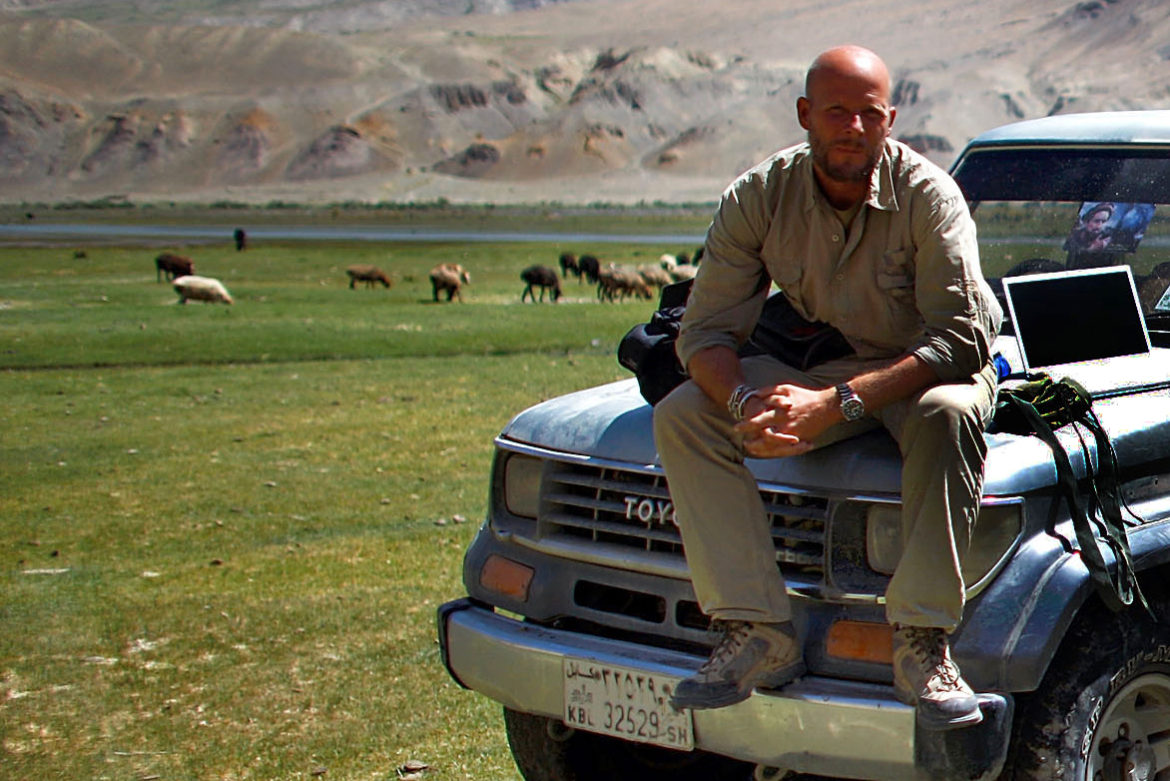 NPR photographer David Gilkey while sending photos and doing a two-way interview after covering the presidential voting day in northern Afghanistan in 2009.

I first met David Gilkey in 2006 when I was a junior photo editor at usatoday.com. He was visiting from the Detroit Free Press where he had just wrapped up an Emmy award-winning film called “Michigan’s Band of Brothers.” He was tall, imposing, grouchy and intimidating. I thought to myself: “That dude is scary!”

The following year I found myself in place as the new Picture and Multimedia Editor at NPR. Videographer John Poole and I were the first visual professionals that NPR had ever hired. A few months into my tenure, NPR decided to add another videographer to the staff, so John and I started looking through resumes and portfolios. The one that immediately rose to the top was Gilkey’s. And I’ll admit, at first, I was completely skeptical of hiring him.

But, his visual storytelling was amazing. So I called all his references, and their accolades went something like this:

“Tender.”
“Kind.”
“Caring.”
“The sweetest person you’ll ever meet.”
“A loyal photographer and friend.”
“You will not regret hiring him.”

And thank God we did. 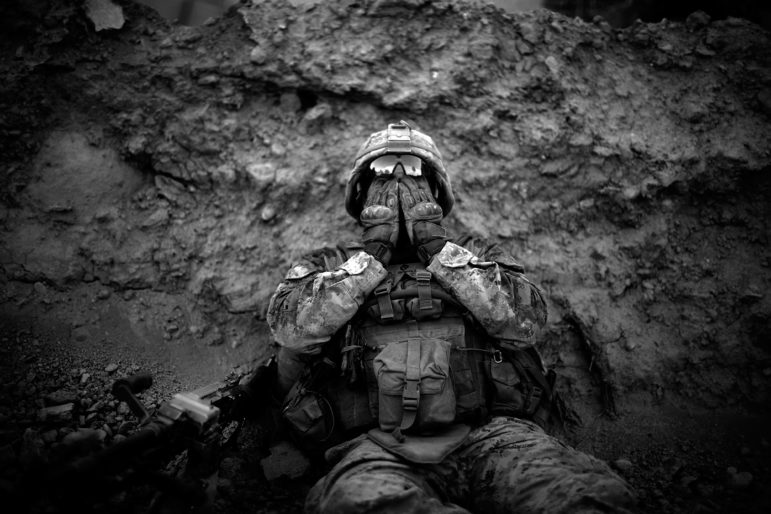 Marine Lance Cpl. Anthony Espinoza wipes the sweat out of his eyes at the end of a daylong patrol out of the Sangin District in southern Afghanistan in May 2011.

David Gilkey was not just a photographer — he was a humanitarian, and a deeply sensitive journalist who truly cared about his subjects and managed to find beauty and spirit in even the most deeply wounded people. Whether photographing a child traumatized by conflict in Gaza, a solider with amputated limbs trying to rebuild his life after war, or, simply, a beautiful landscape in Afghanistan, David seemed to have a magical way of capturing light — both physically, and spiritually, that made his photos sing.

David himself was a wild and free spirit who never seemed comfortable inside — he would pace around, almost like a tiger in a cage, asking for an assignment, begging for something to do, offering to help in any way he could. He seemed to prefer being hot, sweaty, and uncomfortable while lugging around heavy gear in the field over the air-conditioned comforts of the newsroom. I remember him showing off a military-grade helmet and flak jacket he had commissioned from some outdoor supply company, and he was as giddy as a boy at Christmas. (And he had great taste in expensive leather boots…)

But despite his hunger to be out in the field, while he was in the office at NPR, he would help anyone who asked — from an intern needing basic camera tips, to a producer going overseas for the first time, to me, his editor, who wanted to publish his photos large and loud for the world to see. And he was funny. Man, was he funny. And when he would stroll back into the office after a month away, our whole team (Fun Floor Five!) would jump up to give him a huge welcome home.

David was killed on Sunday in Afghanistan along with his interpreter Zabihullah Tamanna when their vehicle was struck by Taliban fire in a roadside ambush. He was 50. 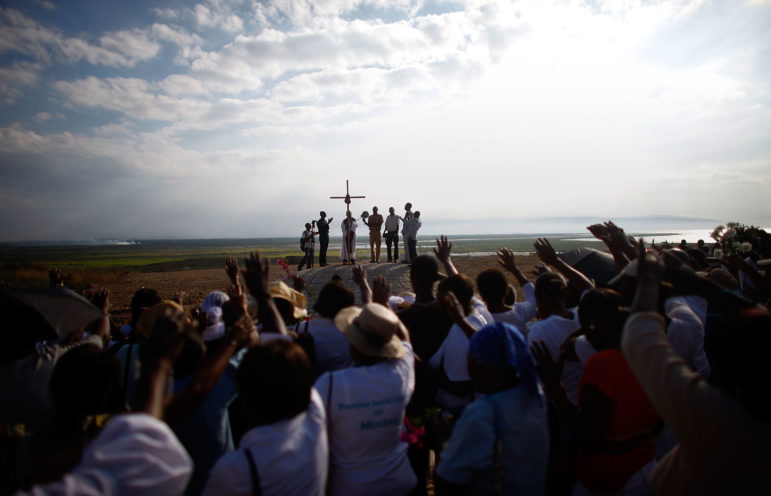 Parishioners from the Saint Louis King of France Catholic church in Port-au-Prince sing and cry as they dedicate a monument they built on the site of the mass graves from the earthquake in Titanyen, Haiti.

Hearing the news of his death on Sunday, I fell to the ground and cried. A neighbor I’d never met brought me tissues, and water, and a hug. It was a small comfort, but it was something David himself would have done — for despite his seemingly rough exterior, he was, indeed, kind to the core.

I have been amazed at the outpouring of love, gratitude and appreciation for Gilkey that has been written about him in the past few days. He touched everyone who knew him. I’ve been thinking about why. For all David’s complaining and moaning about everything under the sun, he was brutally honest about his own pain and suffering, and he was a damn good listener too. Combine those two traits and you have someone who you feel close to, even after the briefest interaction. So yes, he touched hundreds, thousands, of the people who met him in person, and even more who saw his photos and were moved by them. He was special and unique. An artist. A renegade. A soldier. A fine and tender soul. 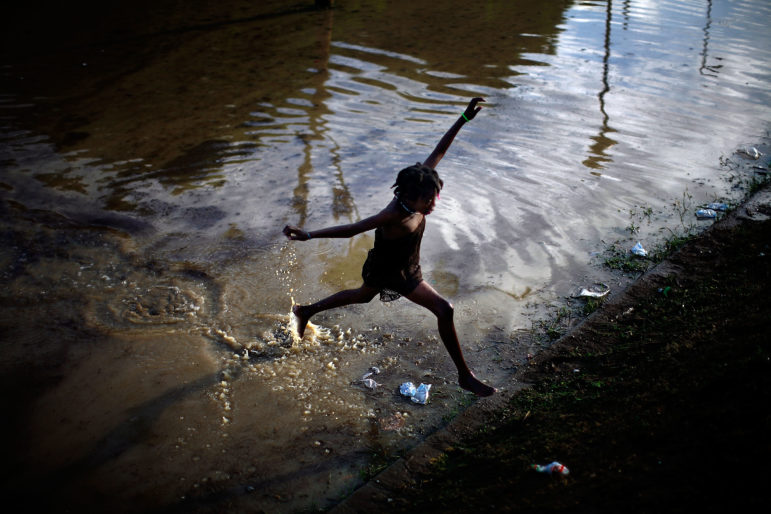 A little girl jumps across a flooded field containing the sewage runoff from the Mais Gate Camp after heavy rains in Port-au-Prince. Quake survivors were trying to stay dry and dig out of the mud in the tent camps of the Haitian capital, a warning of fresh misery for the 1 million homeless living in the streets and in IDP camps one month after the devastating earthquake.

Read more about David Gilkey and view his images here:

David Gilkey Was ‘An Incredibly Thoughtful’ Photographer In The Midst Of Plight by Jason Beaubian, NPR

Coburn Dukehart is the digital and multimedia director for the Center. Her role includes directing its visual strategy, creating visual and audio content, managing digital assets and training student and professional journalists. Dukehart has a master's degree in photojournalism from the University of Missouri, and has previously worked as a senior photo editor at National Geographic and NPR. Her multimedia work has been honored with a Webby, a Gracie, a Murrow and duPont awards, and she was nominated for a national Emmy. She specializes in documentary storytelling and visual reporting, and is a member of the National Press Photographers Association and Investigative Reporters and Editors. She is based in Madison, Wisconsin. She can be reached at cdukehart@wisconsinwatchmediapartners.wpcomstaging.com