A blasting operation at Pattison Sand Co.'s surface mine in Iowa is seen on Sept. 14, 2015, from across the Mississippi River in Bagley, Wis. Homeowners Jim and Kathy Kachel say dust from the mine has gotten inside of their home.

A controversial frac sand mining company that recently opened a site in Wisconsin is facing opposition to plans for a sevenfold expansion of its underground mine in Clayton County, Iowa.

Pattison Sand Co. has requested rezoning of 746 acres of land from agricultural to heavy industrial for eventual expansion of its underground mine from its current size of about 100 acres. The site, which includes surface mining on some of its 1,600 acres, lies along the Mississippi River directly across from Bagley, Wisconsin. Many of its roughly 150 employees live in southwestern Wisconsin. 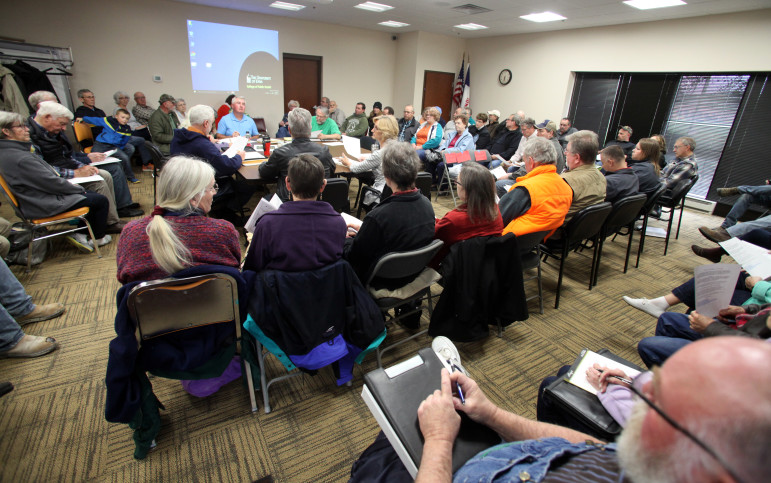 The Mine Reserve Expansion Study Committee meets in the Clayton County office building in Elkader, Iowa, on April 28. The committee was formed to determine the environmental, economic and aesthetic impacts of Pattison Sand’s proposed mine expansion. More than 60 people attended the meeting, where two experts on air quality from the University of Iowa spoke.

Since Pattison Sand’s Clayton County site began operations in 2005, it has racked up more workplace violations than any other industrial sand mine in the United States, according to data from the Mine Safety and Health Administration (MSHA) analyzed by the Wisconsin Center for Investigative Journalism. Among the violations is a 2008 accident in which a front-end loader with a defective rearview mirror backed over a worker, killing her.

Patrick O’Shaughnessy, a professor of occupational and environmental health in the University of Iowa engineering college, told members of a county committee studying expansion on April 28 in Elkader, Iowa, that it would be wise to review the mine’s record and reputation when considering the proposal. 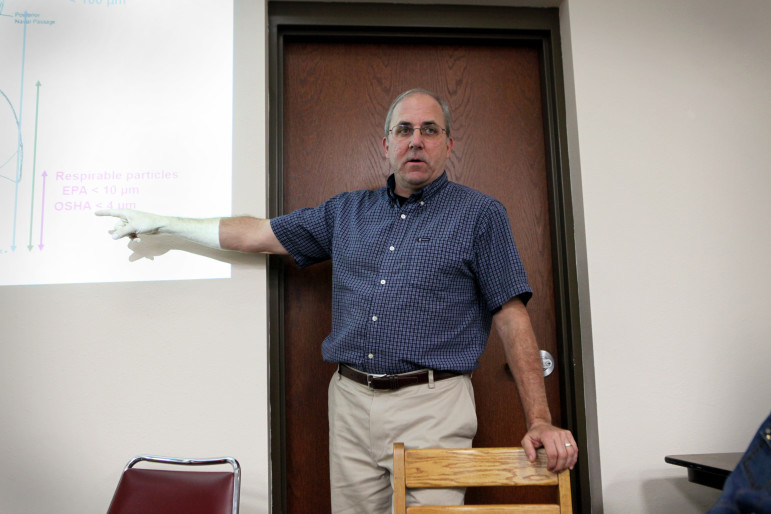 Patrick O’Shaughnessy, a professor of occupational and environmental health in the University of Iowa engineering college, speaks at a public meeting of the Clayton County Mine Reserve Expansion Study Committee in Elkader, Iowa. O’Shaughnessy said although residents living around Pattison Sand Co.’s proposed expansion face a low risk of inhaling airborne silica particles from the mine, the mine’s overall record should also be considered.

“There are good apples and there are bad apples in every industry, from swine rearing to sand mining,” O’Shaughnessy told the committee before a crowd of more than 60 people. “Is this someone who has flagrant violations constantly, or is this someone who’s typically got a good sense of safety for their workers, environmental consciousness, and they want to be a good neighbor?”

Nevertheless, O’Shaughnessy told members of the Mine Reserve Expansion Study Committee that residents living around the proposed expansion face a low risk of inhaling airborne silica particles from the mine. Inhaling silica can cause silicosis, an irreversible and sometimes fatal lung disease that can lead to cancer and tuberculosis.

The mine produces sand for hydraulic fracturing, or fracking, which involves injecting water, fine-grained sand and chemicals at high pressure to break apart underground rock and release trapped oil and natural gas.

According to the Center’s analysis, between April 2005 and January of this year, Pattison Sand’s site in Clayton County had 934 MSHA violations for which the company paid $279,000 in fines. Wedron Silica Co. in Illinois — the industrial sand mine with the second most violations in that time period — received 501 violations.

According to the data, little has changed since a 2013 Wall Street Journal analysis found that mining safety officials had cited Pattison Sand more than any other sand or gravel mine in the country. Among the violations identified by the Center, 235 were racked up since January 2013. 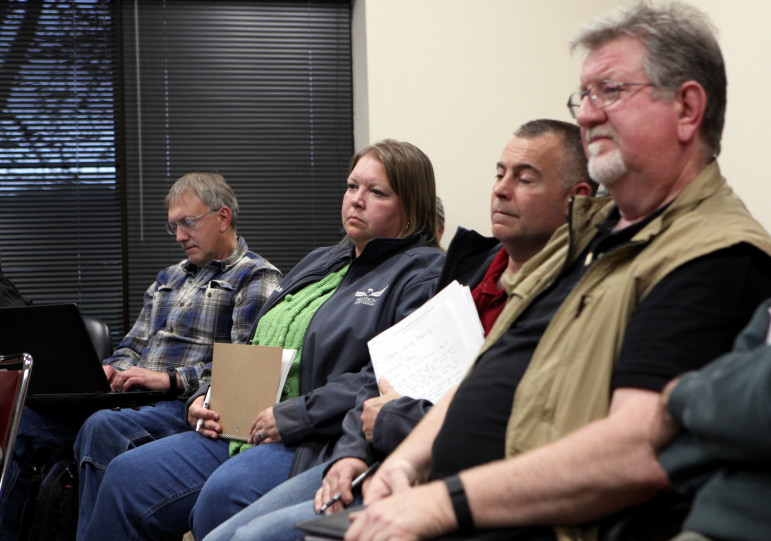 In addition, the Center found that 55 Pattison Sand employees have filed workers’ compensation claims for injuries sustained at the Iowa location between 2005 and January of this year. Claims include fractures, dislocations, sprains, hernias and heat prostration. Two of the claims were filed for respiratory problems.

In an interview, Christopher Hensler, district manager for MSHA’s north central district, said the regulatory agency’s inspectors have spent a lot of time at Pattison Sand’s Iowa site, but the sheer number of violations does not necessarily indicate a larger problem.

“The bulk of their violations are very simple electrical violations and defects of equipment that affect safety,” he said. 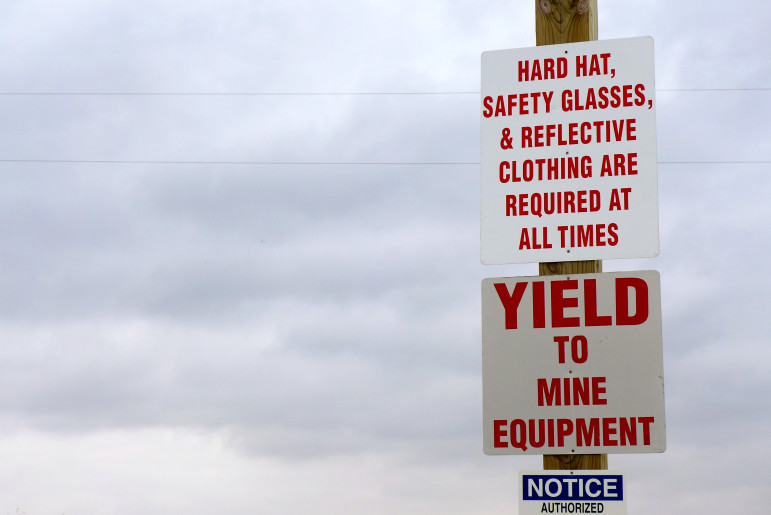 Safety signs are seen outside a frac sand mine owned by Pattison Sand Co. in Bridgeport, Wis. The mine, whose status is currently listed as "intermittent," has received seven violations since it began operations in 2013.

One 2008 violation involving defects of equipment, however, resulted in a fatality. In that incident, a front-end loader backed up, striking and killing a worker. MSHA’s investigation report found the accident was caused in part by the equipment’s defective rearview mirror and the lack of visible reflective material on the employee. Pattison Sand was fined $70,000 for that violation.

A 2014 fire and multiple roof collapses in 2011 also generated violations that resulted in temporary shutdowns. The collapses and an ensuing legal battle shuttered the underground portion of the mine for several months in 2011 and 2012.

Other infractions at Pattison Sand’s Iowa site include exposing workers to harmful airborne contaminants, failing to have protective equipment and clothing, and neglecting to provide at least two escapeways to the surface in the mine. 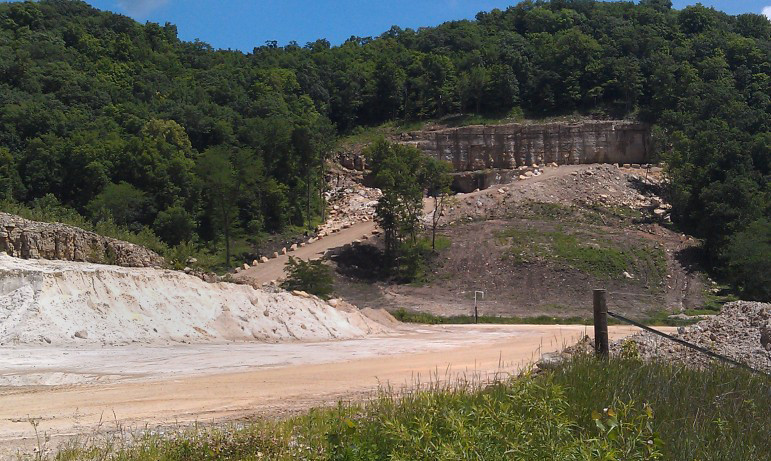 An entrance on the west end of the Pattison Sand Co. site in rural Clayton County, Iowa, is seen in 2014. The company’s mining facility in Iowa has received more workplace violations than any other industrial sand mine in the United States, according to data from the Mine Safety and Health Administration.

Andy Garcia-Rivera, a former industrial hygiene compliance officer for the Occupational Safety and Health Administration, said although mines do tend to have many violations, the number of infractions Pattison Sand’s Iowa location has amassed is “unusual.”

“It tells me that there’s something wrong,” said Garcia-Rivera, who also directed environmental, health and safety compliance for the University Wisconsin-Madison campus. “Sometimes employers do take shortcuts.”

Tim Adkins, who joined Pattison Sand 14 months ago as its health and safety director, said after the April 28 meeting that claiming Pattison Sand’s record is the worst in the industry is a “terrible, terrible, misconception” and an “out-of-context statement to make.” He attributed some of the past violations to lack of experience by the Pattison family, who used to store and ship grain from the underground caverns that are now mined. 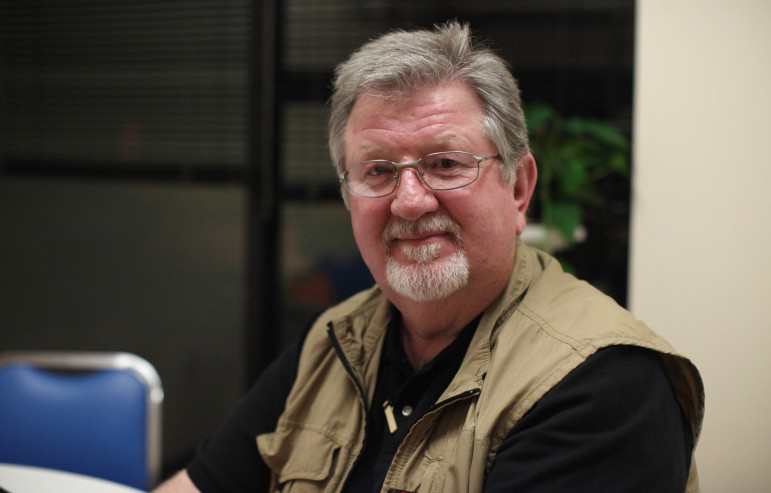 Pattison Sand Co. health and safety director Tim Adkins is seen after the meeting of the Mine Reserve Expansion Study Committee. Adkins said labeling Pattison Sand’s workplace violations record as the worst of its kind in the country is a “terrible, terrible misconception.”

Adkins added that underground mines such as Pattison Sand’s generate more violations because they are inspected twice as often as surface mines, four times a year versus two.

“Pattison Sand is a good player, good operator,” Adkins said. “They care about their employees, they take extra steps to go above and beyond MSHA requirements, MSHA standards.”

But even when compared to other similar underground mines, Pattison’s track record is not stellar. In 2010, 2011 and 2014, the company’s Iowa mine had above-average rates among underground metal and nonmetal mines of violations deemed “significant and substantial” by MSHA. Data prior to 2010 were not available.

Adkins said Pattison Sand works very closely with MSHA to ensure compliance. That was not always the case. 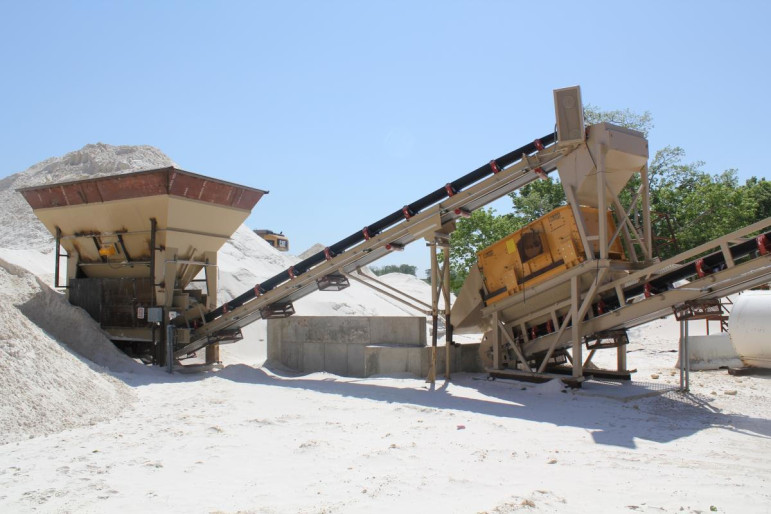 At Pattison Sand Co., seen here in 2011, fine-grained silica sand is funneled onto conveyor belts that move it through a giant, hissing rotary dryer, which uses heat to dry any wetness the sand retains after being washed. Some residents living around Pattison Sand’s proposed expansion at its site in Clayton County, Iowa, are concerned about being exposed to silica dust, which can cause lung damage if inhaled.

In 2011, Pattison Sand sued the agency after it shut down the majority of the underground mine following multiple roof collapses, including one in which at least 30 tons of rock fell onto an excavator; the miner operating it was unhurt. The lawsuit and appeals kept the underground part of the mine closed for several months.

Besides Pattison’s Iowa mine, MSHA lists only two other underground industrial sand mines in the country. Both are located in Pierce County, Wisconsin, and operated by the Wisconsin Industrial Sand Co. Since 2005, one of the mines has received 279 violations — a fraction of the number racked up by Pattison. The other, operating only since 2008, has received 127 violations. 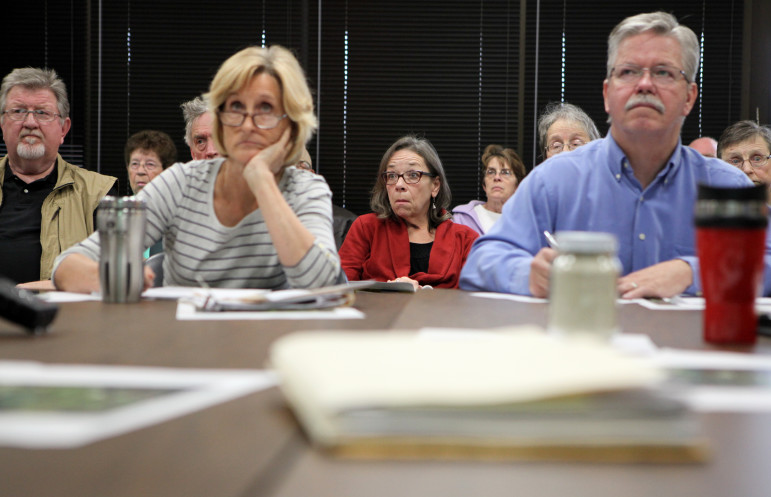 Kathy Kachel, center, a Wisconsin homeowner whose house overlooks Pattison Sand Co.’s Iowa operations, reacts to testimony given by University of Iowa professor Patrick O’Shaughnessy at a meeting of the Mine Reserve Expansion Study Committee in Elkader, Iowa. In the foreground are committee members Anne Osmundson and Tom Blake.

Kathy Kachel, who attended the meeting, blames Pattison Sand’s Iowa mine for the white sand she dusts inside her house. She lives in Bagley and can see the facility from her porch. Kachel would like to see it shut down.

“There is a proliferation of silica (sand) at this point for fracking,” Kachel said. “It’s not healthy for anybody — the environment, the wildlife, my grandchildren.”

In Wisconsin, Pattison Sand operates a surface mine in Bridgeport, about a 30-minute drive northeast of its Iowa site. Four Bridgeport residents and the Crawford Stewardship Project, an environmental group that promotes sustainability and local control of natural resources, tried unsuccessfully to block that mine. Its status is currently listed as “intermittent” based on the number of hours worked at the site.

Since it began operating in August 2013, the Bridgeport mine has received seven violations for which the company paid $824 in fines. Those violations include failing to notify MSHA before starting operations, neglecting to prepare a material safety data sheet for each hazardous chemical the mine uses or produces, failing to provide first aid materials, and failing to provide safe means of access to travelways.

Garcia-Rivera said violations at mines that are not yet fully operational, such as Pattison Sand’s Bridgeport site, are to be expected. MSHA is only required to inspect such intermittent surface mines once a year. The mine expansion committee plans to meet again on Wednesday.

Digital and multimedia director Coburn Dukehart contributed to this report. The nonprofit Wisconsin Center for Investigative Journalism (www.WisconsinWatch.org) collaborates with Wisconsin Public Radio, Wisconsin Public Television, other news media and the University of Wisconsin-Madison School of Journalism and Mass Communication. All works created, published, posted or disseminated by the Center do not necessarily reflect the views or opinions of UW-Madison or any of its affiliates.

Bridgit Bowden is the special projects reporter at Wisconsin Public Radio. Previously, she was the Mike Simonson Memorial Investigative Reporting Fellow at WisconsinWatch.

One thought on “Controversy on Wisconsin-Iowa border as frac sand mine, No. 1 in violations, seeks to expand”