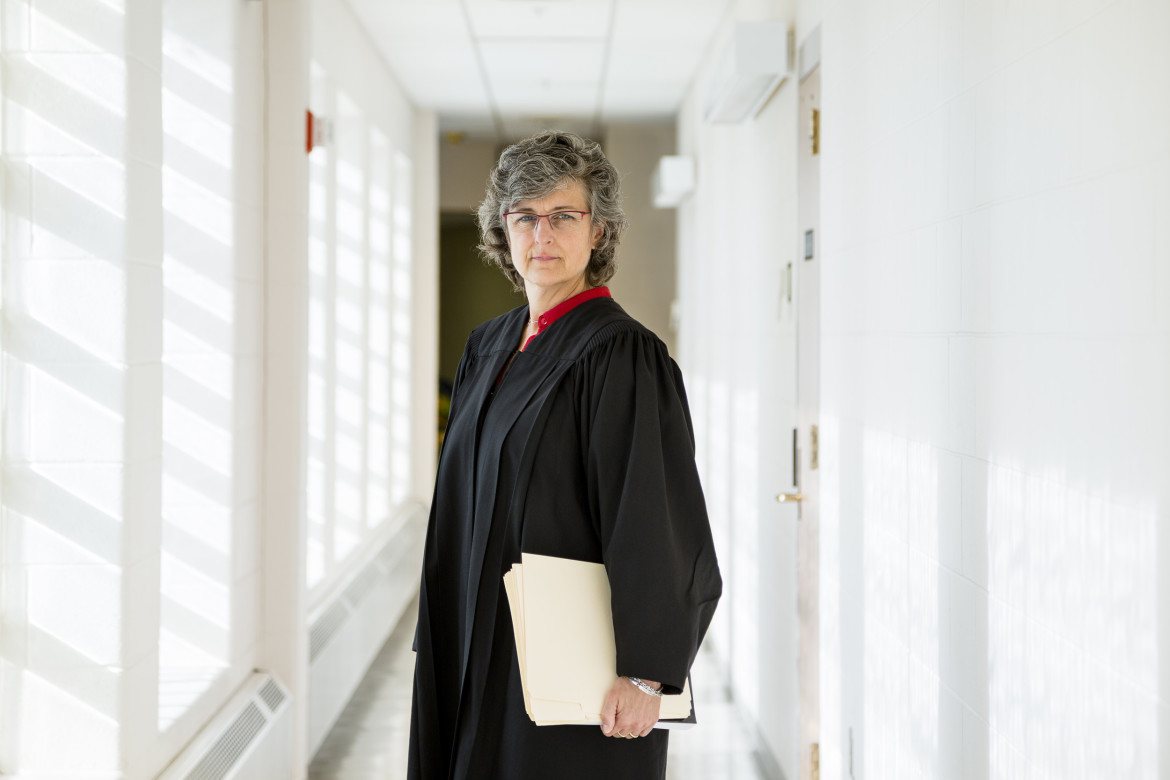 Milwaukee County Circuit Judge Mary Triggiano uses a trauma-informed approach when working with adult defendants and juvenile offenders. She was photographed at the Juvenile Justice Center in Wauwatosa in 2015.

More on Trauma-informed care from WCIJ

<!–
A day in trauma-informed court: Parents work to regain custody of their kids –>

What is your ACE score?

If you or someone you know is suffering from the effects of trauma, please contact a National Hotline for Support for Trauma or Abuse.

In most courtrooms, the story of a defendant’s terrible childhood — what types of abuse or neglect may have prompted him or her to commit crimes — is often told at the very end of the court process when a judge decides which sentence to impose.

Milwaukee County Circuit Judge Mary Triggiano, a leader in Wisconsin’s trauma-informed care movement, wants to know that story at the start. Deciding the disposition of a case “takes a lot more courage,” she said, “once you understand a person’s story and history.”

“Trauma-informed care is not a program. It’s not a project. It is a philosophy and a way of being,” Triggiano said during a recent interview. “It’s not just about pretty walls or different colors. … It’s how you interact with somebody.”

This approach, which is being promoted by the state of Wisconsin across multiple systems, was on display during a Family Drug Treatment Court session in Triggiano’s courtroom in March.

On this day, two dozen people, including case managers, other social service providers, advocates and attorneys, gather to discuss each defendant. Participants in this court are working to regain custody of their children lost because of substance abuse.

Rebecca Foley, coordinator of the drug court, is there along with Tom Miller, an attorney for the participants. There are also representatives from the Milwaukee County District Attorney’s Office and the Department of Corrections’ probation and parole department, as well as a guardian ad litem representing the interests of the children.

During the first half of the four-hour court session, the group discusses each participant’s progress toward sobriety, including their latest drug tests and attendance at counseling sessions.

Miller explains the differing roles. Recovery support coordinators are there to help clients, “trying to look for the positive in a sometimes very negative situation.” A case manager’s job is “holding their feet to the fire.”

Foley says for most participants, the program lasts 12 to 18 months, but some spend up to three years in the court so long as they continue to make progress.

After two hours, Triggiano herds the women and men of varying ages, ethnicities and economic situations into the courtroom. Observers are allowed into the courtroom only after agreeing to keep confidential the identities of the participants, who are required to be honest about often uncomfortable aspects of their lives.

The session begins with a new participant sitting in a chair in front of Triggiano. The judge says, “We want to help you along, support you and get your children back into your care.” Triggiano tells her she will have a team around to help.

The judge instructs the woman to return to court every Friday, cooperate with random urine tests and attend an alcoholism support group twice a week. The woman agrees.

The next participant is praised for attending group therapy sessions but chided for missing some individual sessions. She has been clean for five months, prompting a round of applause from the courtroom. Each participant sitting before Triggiano has one or more people standing behind or to the side for support.

Another woman wants to move up a level in the program with fewer responsibilities and more freedom. She is frustrated that she has not been able to reunite with her son.

“A lot of you, your children or child has been removed,” Triggiano tells the group. “You want to go 100 miles per hour. What we try to do here is slow you down to take care of yourselves. If you don’t do that … none of that is going to happen.” 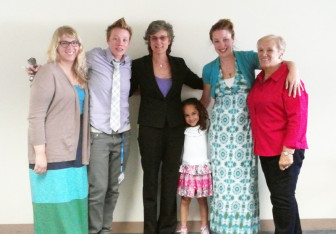 Robyn Ellis, to the right of Judge Mary Triggiano, center, is seen on the day of her graduation from Milwaukee County’s Family Drug Treatment Court in 2014. Completing the program allowed Ellis to regain custody of her daughter, Gaeliona, then 5. Also celebrating were, from left, Megan Koch, Ellis’ sister Joslyn Zinkowski, and her grandmother Marion Schroetter, far right.

Another woman is visibly angry. She limps to the chair, frowning. She says her social worker is not around. “Ain’t nobody helping me out. My daughter’s in a foster home and she wants to kill herself,” the woman says forcefully to Triggiano. “I feel like I’m telling my life story and nothing’s happened.

“Everyone’s moving up levels,” she continues. “It feels like I’m not going anywhere.”

It is a tone of voice that might spell trouble for a defendant standing before a judge. Triggiano appears unfazed.

Waiting until the woman is done talking, the judge reveals that she has been holding an application for her to move up in the program. She congratulates the participant for “holding us accountable,” adding, “You’re speaking your truth.”

Later on, a male participant tells Triggiano of his relapse. She responds: “What’s the routine? Get back on track. Process it, and move on.”

The session ends with a graduation: a woman who was facing years in prison is instead fully reunited with her daughter. The program has helped her get clean and become trained as a welder. In her graduation speech, there are hints that the woman’s childhood was far from ideal. She says she has forgiven her mother, who is sitting close by. She says she has overcome guilt and shame.

Her advice to the other participants: Stick with it.

No more ‘business as usual’ 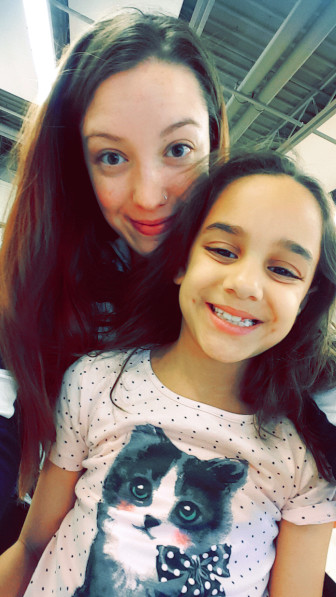 Robyn Ellis, 26, is a 2014 graduate of the Family Drug Treatment Court overseen by Milwaukee County Circuit Judge Mary Triggiano. Ellis says the supportive atmosphere in the program helped her kick her drug and alcohol addictions and regain custody of her daughter, Gaeliona.

Speaking to hundreds of child welfare and court officials gathered in September in the Wisconsin Dells, Triggiano told them they should consider trauma in everything they do.

“We as practitioners need to understand how childhood experiences, including neglect and traumatic stress, change the biology of the brain and thereby the health of the child and the adults they become,” she said. “Armed with this knowledge, we cannot continue doing business as usual because business as usual is simply not working in our system.”

Robyn Ellis agrees. Ellis, who endured an abusive and neglectful childhood and domestic abuse as an adult, turned to drugs and alcohol to escape her trauma. In 2013, she lost custody of her daughter, Gaeliona. The love and support she found in Triggiano’s courtroom, Ellis said, helped her kick her addictions and regain custody of her 5-year-old in 2014.

During her 18 months in the program, Ellis came to view the officials as role models and supporters. That made her more receptive to their suggestions for change, she said.

“Going into that situation, I thought automatically I was going to be judged,” Ellis said. “(But) everyone wanted the best for me.”

In an interview, Triggiano is asked how she knows trauma-informed care works.

“Are we specifically measuring it? No. Do I believe it has added value and helped us come to positive outcomes? Yes.”

Reporting for this story was supported by the Solutions Journalism Network and the Center on Media, Crime and Justice. The nonprofit Wisconsin Center for Investigative Journalism (www.WisconsinWatch.org) collaborates with Wisconsin Public Radio, Wisconsin Public Television, other news media and the University of Wisconsin-Madison School of Journalism and Mass Communication. All works created, published, posted or disseminated by the Center do not necessarily reflect the views or opinions of UW-Madison or any of its affiliates.