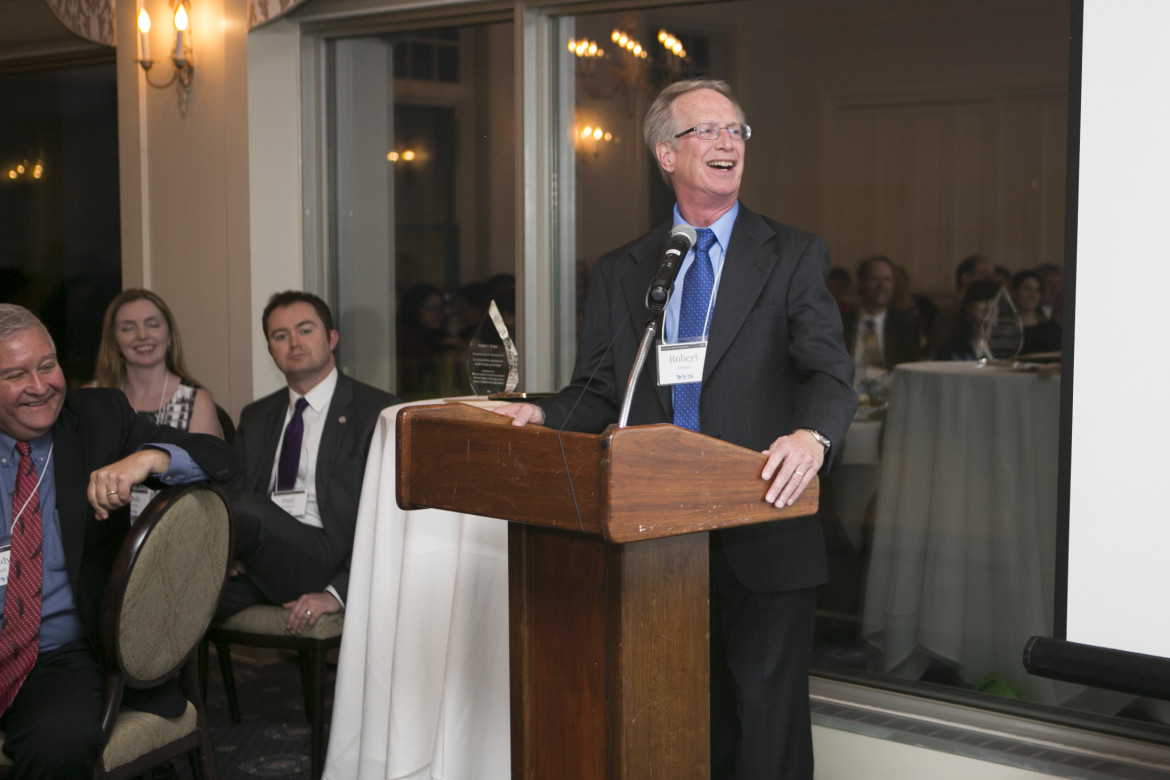 Attorney Robert J. Dreps, recipient of the 2016 Distinguished Wisconsin Watchdog Award, delivered the keynote address at the sixth annual Watchdog Awards in Madison. As a private attorney, Dreps represented dozens of newspapers and other news media organizations in state and federal cases. 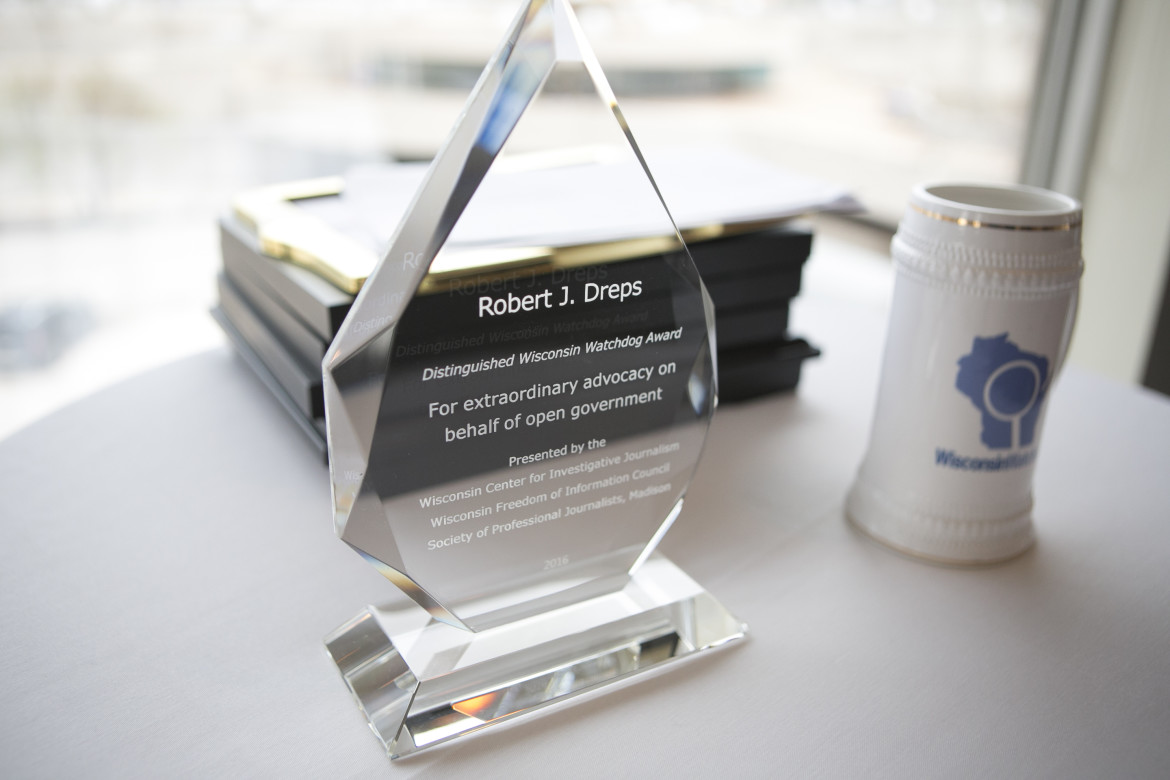 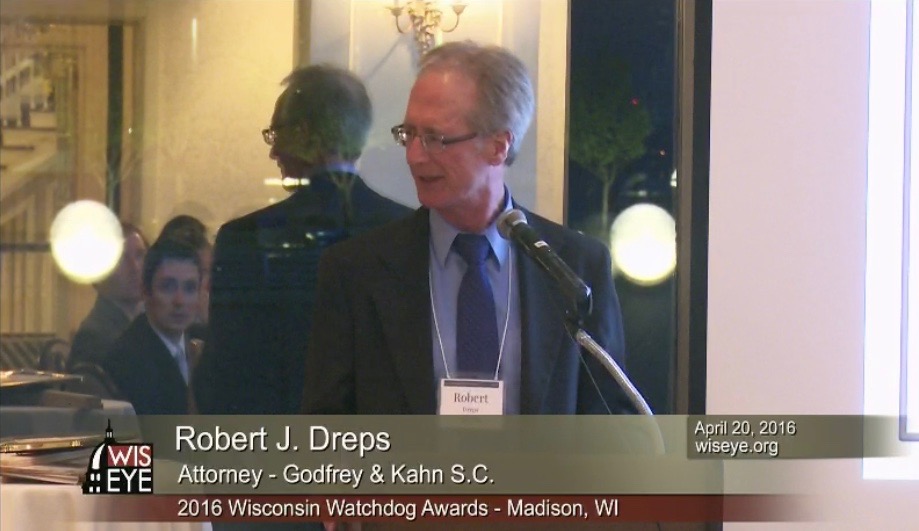 Victories in open government, spearheaded by investigative journalism and citizen activism in a year of unprecedented attacks on government transparency, were celebrated by journalists, members of the public and champions of public records laws at the sixth annual Wisconsin Watchdog Awards Wednesday evening in Madison.

Attorney Robert J. Dreps, recipient of the 2016 Distinguished Wisconsin Watchdog Award, delivered the keynote address at the sold-out event, which was hosted jointly by the nonpartisan and nonprofit Wisconsin Center for Investigative Journalism, the Wisconsin Freedom of Information Council and the Madison Pro Chapter of the Society of Professional Journalists.

“The public has demonstrated its strong support for open government, and it is now our job to engage them in our effort to maintain and strengthen that Wisconsin tradition,” said Dreps, who received two standing ovations.

Dreps said his work backing “the interests of journalists and the public in court” is the best job in the state “because arguing in favor of free speech and open government has meant that my cause was always just.”

Dreps noted that since he began working in private practice in 1985, Wisconsin media have rarely lost a defamation case.

“Our media clients have never even had to face a jury,” Dreps said. “And today, because there is no history of success in this state, few defamation plaintiffs even try anymore … Our success also, and perhaps mostly, reflects Wisconsin’s long tradition of journalistic quality and integrity.” 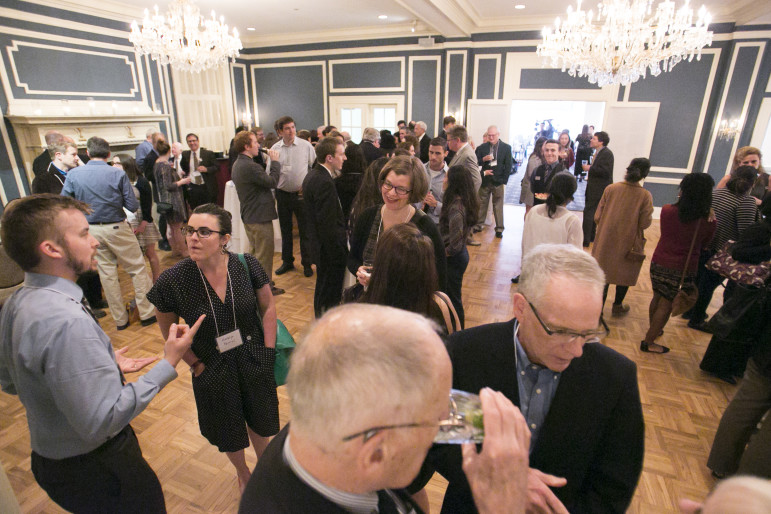 Journalists, members of the public and champions of public records laws mingle during the cocktail hour at Wednesday night's Wisconsin Watchdog Awards. The event celebrated the investigative journalism and citizen activism that led to victories in open government during the past year.

“Bob has been an advocate for Wisconsin’s newspapers and their mission of publishing the truth and holding public officials and records custodians accountable,” said Beth Bennett, executive director of the WNA. “For the WNA, Bob is a treasure whose contributions and values will be measured for decades to come.”

Dreps was nominated for the award by Bennett and Godfrey & Kahn colleagues Brady Williamson and James Friedman.

Also at the event, the Freedom of Information Council, a nonpartisan group that seeks to protect public access to meetings and records, honored winners of its annual Openness Awards, or “Opees.” The awards are given for extraordinary achievement, both positive and negative, in the cause of open government. 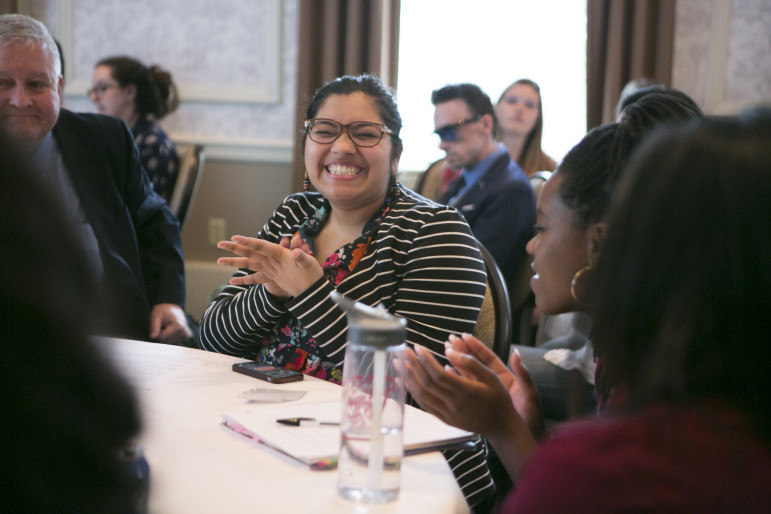 Student journalists and young professional reporters attend a free investigative reporting workshop prior to the sixth annual Wisconsin Watchdog Awards in Madison Wednesday evening. The training included sessions on how to find strong investigative stories, how to use the state’s open records law, how to use data and the art of the interview.

“It’s hard to know what to say about this last year,” said Bill Lueders, president of the Council. The period included a secretive attempt over the Independence Day weekend by Republican lawmakers to impose sweeping limits on public records access, and a widely hailed executive order issued by Walker in March directing state agencies to track and improve response times to public records requests.

“It was, in some respects, a terrible year, one that reminded us our open government laws are under attack,” Lueders said. “But it was also filled with reminders that the public is on our side, allowing us to fight back and maybe even achieve some gains.” 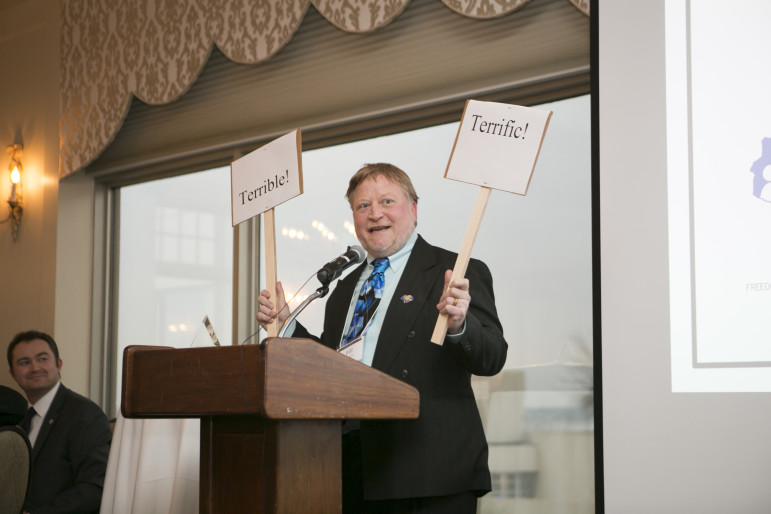 Bill Lueders, president of the Wisconsin Freedom of Information Council, holds up signs while recapping highlights and lowlights from the state's past year in open government at the Wisconsin Watchdog Awards. Lueders also awarded the Council's annual Openness Awards, or "Opees."

This year, the Opee winners included: 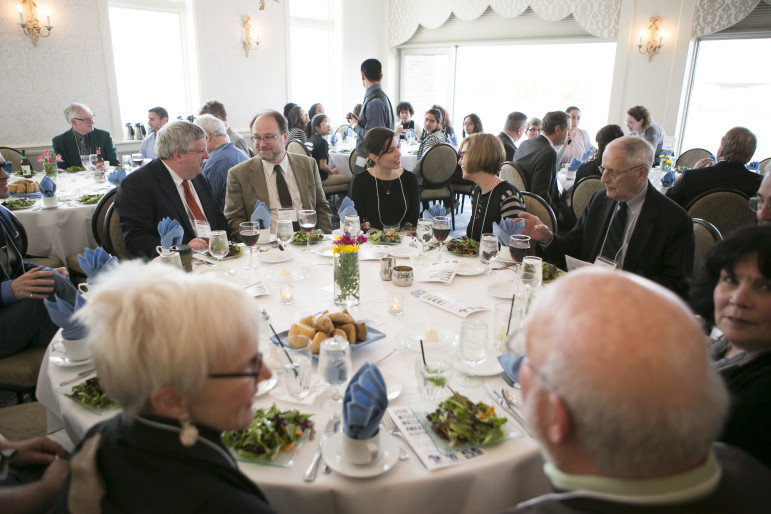 Mark Pitsch, president of the Madison Pro Chapter of the SPJ, recapped Wisconsin’s year in journalism at the event, saying, “After the Legislature and the governor sought to gut the Wisconsin open records law last year, the media, open government advocates, interest groups on the left and interest groups on the right rose up to battle these changes. … We all recognized what was at stake.”

In addition, the Watchdog Awards honored beloved University of Wisconsin-Madison journalism professor James Baughman, who died in March after a brief battle with lung cancer.

“Jim’s legacy includes many hundreds of students and colleagues whom he inspired and supported … We will work hard to live up to the high expectations he had of all of us,” said Andy Hall, the Center’s executive director. 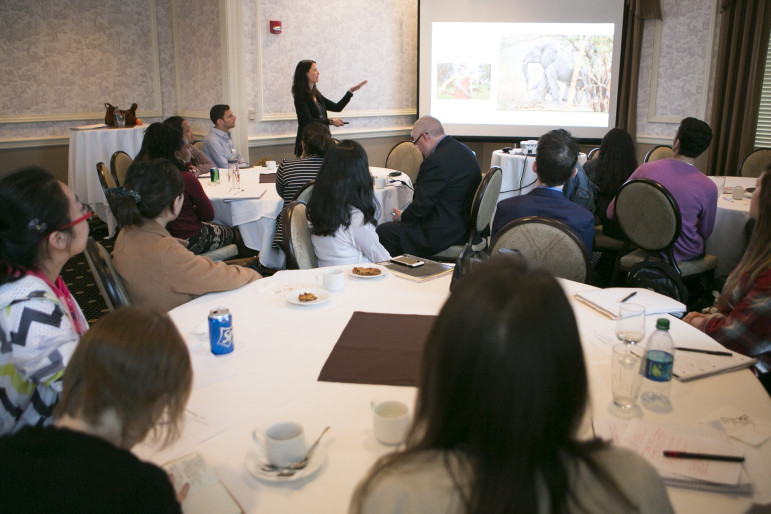 Baughman’s legacy included welcoming the Center into the School of Journalism and Mass Communication’s offices at Vilas Hall in 2009 while serving as the school’s director.

The event included dinner and a free workshop in investigative reporting techniques, attended by 45 student and young professional journalists.

All photos of the event were taken by Jentri Colello, a freelance photographer who lives in Madison, Wis. The nonprofit Wisconsin Center for Investigative Journalism (www.WisconsinWatch.org) collaborates with Wisconsin Public Radio, Wisconsin Public Television, other news media and the UW-Madison School of Journalism and Mass Communication. All works created, published, posted or disseminated by the Center do not necessarily reflect the views or opinions of UW-Madison or any of its affiliates.