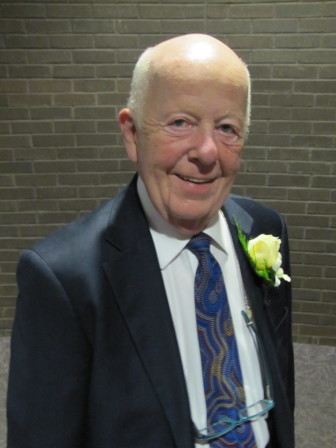 Dick Record witnessed first-hand what he says is the “deterioration” of government transparency during his 40-year journalism career in Wisconsin.

Record’s concern over this trend motivates him to steadfastly advocate for open government. It is the reason he supports the nonpartisan and nonprofit Wisconsin Center for Investigative Journalism.

“The deterioration of openness has been somewhat appalling in the last few years, particularly because we just don’t have the freedom that we used to,” said Record, a veteran news anchor and station manager in Madison and La Crosse. “It seems like people in public office and state and local government are hiding stuff from us, and for no good reason.”

In recent years, reporters and the public are facing increasing problems with long wait times and high costs for records requests, difficulty obtaining legislative drafts, and improper denials of records, among other setbacks that diminish government accountability.

Record said he admires WCIJ for “fighting the good fight.” As access to public information tightens and many newsrooms downsize in the face of declining revenue, WCIJ pours time and money into obtaining records for investigative projects while collaborating with and offering guidance to other newsrooms in the state.

Record remembers a time when openness was the standard.

“We had some people say ‘no’ and some people close up, but generally speaking, it was pretty open and we were pretty satisfied with the way it was going,” he said.

Record joined Midwest Family Radio WISM AM/FM Madison as a news anchor in 1966, reporting on Vietnam War protests and unrest in the city. In 1971, he transferred to La Crosse, where he served as general manager and morning news anchor to stations for over 40 years.

In the early years of his career, state politicians and government agencies were “fairly easy going” about granting reporters access to information the public is entitled to.

“I think we were in the upper level of openness in state government in the country,” Record said. “Nowadays it’s a little bit depressing to see some of the things that are going on.”

Problems with transparency led in 1978 to the formation of the nonprofit Wisconsin Freedom of Information Council, which provides resources and assistance to reporters on open records and open meetings laws in Wisconsin.

Record first learned about the Center through his work on the Council with WCIJ Executive Director Andy Hall, a Council board member; and former WCIJ Money and Politics Director Bill Lueders, the Council’s president.

“I think I just figured that if anything was going to be done, those people would be the ones to do it and I ought to support them,” Record said.

Since 2010, he has made multiple contributions to the Center and attends the annual Wisconsin Watchdog Awards, an event jointly presented by WCIJ, WisFOIC and the Madison Pro Chapter of the Society of Professional Journalists, which celebrates investigative journalism and open government in Wisconsin.

“I want to do whatever I can to keep (government) open,” Record said. “One way to do that is to support groups like WisFOIC and WCIJ and whoever else is working hard to keep things on an even keel for us.”

“And when I say ‘us,’ I’m talking about everyone in Wisconsin.”