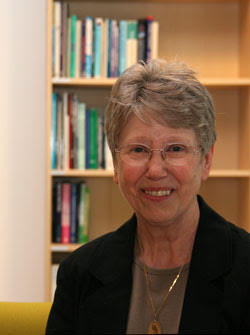 The types of news stories Sharon Dunwoody finds most compelling — and most crucial in 2015 — dig deeper than “he-said-she-said” truth claims; they use data to analyze and corroborate or refute sources’ claims on important issues.

“The Center takes a sort of evidence-based approach to analyzing the issues they tackle,” Dunwoody said. “They don’t just take truth claims and run them, but they say, ‘Where’s the data?’ ”

Dunwoody, an internationally acclaimed scholar, has taught science writing and communication for over 30 years in the UW-Madison School of Journalism and Mass Communication. She served as director of the school from 1998 to 2003.

As an educator, Dunwoody carries an upbeat message to students reporting on complex topics: You can do it.

“Unfortunately, most journalism students think they’re bad at math and bad at science, and they’re not, but as long as they feel that way, they’re not going to touch a science writing course with a 10-foot pole.”

Today, she teaches an interdisciplinary seminar, “Telling Stories about Climate Change,” which combines her background in science writing with her deep concern about the environment.

“I’ve spent all of my career now steeping myself in science issues, so I think climate change remains for me one of the dominant issues and one that is finally clawing its way up the hierarchy of most important issues,” she said.

Dunwoody remembers the initial discussions in 2007 about housing the Wisconsin Center for Investigative Journalism within the university’s journalism school in Vilas Communication Hall.

The arrangement trades office space for the Center’s commitment to train students, including classroom collaborations, guest lectures, hiring students as freelance journalists and, most significantly, a paid, year-round internship program for investigative reporters and public engagement and marketing assistants who work under the supervision of WCIJ’s professional staff.

The Center has remained faithful to that commitment since launching in 2009. Dunwoody has made multiple contributions to WCIJ’s Education Fund, which supports the Center’s internship program and educational mission. She believes the collaboration between the journalism school and WCIJ is important to sustaining quality local reporting in the future.

“I think (the Center) is doing 21st century journalism, and if it can get students excited about that, that’s how journalism is going to survive,” she said.