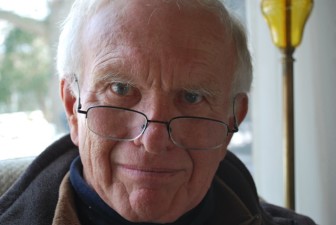 Sometimes, when author Tom Warren researches issues for his books, he feels the pull to become an advocate.

And that helps explain why, for the past two years, Warren has mailed a check to the Wisconsin Center for Investigative Journalism.

His book, “Discovering Beloit: Stories Too Good to be True?,” deals with dwindling investigative journalism in small communities, such as his current home of Beloit. He donates a portion of the proceeds from the book to WCIJ, which he says is doing work that is “critical” for Wisconsin communities.

“The Center is on the cutting edge of a good cause, and that’s teaching and learning and helping people see things that might be influencing them,” he said.

Warren retired from Beloit College in 2001 after 31 years of teaching Education and Youth Studies. For much of his career, he studied how people learn and how they are creative.

“One of the things that inevitably happens if you get into a setting like that is you ask yourself, ‘How creative am I?’ ” he said.

His research helped him decide what to do in retirement: Write stories. After all, Warren had taken journalism classes in high school, where he served as his newspaper’s sports editor, and later served as the publications editor for a higher education association.

“I was kind of a beneath-the-radar journalism enthusiast for a long period of time,” Warren said recently, as he made his first visit to the Center’s offices in Vilas Communication Hall on the University of Wisconsin-Madison campus.

“Discovering Beloit” combines three topics Warren cares about: the loss of local investigative journalism in small- and medium-sized communities, his appreciation for high school journalism education and his concern and love for Beloit.

In writing “Discovering Beloit,” Warren was also inspired by the Center’s work. He recalls attending a 2011 lecture at Beloit College that Andy Hall, WCIJ’s executive director, delivered just as he had started writing the book. There, Hall discussed the importance of local in-depth reporting and how the Center works to strengthen journalism in Wisconsin.

Although Warren is quick to remind readers that “Discovering Beloit” is a novel, it deals with issues that are familiar to the Beloit community and includes anecdotes based on real events.

In the novel, which takes place a few years into the future, a civic-minded wealthy community member in Beloit is distraught by a recent cover-up scandal and believes that reinvigorating investigative journalism in the city is one of the solutions. In turn, she funds the creation of a new high school journalism class taught by a retired reporter, Marshall Bridlington, known as “Gov.”

Gov’s assignment for his students is to dig up stories about Beloit. And they do.

Warren said one goal in writing the novel was to portray Beloit as a great community beyond some of its stereotypes.

“I hope the overall message is that Beloit is a place people would like to learn more about, and to investigate,” Warren said.

He has published three books since retiring. All align with his interests. In “An Old Caddie Looks Back: Reflections from a Town that Loves Golf and Tiger,” Warren reflects on his childhood in Rockford, Illinois, where he learned to love golf and later came in contact with a young Tiger Woods in Southern California. “Discovering Lake Superior and the Western Upper Peninsula of Michigan” is a personal and informative narrative about the years Warren spent on the shores of Lake Superior with his family.

“I’m learning by writing these books,” Warren said. “It’s like a laid-back sabbatical. I find myself becoming an advocate for some of these causes — certainly for investigative journalism.”

“The Center is doing things that are critical and important,” he added. “In a small way, I just want to say that I’m definitely one of (WCIJ’s) strongest enthusiasts.”