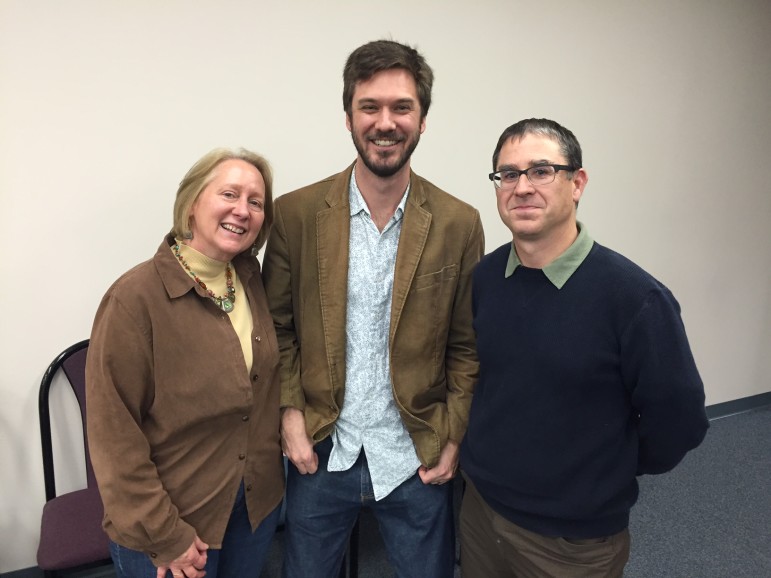 The Wisconsin Center for Investigative Journalism’s Dee J. Hall received an award for reporting from her former employer, Lee Enterprises, on Thursday.

The Lee President’s Award, the company’s highest journalistic honor, recognized Hall and Wisconsin State Journal Reporter Matthew DeFour for their investigation into a failed taxpayer-funded loan to one of Gov. Scott Walker’s top donors. The award, which was shared with State Journal Assistant City Editor Mark Pitsch, recognizes the “outstanding achievement in any aspect of print and online journalism, from reporting and writing to photography, video, graphics and presentation” in the past year among Lee’s 50 daily newspapers.

The investigation involved Building Committee Inc. of Milwaukee whose owner, William Minahan, had given Walker $10,000 on Election Day in 2010. The investigation by Hall and DeFour found one of Walker’s top aides, Administration Secretary Mike Huebsch, had pushed for a $4.3 million loan to the company, which was on the verge of collapse. The company eventually secured $500,000 from the Wisconsin Economic Development Corp. but neither repaid any of it nor created any promised jobs. The state is now suing to recover the money.

The State Journal investigation found Minahan lied on his state loan application when he said he had not been sued in the previous five years. One former employee also said he had been repaid for making a campaign donation, which would be illegal. The stories prompted calls for a criminal investigation by legislative Democrats and U.S. Sen. Tammy Baldwin, D-Madison.

As a result of the State Journal investigation and other troubles, top legislative leaders are now proposing an overhaul for WEDC.

“In the newsroom, when you are holding government officials, elected officials accountable for their actions, when we are exposing misdeeds or favoritism or bad behavior of some sort by the people that the taxpayers are paying for or electing, that’s the highest calling that we really have in the newsroom,” State Journal Editor John Smalley told staff members gathered for the award ceremony Thursday.

“That story is still rolling out and reverberating, and that agency is going to be fundamentally changed forever … and the linchpin for that was our reporting.”

Smalley called DeFour and Hall “two of the most dogged reporters you’ll ever find anywhere.”

Hall joined the Center as managing editor in June after 24 years at the State Journal. She continues to write about questionable WEDC deals for the Center, including two businesses that failed after getting taxpayer-funded loans and lack of jobs and capital spending that had been promised as part of a $62.5 million package given to Kohl’s Corp.