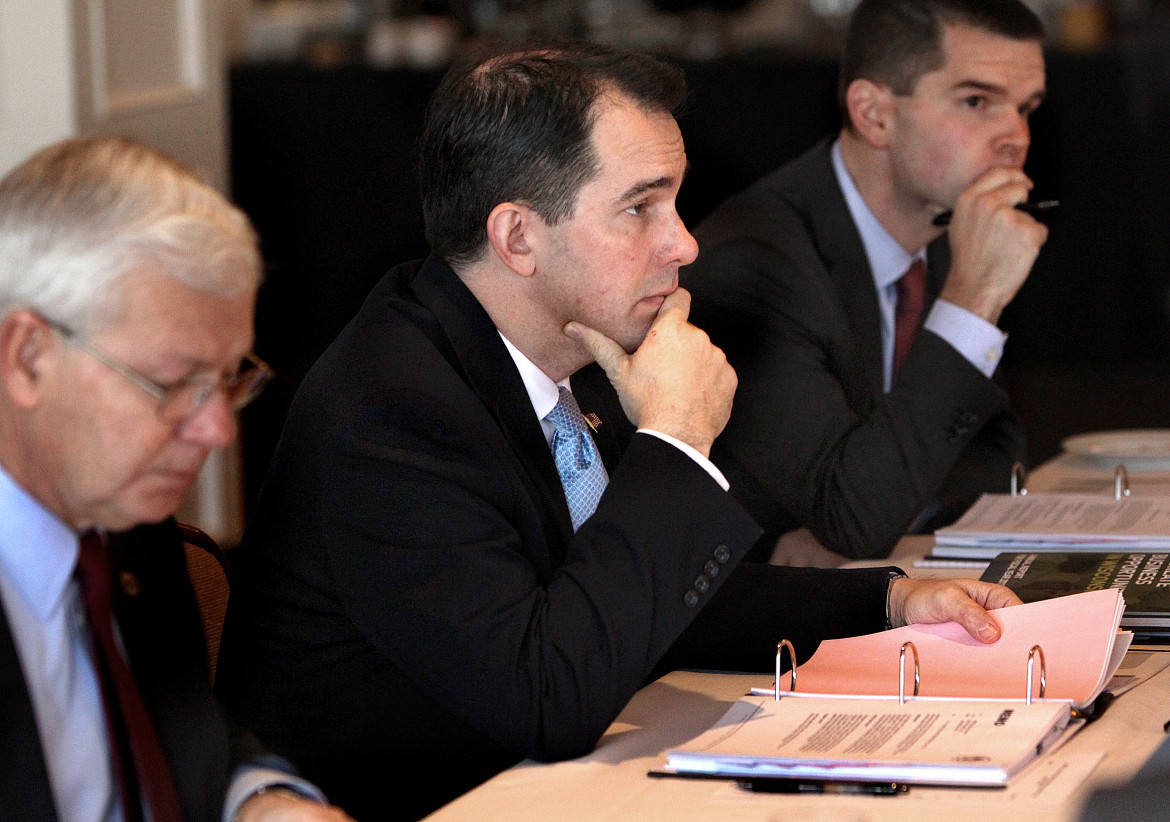 Gov. Scott Walker, then-chairman of the Wisconsin Economic Development Corp., participates in a WEDC board meeting in late 2013 in La Crosse along with CEO Reed Hall, left, and then-chief operating officer Ryan Murray. Walker removed himself in July as chairman of the board after a negative audit and critical news coverage of the job-creation agency. Murray has left the agency, and Hall will retire in September. Hall’s replacement is longtime banker Mark Hogan.

Despite signs of trouble within the companies, Gov. Scott Walker’s jobs agency loaned about $1.4 million in taxpayer money to two northern Wisconsin firms that now have failed to fully repay the loans or create hundreds of promised jobs.

The Wisconsin Economic Development Corp. sued the companies — Tomahawk Metal Products of Tomahawk and North American Finishing of Suring — along with four others for failure to repay state taxpayer-funded loans or comply with grant terms. The others sued since 2014 are TJ’s Taylor’s One Price Cleaners of Madison, Ratio Inc. of Monona, Building Committee Inc. of Milwaukee and Green Box NA Green Bay of De Pere.

WEDC made the ill-fated deals with Tomahawk Metal Products and North American Finishing in the first two years of the Walker administration as the governor attempted to fulfill a first-term promise to create 250,000 jobs. Walker fell short of that goal by about 100,000 jobs, and Wisconsin has remained in the bottom half of job-creating states throughout his tenure.

Late Friday, the agency disclosed it has settled its $360,933 claim against Tomahawk Metal Products for $125,360. In a statement, WEDC spokesman Mark Maley said the agency feared the company owner would declare bankruptcy, significantly delaying repayment to the state.

The shortfall in job creation is especially problematic for northern Wisconsin, which according to a Wisconsin Center for Investigative Journalism analysis published in May, gets less than its share of WEDC funding despite higher levels of unemployment and poverty and lower wages.

Tomahawk Metal Products left Tomahawk and was acquired by an Oak Creek company in 2014. North American Finishing is now closed. 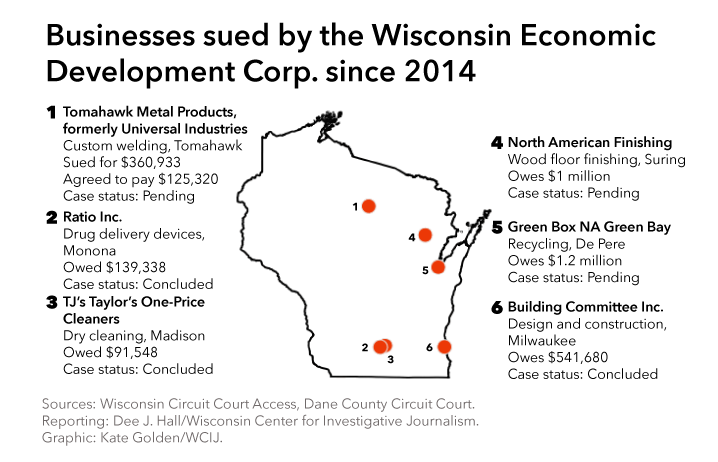 Troubles plaguing the public-private agency have been the subject of national interest as Wisconsin’s governor campaigns for the Republican nomination for president. Walker was chairman of the WEDC board until May when he asked to be removed after a negative audit and a series of critical stories were published about the agency.

The Wisconsin State Journal reported in May that the agency had made an unsecured loan for $500,000 to a failing Milwaukee company owned by a top Walker donor and pushed by a high-ranking Walker aide. The company, Building Committee Inc., falsely claimed it had not been sued in the previous five years.

WEDC acknowledged it did not investigate the company’s financial condition, and records show it continued to push for other public funding even after WEDC learned owner William Minahan planned to use the state money to pay off leases on luxury vehicles. The court judgment in that case remains unpaid.

Walker announced just before news of the BCI loan broke that he would end the WEDC loan program and refocus the agency on tax credits based on verified performance, including job creation. He cited a highly critical audit by the Legislative Audit Bureau in making the move.

The Milwaukee Journal Sentinel reported earlier this month that another company, Green Box NA Green Bay of De Pere, got $1.2 million in incentives from WEDC after its owner failed to disclose problems to the agency about the now-bankrupt company. It is now under investigation, the newspaper reported.

Tomahawk Metal Products, formerly known as Universal Industries, had been involved in a prolonged fight with the city of Tomahawk over unpaid rent on the city-owned building it occupied before WEDC loaned it money in June 2011, city officials say.

The Tomahawk Leader newspaper reported in 2011 that the company’s owner, Emil Johnson, was nearly $160,000 behind in rent and unpaid taxes on the former Harley-Davidson location. The city eventually agreed to sell Johnson the building, but that ended in 2014 when the firm closed and the building reverted to Tomahawk, said the city’s clerk-treasurer, Amanda Bartz.

In February 2011, months before Universal Industries got its state loan, the business also was facing hefty fines for alleged violations of federal Occupational Health and Safety Administration regulations for failure to provide hearing protection to its workers and other problems. OSHA reached a settlement with the company but the hazards were not abated, and in 2013, the agency fined the company $61,600.

Dane County Circuit Court records show the state had sued Tomahawk Metal Products for $360,933 on the $375,000 loan to the custom welding and fabrication company. The financing was conditioned on creating 75 jobs, retaining the company’s 22-person workforce, buying equipment and for working capital, according to the lawsuit, which the agency said now is settled.

WEDC extended repayment of the loan twice after the company failed to make payments between March 2012 and July 2014.

Tomahawk Metal Products, formerly known as Universal Industries, occupied this city-owned building in Tomahawk until the business closed there in 2014. The company was delinquent on its taxes and rent before the Wisconsin Economic Development Corp. loaned it $375,000 for expansion in 2011. WEDC sued and settled with the company for $125,320.

Ken Maule, executive director of the Lincoln County Economic Development Corp., confirmed that Universal Industries was a viable company but said that he had never heard of Tomahawk Metal Products. Records show owner Johnson changed the name of the company in 2014.

A message left at Johnson’s home and his attorney’s office were not returned.

“They were in business and they did have substantial — 10 to 15 — employees, and they were very well paid,” Maule said. “They were doing some high-end welding. It required a lot of skilled knowledge of the welding trade.”

Maule recalled some discussion about expanding Universal Industries but “the recession hit them very hard.”

In a statement, Maley said state officials were aware of the OSHA violations when they made the loan. He added the contract was negotiated by the former Department of Commerce — days before WEDC was formed — and before WEDC implemented policies and procedures “including conducting background checks on applicants.”

‘Every chance to succeed’

WEDC is seeking more than $1 million from North American Finishing, a wood floor finishing business that operated for a time in the Oconto County village of Suring, according to the suit, first reported by the Journal Sentinel. Owner Tim Flaherty had promised to create 250 jobs in the business located in a former Evenflo furniture factory in the village’s downtown.

Before the agency loaned money to North American Finishing in early 2013, it was alerted to Flaherty’s role as defendant in a $17.2 million civil lawsuit filed in 2010 against business associate Gary Ort, according to records released to the State Journal and provided to the Wisconsin Center for Investigative Journalism for this report.

But the litigation involving Gary Ort was resolved one day before North American Finishing got its loan from WEDC. Allegations of fraud — that Ort had diverted assets to Flaherty and others for less than their value to avoid turning them over to a bank — also were withdrawn as part of the settlement, according to records from the U.S. District Court in Milwaukee.

WEDC spokesman Mark Maley sent the State Journal a letter showing WEDC raised concerns about Ort and got assurances from the North American Finishing owner that Ort was only a consultant, not a partner or investor, in the proposed $27 million project. The records released to the State Journal, however, do not mention the allegations of fraud leveled against Flaherty and his company by Greenstone Farm Credit Services.

Maley said it is not unusual for some economic development projects to fail. In a statement sent to the State Journal, Maley noted that “our loan portfolio has a higher risk than those of a bank – and that’s by design.”

Maley and others defending the agency have said numerous policies were put in place to avoid the myriad problems WEDC faced in its early years.

“In this case, we provided a piece of the financing to a project that had the potential to create over 250 jobs in the village of Suring — which has a population of 544,” Maley said. “It cannot be overstated the potential economic impact a business like this could have had on Oconto County.

“When the company had some early struggles, we amended the contract — as we regularly do for startups — to give it every chance to succeed and bring those much-needed jobs to northern Wisconsin.”

After it got financing from WEDC, North American Finishing began production, reopening a factory that had been closed for a decade in the village about 45 miles northwest of Green Bay.

According to an amendment to the loan filed by WEDC in August 2014, North American Finishing could not make its payments because “the project to get the mill running did not get completed on the planned tímeline.” At the time, the company reported creating 24 jobs.

“The company is behind because of contractor delays, equipment breakdowns, and etc. This has caused delays in getting the product to the market so the company is not receiving sales revenue to be able to start paying loans,” according to the staff recommendation for a 12-month extension.

Eight months later, in April, WEDC sued the company for repayment. The case is pending.

James Kohlwey, a village of Suring trustee, said around 14 months ago, North American Finishing had about three dozen employees and was turning out high-quality flooring.

But the business closed, and court records show the building, which is in the village’s tax-increment financing district, is in foreclosure. The village is now trying to reclaim an adjacent lot it sold to the company for $1, Kohlwey said.

He added that officials are working with one of North American Flooring’s investors — not Flaherty — to see if the business can be revived. A message left with Flaherty was not returned.

Paul Ehrfurth, executive director of the Oconto County Economic Development Corp., said he is hopeful the talks will revive the company, which he believes could be profitable.

“There is a potential it could recover, in which case we come out OK,” Kohlwey agreed, but said “I wouldn’t take it to the casino and bet on it, though.” Wisconsin State Journal reporter Matthew DeFour contributed to this report. The nonprofit Wisconsin Center for Investigative Journalism (www.WisconsinWatch.org) collaborates with Wisconsin Public Radio, Wisconsin Public Television, other news media and the UW-Madison School of Journalism and Mass Communication. All works created, published, posted or disseminated by the Center do not necessarily reflect the views or opinions of UW-Madison or any of its affiliates.