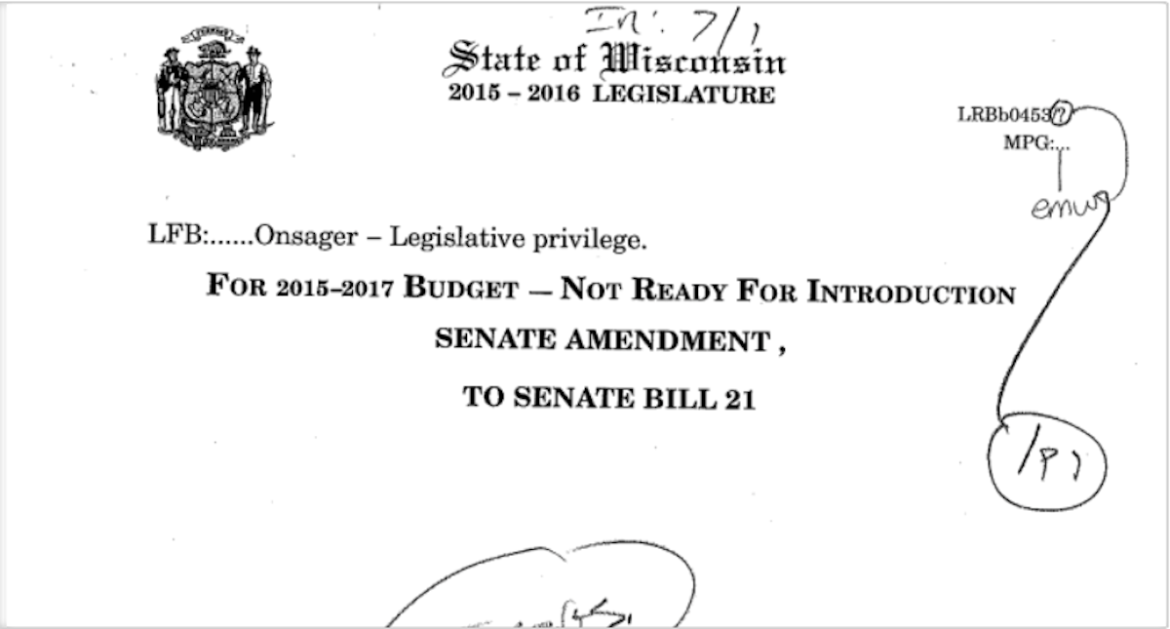 The 60 pages of Motion 999 drafting documents only showed partial names or the initials of Legislative Fiscal Bureau and Legislative Reference Bureau staffers.

A review by reporters for the Wisconsin Center for Investigative Journalism of the 60 pages of drafting notes associated with sweeping changes to the state’s open-records law offered no clues about who initiated the proposals. The initials and partial names that traditionally appear on the records match Legislative Reference Bureau or Legislative Fiscal Bureau staff members who help lawmakers draft bills, the Center found.

The proposals – which would have allowed lawmakers and state and local officials to withhold documents and information revealing the inner workings of government – were removed from the budget Tuesday by the Senate. The Assembly is expected to do the same.

Legislative Reference Bureau records indicate the changes were drafted in the week before the Legislature’s Joint Finance Committee introduced and passed them Thursday on a party-line 12-4 vote without public debate.

Bowing to criticism from across the state and a broad swath of the political spectrum, Gov. Scott Walker and GOP legislative leaders on Saturday vowed to remove the items from the two-year state spending plan. They were included in Motion 999, an often controversial grab-bag budget amendment whose authors traditionally remain secret.

On Tuesday, Senate Majority Leader Scott Fitzgerald, R-Juneau, acknowledged to The Capital Times that he and other top GOP leaders, along with Walker’s staff, were involved in crafting the open-records changes.

After days of dodging questions about whether the Republican governor was involved in the proposals, his spokeswoman Laurel Patrick on Tuesday acknowledged Walker’s staff participated in drafting the amendment.

A Wisconsin Center for Investigative Journalism story had pointed out that the language in the amendment closely followed recent open records request denials issued by the governor’s office and his Department of Administration.

Fitzgerald told The Capital Times Tuesday that the proposals “came from a number of different sources,” because of “some issues, I think, related to the Legislature and the executive branch dealing with open records requests.”

Patrick said it was top GOP lawmakers who initiated the changes. Emails left with the offices of Fitzgerald and Assembly Speaker Robin Vos, R-Rochester, were not immediately returned.

“Legislative leaders let us know that they were interested in making changes to the open records law. In response, our staff provided input regarding these proposed changes,” Patrick said in an email.

She said the goal was to allow “robust debate” among policy makers while ensuring that materials related to final proposals would remain “fully transparent.”

“Our focus remains on ensuring open and accountable government,” Patrick said, “and we encourage public debate and discussion of any potential future changes to the state’s open records law.”