Here and elsewhere, conservative commentators have embraced the narrative put forth by critics of the two John Doe probes involving Walker and others. Wisconsin is being defamed as a place where unethical law enforcers driven by naked political partisanship have run amok.

At the core of this conflagration is an incendiary article in the National Review on John Doe-related searches. Exhibit A: the search of former Walker aide Cindy Archer’s Madison home in September 2011. Archer said police arrived with a battering ram and that a “furious” FBI agent yelled in her face and threatened to put her in handcuffs. She was purportedly forbidden from calling a lawyer and ordered to keep mum about the search.

“They had a keener sense of due process in Salem, Massachusetts,” mused National Review editor Rich Lowry in a commentary inspired by this report.

Leonard Peace, a spokesman for the FBI in Milwaukee, declined to comment on “operational questions associated with investigations.” But Dane County Sheriff Dave Mahoney, whose office took part in this search, calls the National Review account “highly suspicious,” saying he cannot fathom why “there would be a warning that you could not call an attorney or tell others of the warrant.” John Doe secrecy rules apply to court proceedings, not searches.

The National Review piece shrugs off the criminal convictions of six Walker aides and associates stemming from the first John Doe, saying it “failed in its ultimate aims” because “Walker was untouched, his reforms were implemented, and he survived the recall election.”

Wisconsin Club for Growth director Eric O’Keefe, who has elsewhere likened the searches to rape, poured gasoline on the fire in an appearance on Fox News. He said the now-stalled investigation of alleged election law violations by his group and others is based on a theory “completely unsupportable under Wisconsin law,” launched because “the left was tired of losing election after election after election.”

But released records show Walker and others engaged in campaign coordination of the sort that’s been punished in the past. And even one of the judges who sided with the John Doe targets called the prosecution’s position, which he disagreed with, an “arguable interpretation of the statutes.” 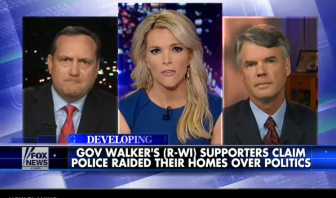 Joining O’Keefe on Fox was “whistleblower” Michael Lutz, an ex-cop who worked briefly in Milwaukee County District Attorney’s Office. Lutz claimed DA John Chisholm, a Democrat who initiated the probes, professed his desire to “stop Gov. Walker and all Republicans” from achieving their political aims and turned his office into a weapon to “prosecute and persecute all those who had a different political ideology than him.”

Lutz described Chisholm as “a good friend of mine.” Neither he nor Fox host Megyn Kelly mentioned that Lutz in 2013 left Chisholm a drunken message threatening to kill him and his family.

Walker has joined the bashing, calling the probes “largely a political witch hunt” and “really about trying to intimidate people.” That drew sharp rebukes from Chisholm and special prosecutor Francis Schmitz, who said Walker’s “offensive” remarks would be proven “patently false” by case records that remain under seal.

Schmitz, like other key John Doe players, is a Republican.

Paul Bucher, a former GOP Waukesha County district attorney and two-time past president of the Wisconsin District Attorneys Association, calls the idea that the John Doe prosecutors are politically motivated “absolute nonsense.” Everything that happens is subject to judicial approval, he says. Prosecutors are bound by the law and by codes of ethics.

Bill Lueders is the Money and Politics Project director at the Wisconsin Center for Investigative Journalism (www.wisconsinwatch.org). The Center produces the project in partnership with MapLight. The Center collaborates with Wisconsin Public Radio, Wisconsin Public Television, other news media and the UW-Madison School of Journalism and Mass Commun

One thought on “Have John Doe probes trashed rule of law in Wisconsin?”