The Center was honored with four gold awards, one silver and two bronze in the club’s Awards for Excellence in Wisconsin Journalism, the state’s premiere all-media journalism competition. 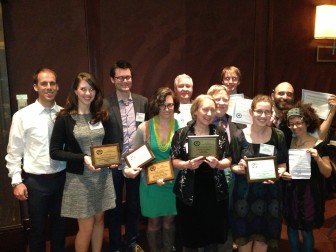 One of the new awards, a gold for best use of multimedia, was for a collaboration with The Capital Times examining threats to Madison area lakes, and efforts that seek to improve them.

The Center took both silver and bronze for best investigative story or series, for Bill Lueders’ investigations of state prison inmate abuse allegations and solitary confinement and Sean Kirkby’s coverage of use of college students as confidential informants in drug cases.

The Center’s website was also honored, winning gold for best website design. The site was redesigned with the help of the Institute for Nonprofit News (formerly the Investigative News Network) last June and built using Largo, INN’s open-source WordPress framework.

Andy Hall, the Center’s executive director, said that the Center’s award-winning work probed a wide range of important state issues — state prison inmate abuse allegations and solitary confinement, water contamination in dairy country, the environmental and economic impacts of frac sand mining, the use of college students as confidential informants in drug cases, and controversial experiments on monkeys at UW-Madison.

“The Center, in collaboration with UW-Madison students and news organizations, is shining a light into some of Wisconsin’s most profound problems,” Hall said.