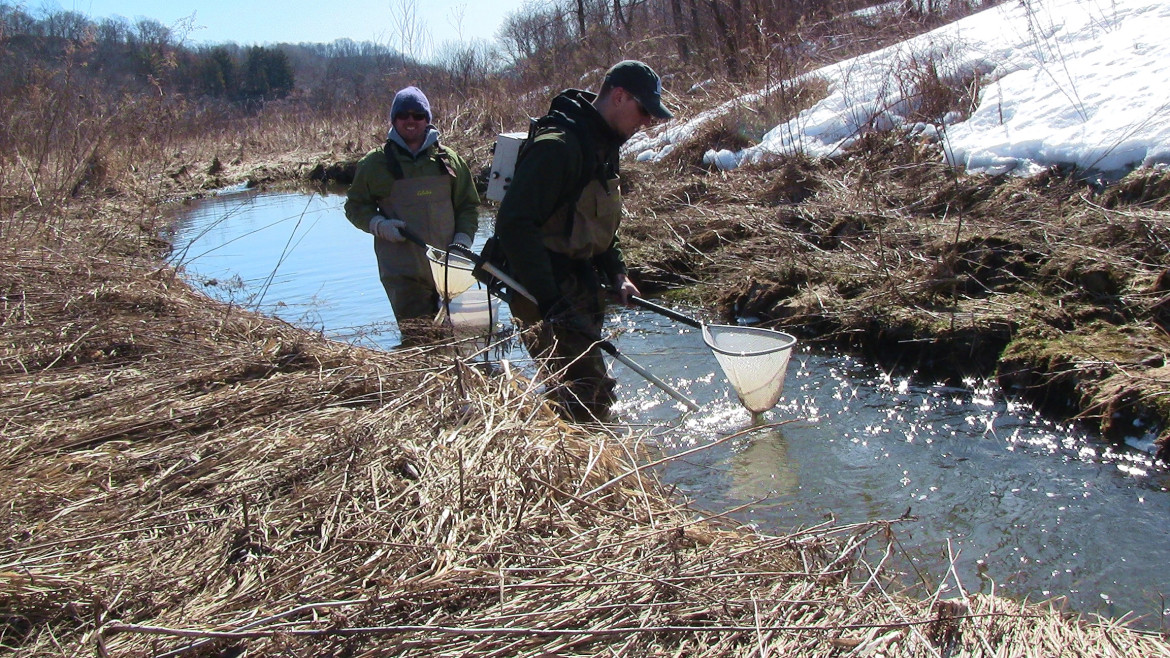 The Wisconsin Department of Natural Resources surveys the state's waterways to track everything from fish populations to mussels, as well as overall water quality. Here, DNR technicians Justin Haglund, right, and Aaron Nolan collect live brook trout from Ash Creek in April 2013 in a long-term study on the spread of gill lice.

Administrators with the state Department of Natural Resources are considering eliminating the agency’s Bureau of Science Services, a move that would go far beyond cuts to science staff proposed in Gov. Scott Walker’s budget.

Internal correspondence obtained by the Wisconsin Center for Investigative Journalism confirms discussions about the possible dismantling of the bureau and a reorganization that would move researchers into other agency divisions.

Critics, both inside and outside the agency, say such a reorganization would rob the state of impartial science that should guide critical natural resource management decisions. Instead, they say, management would more likely be driven by policy decisions and politics.

“Science is the bedrock of natural resource management in this state,” said George Meyer, executive director of the Wisconsin Wildlife Federation and a former DNR secretary. “Without it, there will be mistakes made in management of our resources.”

Meyer also said the change would undermine the agency’s credibility with policy makers and conservation organizations such as the Wildlife Federation and Trout Unlimited, which rely on the agency’s research.

Two emails about the internal discussions were confirmed by the DNR via an open records request.

In a Feb. 25 email, Scott Hull, a section chief in the Bureau of Science Services, asked Mark Aquino, director of the agency’s Office of Business Support and Science, for clarification on remarks made by Secretary Cathy Stepp on a radio show about possible budget cuts and personnel changes for the bureau.

In his Feb. 26 response, Aquino informed Hull that the agency “will go through some form of organizational change that will result in not having a Bureau of Science Services, in an effort to address the legislative perception of research not being well aligned with program needs.”

Hull, in an interview, acknowledged the correspondence and said the reorganization is still under discussion.

Bill Cosh, a DNR spokesman, refused to elaborate on any possible organizational change.

“It is premature for us to discuss what internal plans we are making in response to the budget,” Cosh said. “Out of sensitivity for staff who may be affected by any structural changes, we owe it first to them before we reach out to externals through media.”

The Bureau of Science Services, according to the agency’s own literature, “consists of researchers, analysts and other critical thinkers who provide the expertise and foundation of all science-based decision-making of the Department of Natural Resources. The methods the DNR uses to manage wildlife and handle other environmental issues are built upon the research completed by this bureau.” 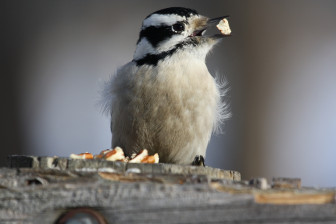 Researchers in the bureau conduct studies on everything from deer populations and deer health to the spread of invasive species and the threats to endangered species. They have published hundreds of papers that, among many other things, evaluate the removal of phosphorus from Wisconsin lakes, the impact of lakeshore development, how timber cutting might affect breeding birds. They do fish surveys in the spring to help determine the health of the state’s fisheries. They monitor air pollution levels and study the potential impact of practices such as frac sand and iron mining.

The bureau has 59 budgeted positions; nine of those spots are now vacant. The governor’s proposed budget would eliminate 18.4 bureau positions.

Stepp has defended the cuts as necessary to streamline the agency. The budget proposed cutting a total of 66 positions agencywide. She has talked publicly about moving some science staffers out of the Bureau of Science Services and into other divisions.

In an earlier response to questions about the bureau and budget cuts, Cosh said, “science has and always will be part of our agency’s decision making process.” He said a majority of the agency’s 2,600 full-time employees have advanced science degrees.

“The budget does not eliminate our ability to conduct applied research and technical consultation that directly supports our management programs,” Cosh wrote. “When it comes to making decisions the agency remains committed to doing so by using sound science, following the law and using common sense.”

The agency’s Bureau of Science Services has recently drawn criticism from state Sen. Tom Tiffany, R-Hazelhurst. Tiffany criticized a bureau report on environmental concerns surrounding the now-defunct plan from Gogebic Taconite to build an open-pit iron mine in northwestern Wisconsin. He said the report was biased against the mine.

Tiffany also told the Milwaukee Journal Sentinel that he was not supportive of the bureau doing research related to climate change because the science behind global warming is still “theoretical.”

Tiffany did not return a call from WCIJ for comment.

The potential elimination of the Bureau of Science Services drew harsh criticism from several in the conservation community, including former and current DNR employees.

A manager in the agency, who also confirmed that administrators are discussing dissolving the bureau, said the move would be a blow to the agency’s reputation and natural resource management in Wisconsin. The manager, who asked not to be named because he said he fears possible reprisals by supervisors, expressed concern that the reorganization would destroy the independence and credibility of scientific research within the agency. 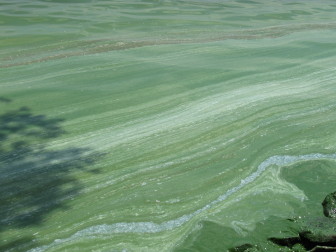 Researchers in the Bureau of Science Services have done numerous studies on phosphorus, a nutrient that can lead to toxic blue-green algae blooms like this one along the Lake Winnebago shoreline near Oshkosh in June 2014.

Dave Clausen, former chairman and member of the state Natural Resources Board, which sets policy for the agency, said moving researchers out of an independent bureau and into other divisions will destroy objective science in the agency. He said researchers housed in divisions such as forestry rather than in an independent bureau would more likely be told to do research that only supports the division’s goals, even though those goals may be driven by a political agenda. In other words, he added, policy would drive science instead of the other way around.

“It’s a bad idea,” Clausen said. “There is no doubt that if you are part of another bureau, you are not going to be able to do independent research.”

Clausen added that the lack of independent science could come back to haunt the agency if its management decisions are challenged in court.

“When you start making decisions on hunter or user whimsy, you lose your ability to defend yourself,” Clausen said.

Timothy Van Deelen, a University of Wisconsin-Madison wildlife ecologist who has collaborated with the DNR, said he worries about the fate of some of the basic science that has been conducted by agency researchers in the past, such as monitoring and data collection. He said researchers outside of the agency rely heavily on long-term databases maintained by the DNR for decades on everything from wildlife populations to rare plant inventories. 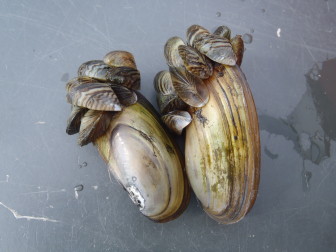 Some species get little attention even though they may be important indicators of the health of Wisconsin\’s environment. The Bureau of Science Services studies invasive mussels, such as the zebra mussels that are shown here slowly smothering a larger native species.

“Long-term data sets are so incredibly rare,” Van Deelen said. “And now a lot of that monitoring, such as with the deer herd, is up in the air.”

Van Deelen also took issue with a possibility raised by supporters of the Governor’s cuts — that UW-Madison research could replace some of the science that in the past has been conducted by the DNR. He said university research would be more expensive and often involves more basic research than the specific studies on state wildlife or plant populations that has traditionally been conducted by the DNR.

Prior budget cuts have already whittled away at data collection. The DNR, for example, by its own admission, is more than 20 years behind on a state wetlands inventory.

“The program is underfunded and understaffed,” the DNR reports on its wetland inventory page. “As a result, there is no reliable qualitative and quantitative data about current rates of wetland loss.” 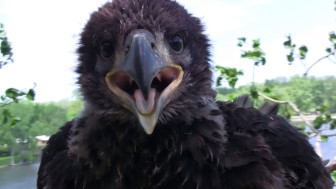 An eagle nestling greets climber and researcher Matt Stuber in its nest nearly 60 feet up a tree in May 2013. Keeping track of endangered or threatened species, and compiling population databases, are part of what Wisconsin’s Bureau of Science Services does.

A betrayal of trust?

Aquino, in his email to Hull, indicated that any final decisions on the fate of the Bureau of Science Services will await the outcome of the budget debate. He said other reorganization options are being considered, with the goal of “maintaining as much ability to conduct in-house research and consultation as possible into the future.”

But Hull, in his email to Aquino, said science staffers fear “that the outcome of our program has already been decided internally and in fact there IS certainty about what will happen to the science program.”

Kimberlee Wright, executive director of Midwest Environmental Advocates, a Madison-based public interest law firm that has frequently challenged DNR actions in court, is also concerned. She said elimination of the bureau would betray a public that cares deeply about Wisconsin’s natural heritage and has relied on the DNR to protect it.

“Our DNR was once one of the best science agencies in the nation,” Wright said. “It was the trustee for my grandchildren and their grandchildren. But we’ve lost that and that really disturbs me.”