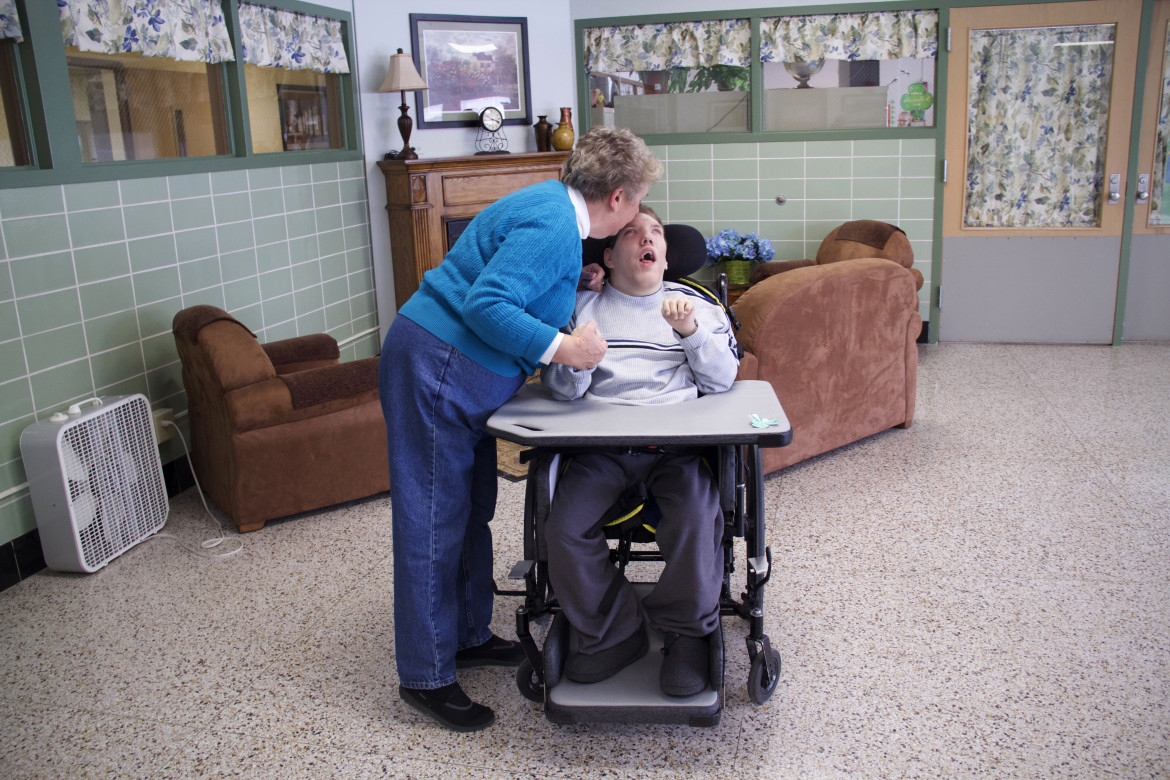 Rebecca Underwood’s son Aaron has lived at Central Wisconsin Center, one of the state’s centers for the developmentally disabled, for more than 30 years. She says the care the center provides its patients and their families “turns their lives around.” Photo Feb. 25, 2015, in Madison.

Aaron Underwood’s seizures finally came under control when, at age 3, he was admitted to a state care facility for the developmentally disabled. His mother soon realized the treatment he received there was better than what she and her husband could provide.

“I’m surprised he didn’t die from what I did because I made some stupid mistakes,” said Rebecca Underwood, who lives near the city of Hartford, about 30 miles northwest of Milwaukee.

Aaron, 35, still lives at Central Wisconsin Center in Madison. He is unable to sit up without support. Lacking purposeful movement, he functions at the level of a four- to 12-week-old infant, unable to speak.

The care the facility provides its residents and their families, his mother said, “turns their lives around.”

But fewer Wisconsin residents are receiving institutional care. In 1970, the state’s three centers housed 3,700 people. At the end of last year, their total population was 389.

Only two still provide long-term care – with patients living at the facility for at least six months, and often for years. Neither has admitted new patients in more than 15 years.

The decline is part of a national movement to take people out of institutions and integrate them into the community. But Underwood, who with her husband runs a coalition of family members and advocates for people with intellectual disabilities, worries the trend may have gone too far. In one recent case, a family has gone to court to compel the state to provide long-term institutional care.

On the other hand, some disability rights advocates would like the state to end long-term institutionalization altogether.

“There’s really no reason for people with developmental disabilities to need that level of institutional care,” said Mitch Hagopian, an attorney for Disability Rights Wisconsin, a state advocacy group that is part of a federally mandated network of protection agencies.

“There are sufficient community resources available to provide adequate care for people and in a setting that’s more natural and integrated into the community.”

From long-term to short-term care

“They work around the clock and they do an excellent job,” said Dr. Ted Bunck, the former Bureau of Center Operations director at the Wisconsin Department of Health Services. Bunck, who oversaw operations at the state centers until his retirement in January, said the teams individualize care for their residents.

The state’s Medicaid program pays about $3,000 monthly — roughly $100 per day — for a person receiving a nursing home level of care as part of Family Care, one of several long-term programs offered by the state.

For the three state centers, the costs are much higher, ranging from $821 a day at CWC to $1,385 a day at Northern Wisconsin Center. The majority of costs at the state centers are borne by Medicaid, using state and federal dollars.

Family Care cost a total of $1.3 billion for the fiscal year that ended June 30. The total funding for centers during that time was $128.3 million.

Gov. Scott Walker’s biennial budget modifies Family Care, to expand the program statewide and change the way it operates. Advocates for people with disabilities worry the changes could jeopardize the safety of vulnerable participants in the program.

The budget keeps funding about the same for the centers.

CWC last admitted a new patient for long-term care in 1997. Since then, the number of people receiving that level of treatment has decreased from 440 in June of that year to 217 at the end of 2014. Southern Wisconsin Center has seen a similar decline. 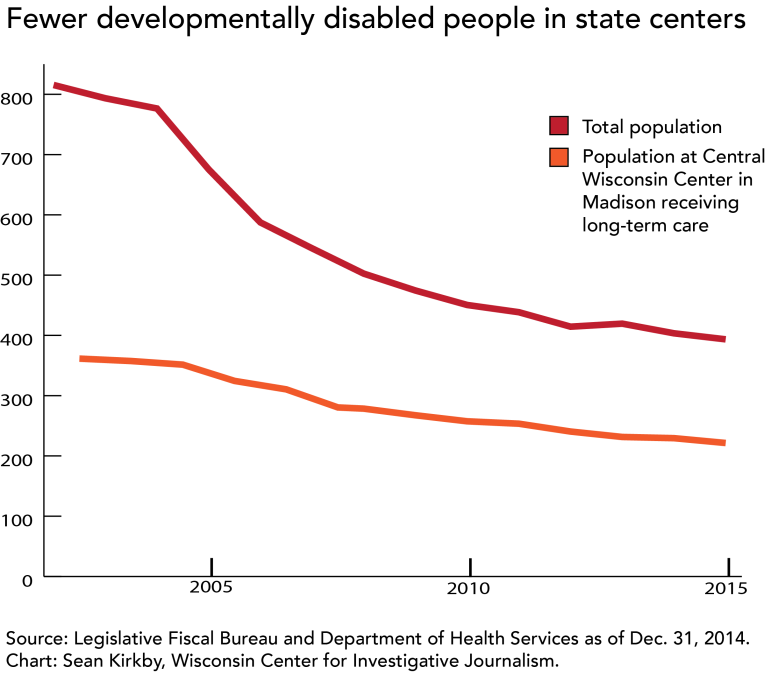 Northern Wisconsin Center ended its long-term care program in the mid-2000s, but still provides treatment that lasts from one to three months. Similar programs are offered at the other two state facilities.

About 200 people a year receive short-term medical care or intensive treatment programs at the state’s centers, before returning to live in the community. Bunck said community settings, which include a wide range of services, are “now the best and most common way for people with intellectual disabilities to receive long-term care.”

That care can be delivered in people’s homes, small and large residential care facilities or group homes and in nursing facilities.

But last year, at least one family went to court to ask that its child be protectively placed into long-term care at CWC. The family has petitioned Dane County juvenile court, according to the family’s attorney, and the child remains in short-term care while the case is pending.

Underwood’s husband, Kevin, described the case in a letter sent in January to DHS Secretary Kitty Rhoades. He said the state was ignoring the recommendation of the physician, who felt CWC offered the best therapeutic setting to meet the child’s complex medical needs.

The family declined comment and requested anonymity, because the case is still in court. But it did convey through an intermediary that “our child has benefited in countless ways” from being at CWC, including weight gain, physical and functional advances, and a significant reduction in chronic pain formerly treated with narcotics.

“Our child’s situation at CWC is, simply put, finally humane,” a family member said in an email through the intermediary. CWC “starts by addressing the medical needs — for patients who require a facility level of care, comprehensive synchronized medical care from a multi-disciplinary staff.” Absent such care, “there is suffering.”

Other families, Underwood wrote, have given up trying to get their children into the facilities “due to their inability to engage in an expensive court battle with the state.” He argues that Wisconsin’s freeze on long-term care violates a federal rule requiring a choice between institutionalized care and home and community-based services.

“Having the right to choose is meaningless and lacks value,” Underwood wrote in a letter to the state last August. “Individuals in Wisconsin are being denied that choice even though facilities exist.”

But Brian Shoup, administrator of long-term care for DHS, wrote back that federal law does not require that institutional services be offered on an indefinite or extended basis.

“Rather, it requires the state Medicaid agency to provide choice between home and community-based services and institutional services,” Shoup wrote. He added that only a court can order placement in a state center, and then only if it is the most integrated and least restrictive setting appropriate to the person’s needs.

Rebecca Underwood insists that CWC qualifies under the least-restrictive standard, given her son’s intellectual disabilities and complex medical needs.

During a reporter’s visit in December, Aaron would not stop groaning. His mother massaged his back, rocked his wheelchair back and forth, and pushed it through the underground hallways that connect the buildings at CWC. This quieted him for a few moments, before he began groaning again. 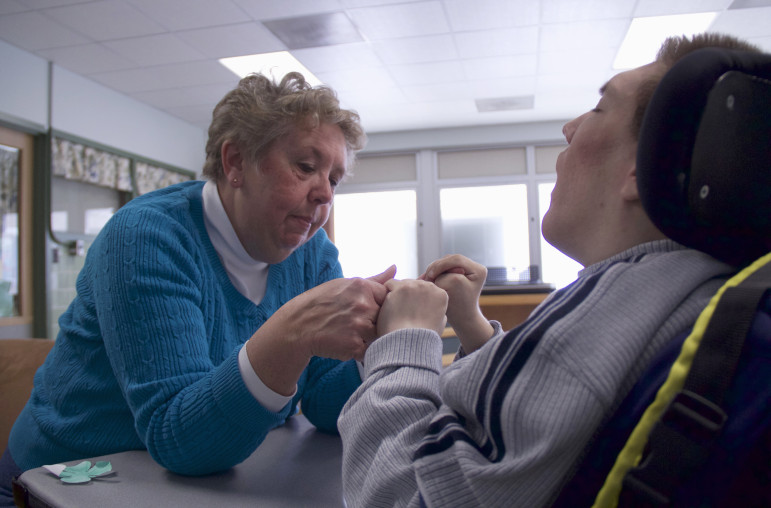 Rebecca Underwood worries those like Aaron may not receive adequate support and care in the community. Photo: Feb. 25, 2015, Madison.

“Existing and having a quality of life are two different things,” Underwood said. “When you have profound developmental disabilities coupled with medical fragility, that’s 365-day, 24/7 care they need.”

Natalie McClellan, whose son has lived at CWC for about 20 years, also does not see community placement as an option. Her son A.J., 30, was born with spina bifida, a birth defect that paralyzed him from the waist down. Because of another physical disability, he is fed through a tube. And a case of meningitis at the age of 5 left him with an intellectual disability that has complicated his physical disabilities.

“The bottom line for A.J. is his quality of life is completely dependent on how healthy he is,” McClellan said. She said her son has been healthier at CWC because of the quality, the consistency and coordination of care it provides, which is unavailable outside of the facility.

Underwood said that while CWC is not perfect, the facility has received awards for high standards and been used by the federal government to train inspectors.

In contrast, a state investigative report from 2007 documents a case in which an individual who was transferred out of CWC to a facility in New London was twice sent to an emergency room after a feeding tube came out. The person’s guardian was never told of these developments, violating a state rule, until the situation led to a two-week hospital stay.

There have also been problems in other states, including Texas, Virginia, Connecticut, New York and Louisiana.

When Northern Wisconsin Center ended long-term care in 2006, Hagopian notes, the guardians of many residents believed it would be “impossible to provide safe and adequate health care” outside of the institution. In his view, “it wasn’t true then and it isn’t true now.”

In Georgia, at least 30 deinstitutionalized people died unexpectedly over a four-year period, a 2014 Atlanta Journal-Constitution investigation found. Individuals in community settings were punched, whipped with a belt, or denied medication and medical care. In one case, a prolonged failure to have a bowel movement caused a man to vomit blood, and die.

But attorney Hagopian of Disability Rights Wisconsin said people with serious developmental and physical disabilities have been successfully placed in Wisconsin communities for decades.

When Northern Wisconsin Center ended long-term care in 2006, he notes, the guardians of many residents believed it would be “impossible to provide safe and adequate health care” outside of the institution. In his view, “it wasn’t true then and it isn’t true now.”

When Northern Wisconsin Center ended long-term care in 2006, Hagopian notes, the guardians of many residents believed it would be “impossible to provide safe and adequate health care” outside of the institution. In his view, “it wasn’t true then and it isn’t true now.”

A survey found that guardians of Northern residents relocated to community living were generally satisfied. Seventy-eight percent felt their wards had opportunities to interact with the community. However, only about half said they were welcomed into it.

As the number of people receiving long-term care at the state’s centers continues to decline, some worry the centers may be shut down altogether. Marsha Hall, who worked at the center from 1975 to 1988 and was the guardian of a CWC resident who died in November, shares this concern.

There “has to be a critical mass of residents” for the facility to function, Hall said. She believes those who are relocated or die should be replaced by people who could benefit from this setting, to keep it viable. She stresses that those who remain at the centers are “medically fragile and complicated folks who really can’t be managed properly in a community setting.”

Bunck said there are no plans to close the centers. Short-term programs will continue to operate and “be an important part of the whole Wisconsin system.”

But as the trend toward deinstitutionalization continues, Underwood warns that more families are being shut out of the decisions that affect the quality of their loved ones lives.

“The decision as to what is the best setting is best left up to families and the individuals’ treating professionals,” she said. “Not DHS personnel sitting in offices far removed from the situation. Not politicians, nor anyone lacking personal knowledge of each particular situation and need.”