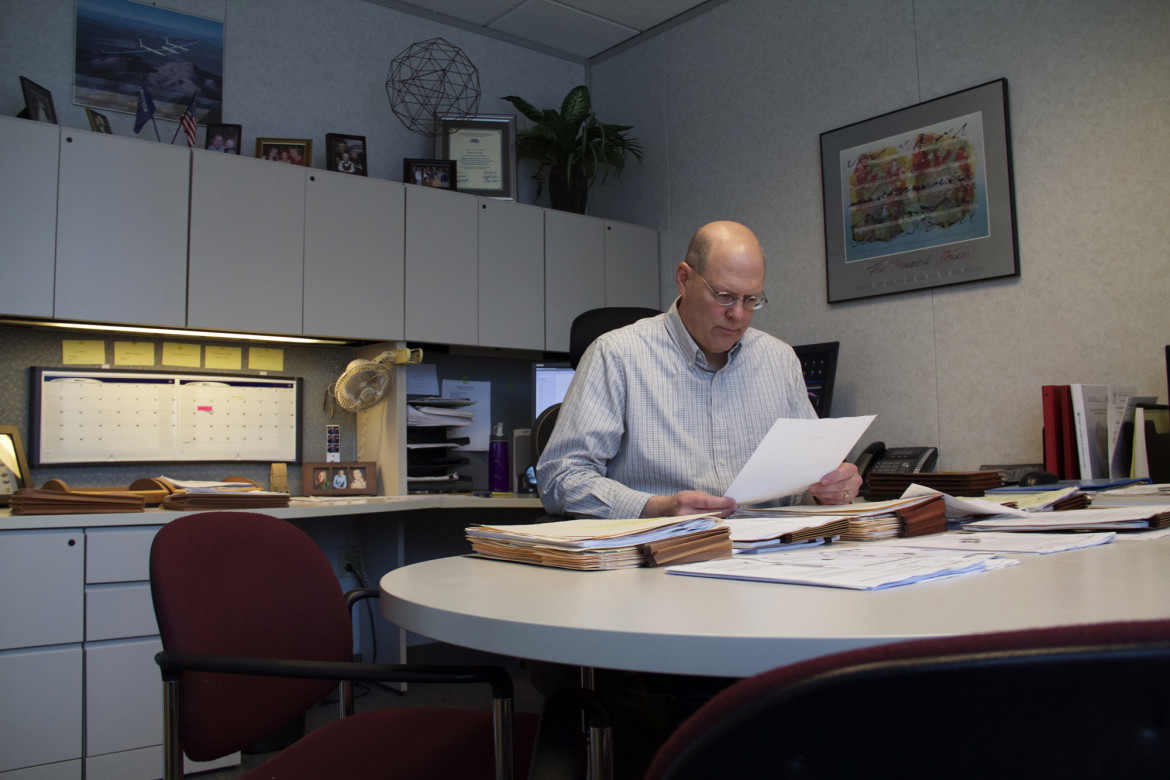 David Dies, executive secretary of the Wisconsin Educational Approval Board, at his office March 25, 2015.

David Dies fears that if Gov. Scott Walker succeeds in eliminating the Wisconsin Educational Approval Board, the for-profit schools it oversees will ramp up practices that could harm students.

“If you basically throw the rule book out, I can guarantee you that they will take advantage of their ability to market and recruit as aggressively as possible,” said Dies, the board’s executive secretary.

The proposal to eliminate the EAB is part of Walker’s proposed 2015-17 budget. Since its unveiling in February, Dies has been trying to persuade state lawmakers to reject the idea.

Dies said his small agency is already “outmatched” by the private, for-profit colleges it oversees. Behemoths like the University of Phoenix and Globe University are a far cry from the mom-and-pop schools that dominated the sector 20 years ago.

Walker believes dumping the EAB will “benefit schools by eliminating a costly and unnecessary regulatory burden,” according to his spokeswoman, Laurel Patrick.

But Dies said his agency does not in fact cost the state money — its operations are funded by fees to the schools — and that the “vast majority” of schools do not support the agency’s demise.

“Almost every institution is confused as to why we would want to do this,” Dies said. “The EAB oversight really provides some legitimacy and integrity for the sector.”

In a position paper detailing his views, Dies wrote that Walker’s budget proposal would leave Wisconsin as “the only state in the nation without any meaningful oversight for private postsecondary education institutions.”

Wisconsin Sen. Stephen Nass, R-Whitewater, who serves on the Senate education committee, is still mulling whether or not to support the proposal, said his spokesman Mike Mikalsen.

“We think the EAB does some very important stuff, but we have some concerns about how the EAB carries out its business,” Mikalsen said. He cited a 2012 proposal to require schools to graduate at least 60 percent of their students as an example of the board being too “aggressive.”

Dies said the proposal, which matched national accreditors’ standards, was intended “as a starting point to having a conversation,” but died in the face of resistance from legislators and schools.

The waiting area for the Wisconsin Educational Approval Board, which oversees the operations of giant for-profit colleges, is a converted cubicle. Photo March 25, 2015.

The Wisconsin Educational Approval Board oversees 252 for-profit and certain nonprofit postsecondary schools, enrolling about 60,000 students. Outside its jurisdiction are the UW System and technical, religious and recreational schools.

For-profit schools that seek approval from the EAB must pay fees, submit detailed information about their finances, enrollment and programs, and have a student complaint process.

Walker’s proposal would eliminate the seven-member board and its six full-time and one part-time staff positions, as well as its $605,000 annual budget.

Its remaining responsibilities would be divided between the state Department of Agriculture, Trade and Consumer Protection and the Department of Financial Institutions and Professional Services, newly created in the budget.

“This proposal is part of the governor’s overall goal to streamline state government to make it more efficient, more effective, and more accountable,” Patrick said.

A 2010 report by the U.S. Government Accountability Office found that recruiters lied to its undercover agents at all 15 campuses it investigated. Colleges were hit by lawsuits and U.S. Senate hearings, CEOs were called onto the carpet by their accreditors, and the U.S. Department of Education came out with a package of federal standards designed to prevent problems.

States have faced criticism from national and local education experts for failing to thoroughly review schools operating within their borders.

“Lax state oversight must end,” said the nonprofit National Consumer Law Center in a 2014 report, which recommended states avoid relying on “accreditation as a substitute for oversight.”

Dies said he has long asked for more resources. The agency lacks in-house counsel despite a near-constant need for legal advice, and the staff is hard pressed in dealing with giant for-profits.

“When you come into a meeting, they have three to four attorneys across the table,” Dies said. “That’s where it gets difficult, because they look at us and say, ‘Who are these guys telling us how to improve our business model?’ ”

The increase in online schools poses a problem, as some have failed to seek state licensure before enrolling Wisconsin students. The EAB can “barely get to the schools and approve the schools that we’re responsible for now,” even with the addition of a full-time and part-time staffer in 2012, Dies said.

But he maintains the agency has still been able to help students. When Anthem College closed its Brookfield campus in August 2014 — displacing 150 students— the EAB helped move equipment and some students to nearby Milwaukee Career College in Wauwatosa.

Will students be more vulnerable?

Oversight of higher education in the United States is often described as a “triad” of the federal government, states, and regional or national accreditors. States are charged with authorizing schools and responding to student complaints.

“We want to make sure, whatever that process is, that states have some process to vet these institutions — that they’re good enough for serving residents of the state,” Dies said.

State statutes require the EAB to track school data, visit campuses and review curriculums, among other responsibilities. According to the budget proposal, DATCP would handle student complaints, while DFIPS would authorize schools to operate in the state.

Only schools with students taking federal financial aid would need authorization from DFIPS. Smaller institutions with no students receiving federal aid would not need approval to operate in the state.

The budget proposal says all the EAB’s “necessary functions” will be transferred, but Patrick did not respond to a question about how those were defined.

Dies is concerned that some oversight requirements — curriculum and program reviews, refund policy requirements, and disclosure of costs and policies — may simply end.

Stephanie Cellini, an economics professor at George Washington University, said Wisconsin led the nation at tracking data on what happens to students. She worries the data would deteriorate if the EAB were eliminated.

“It seems like EAB was doing the right thing,” she said. “Wouldn’t it make sense to add staff to EAB?”

The operators of two small schools said they hoped the EAB would stick around.

Laura Ehmann, the CEO of Midwest Maternal Child Institute, which has had a total of 17 enrolled students in Milwaukee since 2012, said she still plans to say her school is EAB-approved should the proposal pass, to distinguish her school from “fly-by-night” midwifery schools that lack approval.

“Having the state’s approval is a big deal for schools,” Ehmann said. “The rigorous process we have to go through to get approved is absolutely what we wanted.”

He saw competitors behaving badly in the past — taking federal money despite high default rates, failing to do credit checks, and “milking the soup lines in Chicago” for students with the lure of cash.

“The industry needs regulation,” said Klabacka, whose family has run the school for 50 years.

Another small school under the EAB’s jurisdiction is the Wisconsin School of Professional Pet Grooming, in Oconomowoc, with two instructors and 20 enrolled students since 2012. Recently, four students lodged complaints against the school’s director, Delores Lillge, alleging “harsh, demeaning criticism and personal attacks,” hitting a misbehaving dog on the head with a metal comb, and calling a student with disabilities “a dummy.”

EAB staffer Pat Sweeney wrote Lillge a scolding letter describing the students’ concerns and directing the school to address them. And he helped the students negotiate a partial refund and certificates of completion, to which three out of the four agreed.

Lillge said she agreed to “small” improvements but denies the students’ allegations and said a confidentiality agreement prevented her from discussing the matter.

The EAB is designed to prevent complaints like those to the pet grooming school, Dies said. If it is eliminated, he predicted, “complaints are going to increase significantly.”