The numbers are in, let the crunching begin.

State political candidates and lobby groups recently filed disclosure reports with the Wisconsin Government Accountability Board. Here are some highlights:

Wisconsin’s 700-plus registered lobby groups reported spending $11.5 million seeking to influence state law and policy in the last half of 2014. That brought total lobbying expenditures for the two-year legislative session to $57.5 million. 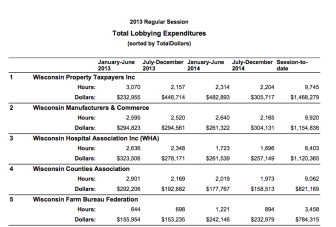 This report shows the top Wisconsin lobby groups in terms of spending in the 2013-14 legislative session.

One erratic variable has been the role of public employee unions. In 2009-10, four of these unions — the Wisconsin Education Association Council, AFSCME Council 11, AFSCME International and Wisconsin State AFL-CIO — collectively spent $3.4 million on lobbying. In 2011-12, when these unions waged a losing battle against Act 10 changes, this total topped $7 million.

The session’s highest spending lobby group, at $1.5 million, was Wisconsin Property Taxpayers Inc. Most of this went to pay field workers who go around the state talking up the membership-based advocacy group’s tax-reform agenda.

Among the session’s most heavily lobbied bills were those to loosen the rules for metallic mining (3,598 hours) and toughen the rules for suing over asbestos exposure (3,256 hours). Both bills drew major opposition as well as support. The supporters won.

And a bill to tweak the state’s rules for worker’s compensation drew 3,333 hours of reported lobbying. The committee charged with this normally routine task, under pressure from GOP lawmakers, included caps on charges by medical providers. The medical establishment saw red, while powerful interest groups including WMC favored the change. The bill did not pass.

On to campaign finance. Newly filed reports show Republican Gov. Scott Walker raised $30.4 million and spent $32.4 million in the last six months of 2013 and all of 2014. That’s nearly twice the roughly $17 million raised and spent during this 18-month period by his unsuccessful Democratic challenger, Mary Burke.

Meanwhile, Republican Brad Schimel raised and spent about $1.4 million on his way to becoming state attorney general. His rival, Democrat Susan Happ, raised and spent about $1 million. Outside groups including WMC poured at least $2.3 million into the race on television ads alone, according to estimates from the national Center for Public Integrity.

Here’s another fun finding: During the past two years, candidates for state Assembly and Senate collectively raised $13.8 million and spent $12.8 million. There were 361 candidate committees in all.

But by the time ballots are cast on April 7, the coffers of these two candidates could be a minor factor. Total spending in the last five Wisconsin Supreme Court elections, as estimated by the nonpartisan watchdog Wisconsin Democracy Campaign, has topped $22 million. Two-thirds of this was by outside special interests.