The Wisconsin Center for Investigative Journalism on Friday sued the Wisconsin Department of Corrections over its lack of response to two records requests regarding the Center’s ongoing investigation into inmate treatment and discipline.

“Defendants have violated the open records law by failing to respond to, and delaying and withholding records responsive to” the two requests, states the complaint, filed in Dane County Circuit Court. “Defendants’ actions have caused and will continue to cause injury to the plaintiffs by depriving them and the public of their rights under the open records law.”

The suit was filed by Christa Westerberg of the law firm McGillivray Westerberg & Bender LLC, on behalf of the Center and reporter Bill Lueders. It names as defendants the DOC and its secretary, Edward Wall. 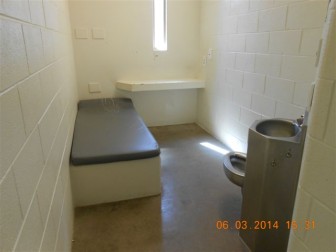 A segregation cell at Waupun Correctional Institution. The Wisconsin Center for Investigative Journalism identified 40 allegations of physical or psychological abuse by correctional officers against inmates in Waupun’s segregation unit since 2011.

WCIJ Executive Director Andy Hall said this action was taken only after other approaches failed. “This is the only open records lawsuit the Center has filed in its six-year history,” Hall said. “We regret that this is necessary to get a state agency to obey the law.”

At issue are two records requests, both seeking information in the aftermath of the Center’s 2014 series on allegations of abuse of inmates by guards at the Waupun Correctional Institution.

One request, filed Sept. 19, asked for records regarding any disciplinary investigation or disciplinary action in 2014 brought against a particular state prison guard, in a case involving an inmate at the Fox Lake Correctional Institution.

DOC spokeswoman Joy Staab acknowledged receipt of the request on the day it was sent. But she did not reply to emailed requests for a status update sent two months later, on Nov. 19, and on Jan. 20, 2015, more than four months after the original request.

A second request, seeking records regarding a work group tapped by Wall to review the DOC’s use of solitary confinement, was filed Nov. 19. This also drew an acknowledgement from Staab on the day it was sent, but no records or status update were provided.

Wisconsin’s open records law requires that public officials respond to requests “as soon as practicable and without delay.” The law does not set a time limit, but the state Attorney General’s office has advised that simple requests should generally receive a response within 10 business days.

The suit asks the court to find that the defendants violated the law and order that the records be provided without further delay, along with attorneys’ fees, as the law allows.

Staab did not immediately return a message Friday seeking comment.

Update: On Feb. 9, 2015, the Center amended its complaint to include references to a records denial from DOC received after the lawsuit was filed. The denial concerned the Center’s Sept. 19 request for records regarding the disciplinary investigation involving a prison guard. The DOC response, dated Oct. 22, 2014, but not provided until Feb. 2, 2015, acknowledged that responsive records existed but said that releasing them would jeopardize prison security.

The amended complaint is posted here.