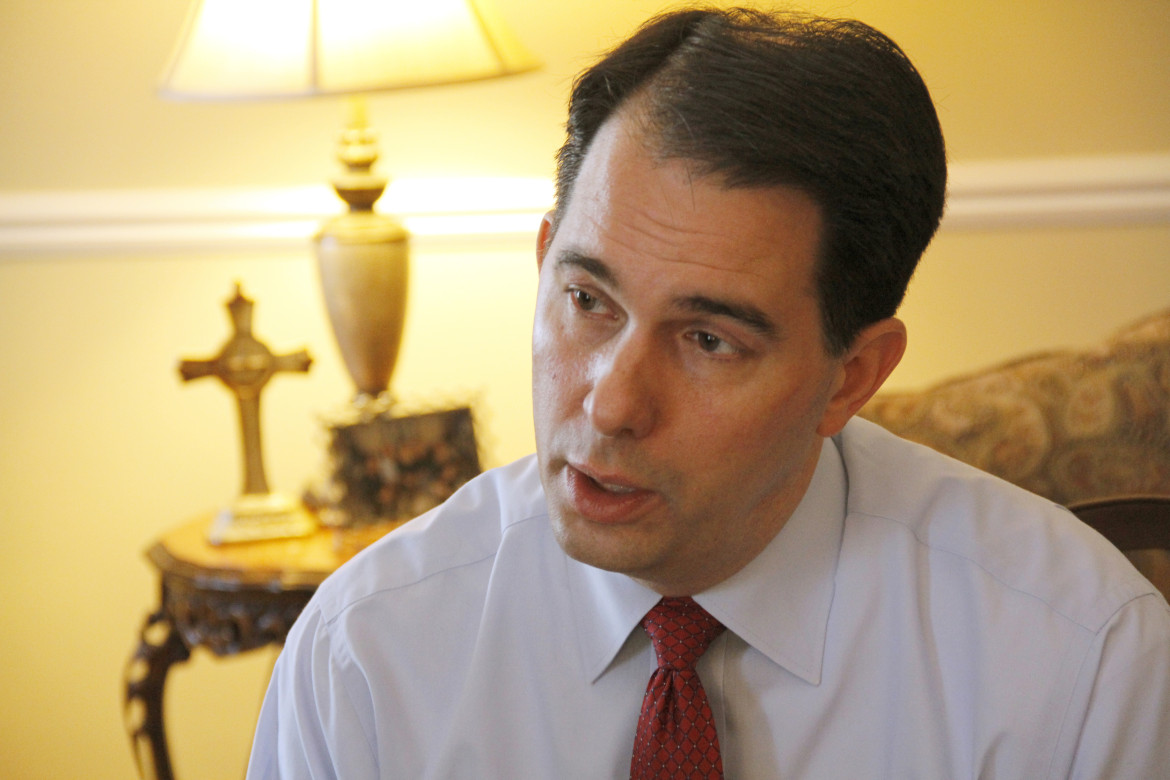 Gov. Scott Walker boldly titled his 2013 book, seen as a sign of his presidential ambitions, “Unintimidated.” Perhaps a better title for his mindset on the cusp of his second term would be “Undecided.”

In a wide-ranging interview Tuesday with the Wisconsin Center for Investigative Journalism, Walker remained noncommittal on a number of issues, from whether he intends to run for president to whether he would block a bill to make Wisconsin a right-to-work state.

Republican legislative leaders have indicated their desire to pass a right-to-work bill, which would prohibit making private-sector employees join unions or pay union dues. Walker, a Republican, has called the issue a “distraction” and told lawmakers it is not among his priorities.

But Walker has not promised to veto the bill, which some observers say signals his intention to let it become law. Walker rejected that interpretation in the interview at his Executive Residence.

“If that’s the case, then there must be 1,000 bills I’m going to sign this session, because there’s no other bill I’ve threatened to veto,” he said. “There’s plenty of other bills that I’m not particularly interested in but you don’t hear me running around threatening a veto of. I usually work with the Legislature, just as I have on this particular bill.”

Walker also said he is still processing whether to seek his party’s nomination for president, reiterating that he would need to feel called to this quest.

“I don’t think people should just run particularly for office as high as that because it’s the next logical step or it’s part of adding to a career, in this case in politics,” Walker said. “I think it’s something you should feel like you’re actually called, that there’s a purpose, there’s a reason for doing it.”

He said his religious faith would be part of this process, as it has been for other important decisions in his life.

Walker also declined to stake out a position on the use of torture by CIA operatives, as outlined in a recent Senate committee report, saying he had not read the report.

And he was noncommittal on a state Republican lawmaker’s proposal to set a mandatory retirement age of 75 for judges, which would force out several members of the Wisconsin Supreme Court, including Chief Justice Shirley Abrahamson. “I haven’t even thought about it,” he said, adding that he is gathering more information.

One issue on which Walker stood firm was his refusal, alone among at least the past six Wisconsin governors, to grant pardons to persons convicted of crimes. He feels strongly that he should not be able to “discount” the workings of the justice system by exercising this power, adding that systems of redress are already in place for those wrongfully convicted.

Besides, he noted, somewhat jokingly, individuals barred from gun possession due to felony convictions can still bow hunt.

Walker said he is supportive of calls by Edward Wall, secretary of the state Department of Corrections, to rethink Wisconsin’s use of solitary confinement. About 1,500 of the state’s 22,000 adult inmates are in solitary, locked in their cells for upwards of 23 hours a day.

“Secretary Wall’s talked to us at length about that,” Walker said. “He’s been looking not only at Wisconsin but at what other states have been doing and how successful it’s been.”

Walker defended his view that it is better to leave control of academic standards to local school districts rather than follow voluntary federal Common Core standards. He said local control, as enhanced by the Act 10 changes wrought by his administration, has proven congruent with academic success.

A check of educational data confirms that the graduation rates and third-grade reading scores have risen since 2010, the year before Walker became governor. And Wisconsin did have the nation’s second-highest composite ACT scores in 2014, although the fluctuation in this score since 2010 has been minor, varying from 22.1 to 22.2.

One thought on “Gov. Scott Walker noncommittal on right-to-work, firm on no pardons”