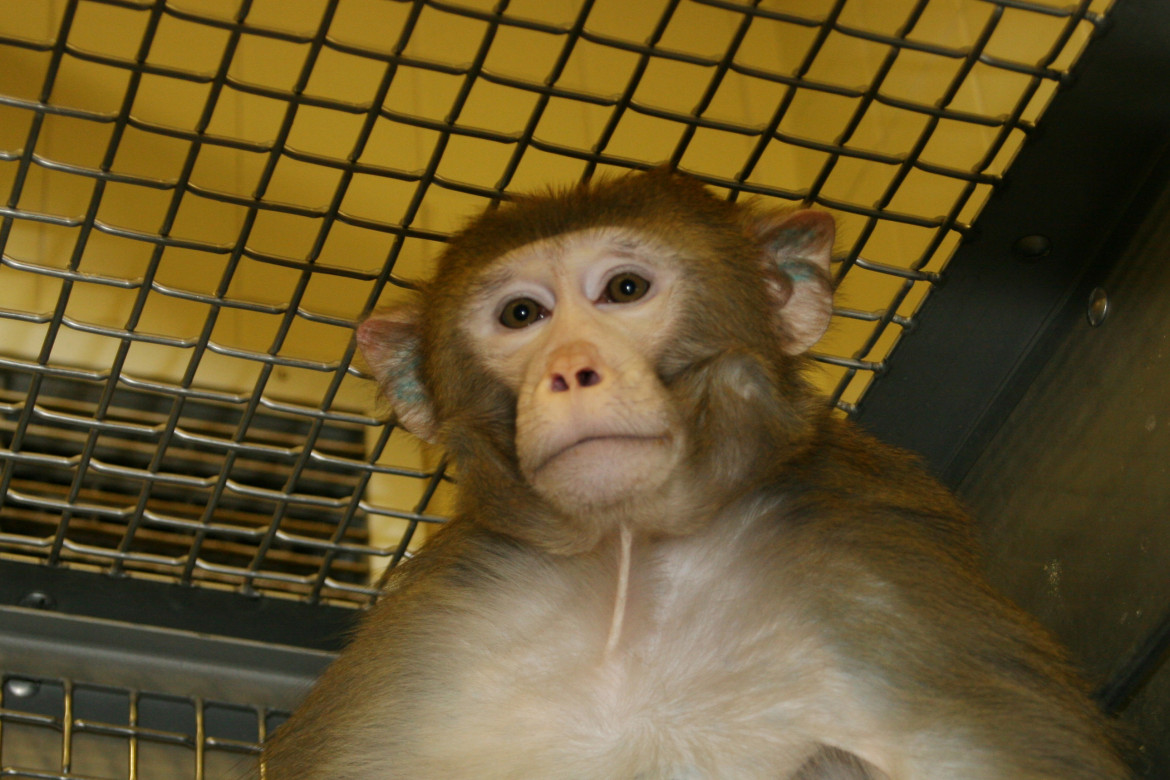 My monkey died as he lived — in seclusion, for the benefit of others.

His name was r04040. He was euthanized on April 28, 2010, two days after his sixth birthday. More than four years would pass before I made the records request that reacquainted me with his reality, and apprised me of his fate.

According to his former keepers, r04040 died serving a greater cause. He may have kept human beings from undergoing treatment that was not only unhelpful but dangerous. The study that led to his death was funded in part by the Michael J. Fox Foundation for Parkinson’s Research.

I was there on the day r04040 was born, at the Wisconsin National Primate Research Center at the University of Wisconsin-Madison. He was a rhesus macaque, like about three-quarters of the 2,000 monkeys housed at the UW. These animals live out their lives in small cages, never once seeing the sky or sun or grass or trees.

The sign on his incubator said: “Born today, rejected by mother, male infant.” He was swaddled in a blue blanket. At first I thought he was dead; then he opened his tiny eyes. I may have been the first person he saw.

At the time, like everyone who gets inside the primate center, I was decked out head to toe in bizarre garb, including a shower cap and plastic face shield. These prophylactics — and the tuberculosis test I had to take — were for the protection of the monkeys, not me.

I was told that monkey mothers sometimes reject their babies, even in the wild, and that r04040 was paired with a surrogate mom. I took his picture, and used it for an article on primate research that appeared in Isthmus on June 4, 2004. 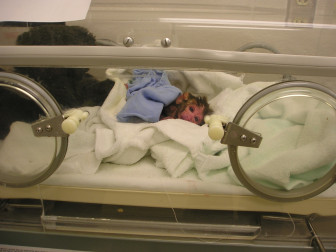 Five years later, in 2009, I wrote another article, focused on this monkey. My monkey. I wanted to explore the life of a single research animal.

The records I obtained showed that r04040 had not been used in any experiments. He was too young. “Very few get used before they’re five years old,” said Saverio “Buddy” Capuano, the primate center’s head veterinarian.

There was still plenty of time. Rhesus macaques in captivity can live up to 40 years.

The records documented what seemed to be a sad existence. R04040 suffered from chronic diarrhea and was repeatedly injured by cagemates.

Here are some entries from his first five years: “Vomit.” “Cuts on left hand.” “Prolapsed rectum with a great deal of blood.” “Bruised and swollen right eye.” “Bite (on) right abdomen.” “Multiple old wounds and new wounds present all over back and legs.”

Capuano and Joe Kemnitz, then the primate center’s director, argued that r04040 had it good, relative to others in his situation. “We’ve had animals who lose fingers and body parts in fights,” Kemnitz told me.

“This animal has not had a difficult life,” Capuano added, saying the traumas he had experienced are “the normal things you’re going to go through growing up.” 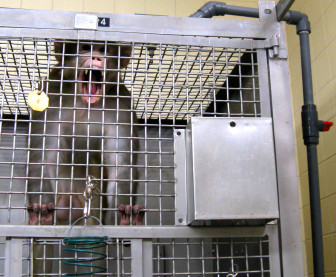 For the story, I returned to the primate center, to see and photograph r04040. He was terrified, his mouth wide open with threat and fright. I felt guilty for putting him through this ordeal, just so I could write about it.

After my second story, I made mental plans to check in again on r04040 after another five years had passed. It would maybe be like the “Up Series” of documentary films that track a group of British children at seven-year intervals, going back to 1964.

The records detailed more of what I had seen before. There were blood draws and weighings, drug administrations and references to how eagerly he accepted treats. There was more diarrhea and minor trauma — an injured tongue, abrasions to the knee and thigh.

The study that ended r04040’s life began on Feb. 5, 2010. An operation was performed to cut down to the carotid artery in his neck — the one that delivers oxygenated blood to his brain. Then a neurotoxin was injected into the exposed artery.

This neurotoxin, according to an account of the study produced for my benefit by Chris Barncard, a UW science writer, was meant to cause neurological damage that produces Parkinson’s symptoms.

Shortly thereafter, r04040 began receiving injections as part of a “blind treatment” regimen. For each, he was sedated, so that he would not try to pull out the intravenous needle delivering the injected substance. Records show this was done more than 20 times over the next two and a half months.

Unknown to even the researchers, r04040 was part of the study’s control group, and thus received no actual treatment for the induced symptoms.

And then, on April 28, at 1:35 p.m., r04040 was euthanized and “submitted for pathological examination.” Various tests were performed and “the limbs were distributed for research/educational purposes.”

Eric Sandgren, director of the UW’s Research Animal Resource Center, personally examined the pancreases of animals in this study, his area of expertise. Sandgren is the UW’s leading defender of animal research, and he found this particular study easy to defend, especially since it led to a published paper.

The study that claimed r04040’s life, Barncard explained, probed a new approach to using a protein believed to have therapeutic value in treating Parkinson’s disease, stroke and other maladies.

Efforts to use this protein have been confounded by a protective “blood-brain barrier” that blocks potentially dangerous molecules. So researchers are seeking ways to trick the brain into accepting the protein, in this case by using a “Trojan horse” technique of pairing it with a different protein.

Twenty-two rhesus macaques were used. In the end, all of the animals were killed so their brains and other tissues could be examined.

The study found that the Trojan horse protein did not succeed in allowing the beneficial protein to enter, and that several of the monkeys who received the treatment developed lesions on the pancreas, a precursor to cancer.

A paper on the study, published in June 2012 in the journal PLOS ONE, reported that this approach was a failure. It was titled “A Monoclonal Antibody-GDNF Fusion Protein Is Not Neuroprotective and Is Associated with Proliferative Pancreatic Lesions in Parkinsonian Monkeys.”

For starters, he wrote, it revealed the danger this approach “may pose for human patients, damage it may have caused for 12 women who had volunteered for a human trial that was in the planning stages when r04040’s study was done. The study’s publication is a clear warning for other researchers who may have explored this avenue as a Parkinson’s treatment.”

Sandgren drives home this point: “These are people’s daughters and wives and mothers who were spared a treatment that would not have helped and may have given them pancreatic cancer.” He says the scientists who conduct animal research, like many of their critics, “are trying to make the world a better place, as they see it.”

A woman I know with Parkinson’s says she would not want the risk of a treatment that could benefit her borne by another living thing, human or animal. But Sandgren is probably right that this is a minority view, at least when it comes to animals.

Barncard said the study may also give “new life to pancreatic cancer research” by showing how to induce its symptoms in monkeys. This may help scientists “identify and test new methods of treatment for and early discovery of pancreatic cancer without endangering human patients.”

In other words, the UW stumbled on a way to make monkeys get pancreatic cancer, so they can be used in more studies.

There is another advantage to the experiment that the UW did not cite. It ended r04040’s life, which people who care about him might consider a mercy.

This story was written for Isthmus, a weekly newspaper in Madison. Bill Lueders, formerly news editor at Isthmus, now works for the Wisconsin Center for Investigative Journalism (www.WisconsinWatch.org) , which is making the story available for wider use. The Center collaborates with Wisconsin Public Radio, Wisconsin Public Television, other news media and the UW-Madison School of Journalism and Mass Communication. All works created, published, posted or disseminated by the Center do not necessarily reflect the views or opinions of UW-Madison or any of its affiliates.

2 thoughts on “On the death of my monkey”