Despite arrests, fines, convictions and prison time, many Wisconsin drivers continue to drink and drive. The Gannett Wisconsin Media Investigative Team in cooperation with the Wisconsin Center for Investigative Journalism in Madison is documenting the pervasive problem of repeat drunken driving that plagues this state in an eight-day series, Under the Influence.

Some drunken drivers are required to attend panels where they hear from victims of drunken driving and their families. But the panels often fail to keep offenders from driving drunk again, and may even increase the chances they will.

The panels, serving more than half of Wisconsin’s 72 counties, including Milwaukee, Dane and Brown, are generally run by restorative justice or victim advocacy groups. Offenders pay up to $60 to attend. 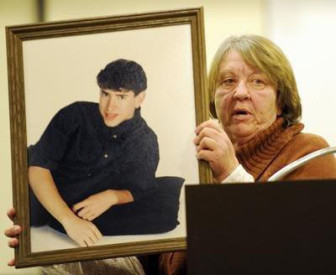 Geraldine Bartoli holds a picture of her son, Michael, who was killed in an accident with a drunken driver, during a victim impact panel in Fond Du Lac in March 2013. Advocacy groups say the panels allow victims to tell their stories, but some research indicates it may not reduce recidivism rates.

The panels aim to help offenders understand the consequences of their actions, said Tim Wavrunek, director of Eau Claire County Restorative Justice, a nonprofit focused on involving victims in the criminal justice process.

Wavrunek said the panels also allow victims to “share how their lives have been impacted.”

But Dr. Randall Brown, University of Wisconsin-Madison family medicine professor, said that while victim impact panels “sound like a good idea in theory,” they have not led to decreased recidivism rates.

In fact, one study found that women who attend victim impact panels are more likely to drink and become repeat offenders than those who do not. Researchers speculated that the experience caused depression and stress, prompting the women to resume drinking at usual or ever higher levels.