Matt Neumann needs only one word to describe Wisconsin’s recent record on renewable energy. He calls it “rotten.”

Neumann, president of the Wisconsin Solar Energy Industries Association, a trade group, is equally concise in ascribing blame: “The big change happened in 2010, when the Republicans took control of the governorship and Legislature.”

Such criticism may have greater weight given that Neumann is a self-described conservative who a few years back launched SunVest, a Pewaukee-based solar installation company, with his father, Mark. The elder Neumann is a former two-term Republican congressman who unsuccessfully challenged Scott Walker for his party’s nomination for governor in 2010.

Matt Neumann says the economics of solar power have improved dramatically in recent years, to where government subsidies are no longer needed. “But we still need policies that support the ability to install solar,” he says, adding that the state is missing opportunities to grow this sector of its economy.

Renew Wisconsin, a nonprofit advocacy group, has tallied that the number of new solar electric installations in Wisconsin fell from 339 in 2010 to 136 in 2012, then rose slightly to 194 in 2013. Meanwhile, new solar installations nationally grew by leaps and bounds. More than 150,000 were added last year, about three times as many as in 2010. 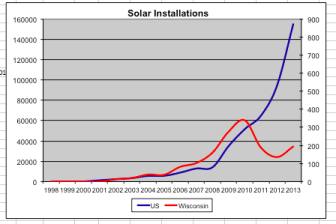 This chart produced by Renew Wisconsin shows the number of new solar electric installations in Wisconsin has fallen in recent years while nationally there has been a huge increase.

For wind power, Renew Wisconsin reports that the number of commercial turbines placed in service plunged from 215 in 2008 to just 10 in 2012. Wind power in Wisconsin has since “flatlined,” according to Michael Vickerman, the group’s program and policy director. No new turbines were added in 2013 and 2014, and none are planned by state utilities, he says.

“We’re definitely falling behind,” says Gary Radloff, a researcher with the Wisconsin Energy Institute at the University of Wisconsin-Madison. “It’s pretty remarkable and measurable.” Wisconsin had been seeing growth in this area before “this massive drop-off in the last few years.”

A recent poll by a bipartisan research team found that more than 80 percent of Wisconsin voters support raising the state’s use of various forms of renewable energy, including solar, wind and biomass.

Radloff says Wisconsin utilities are not rushing to add renewables because they have already met the state’s sole mandate of having 10 percent of electric power come from these sources by 2015. Roughly half of this energy is purchased from other states, as the law allows.

Other states have set higher thresholds, encouraging further investment. Minnesota, for instance, wants utilities to get 17 percent of electric power from renewables by 2016, and 25 percent by 2025.

Neumann calls on the state to change its laws to clearly allow companies like his to install and lease solar systems without being considered utilities. “We are already doing this in other states,” he says. “Unfortunately we cannot do it in Wisconsin.”

And Neumann is fighting proposed changes in rate structures being sought by utilities, which would remove some of the economic advantages of using solar or pursuing conservation. These changes, which Neumann calls an attempt to “kill” solar, are now before the state Public Service Commission, appointed by the governor. He is optimistic they will be rejected.

Mary Burke, the Democratic candidate for governor, has blasted Walker for his record on renewable energy and pledged to boost state investment in wind power, biofuels and digester technologies that turn waste to watts.

Walker spokeswoman Laurel Patrick, in a detailed email, said focusing on just solar and wind does not provide “a full picture” of what the governor has done. She noted steps the state has taken to support biodigesters and promote energy conservation.

Patrick did not say whether the governor supports raising how much electricity utilities must get from renewables beyond the current 10 percent, but cited a PSC memo that forecasts they will reach 11.5 percent by 2016.

Neumann, for his part, is optimistic, saying the climate for renewables will improve in Wisconsin as “conservatives recognize the economic opportunity.”