On Oct. 8, Mandy Wright held a fundraiser in Madison, at a bar across the street from the state Capitol. The event listing said “we will be accepting donations of $250 or $100” from host sponsors, “but please know that donations of any size are greatly appreciated.” 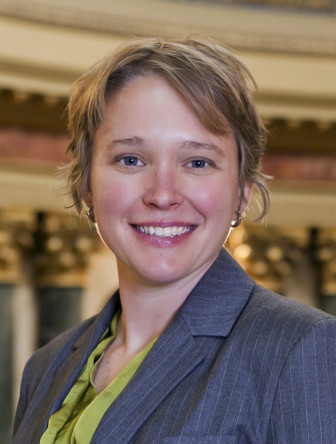 Mandy Wright: “You need the money to win.”

Wright, a freshman Democrat, is seeking re-election in the 85th Assembly district, which includes most of Wausau. It is a seat Republicans have targeted for defeat. Mindful of this, she’s held more than a dozen fundraisers since 2012 in her district and three outside of it.

“I am absolutely disgusted with money and politics,” she said. “But you need the money to win.”

Heaton has also held fundraisers; almost everyone who runs for office does. With the Nov. 4 election looming, dozens of political fundraisers are happening in Wisconsin each week.

On the same night as Wright’s event, a few miles away, GOP congressional candidate state Sen. Glenn Grothman held a fundraiser at the Madison home of former U.S. Senate candidate Eric Hovde. The host levels ranged from $2,600 to $500 per person, with $100 being the “General Reception Attendee” fee.

“There’s a lot of lobbyists who are going to be there who don’t generally support Democratic candidates,” Wright explained. “I don’t want to burn bridges.”

The excluded reporter, Grothman stressed, would not miss much: “People come in, they eat hors d’oeuvres. After a half-hour of socializing, Eric Hovde will introduce me. I will talk about my campaign and why it is a close race. People will leave contributions and go home.”

That is essentially what these events entail, but campaigns shroud them in as much secrecy as Yale’s Skull and Bones society. The giving of money to politicians occurs, as much as possible, out of public view.

That’s unfortunate, because some fundraisers sound like fun-raisers. Republican Gov. Scott Walker recently hosted a fundraising duck hunt, at $1,000 per hunter. Grothman and Walker teamed up for what was called “an afternoon BBQ!” And a group of dentists, perhaps trying to drum up future business, held a recent fundraiser for Mary Burke, Democratic candidate for governor, at a Madison cupcakery.

Fundraisers are a mainstay of political life. Wisconsin congressional Rep. Paul Ryan was listed as the special guest at 10 fundraisers for other Republicans from Oct. 3 to Oct. 21. In his own race for reelection, Ryan has raised $8.5 million.

Wright said her Oct. 8 event drew 40 to 50 people and that “I’m really happy with what we made.” She wouldn’t give an amount. She said each guest gets only a little facetime, adding “I spend a lot of time with people who are not my donors.”

Despite hiring a full-time person to attend to campaign-related tasks, Wright still devotes 10 to 20 hours a week during campaign season to raising funds. Having run for office to do good things, she said, “the need to raise significant amounts of money can feel very counterintuitive and becomes emotionally exhausting.”

Wright calls for nonpartisan redistricting to create more competitive districts, so the focus is not on a few swing seats like hers. And she favors public financing of campaigns, citing a New York City model in which donations of up to $175 are matched six to one, for candidates who accept strict spending limits.

“That would really boost the power of the small donor,” she said. And maybe lessen the need to fundraise.