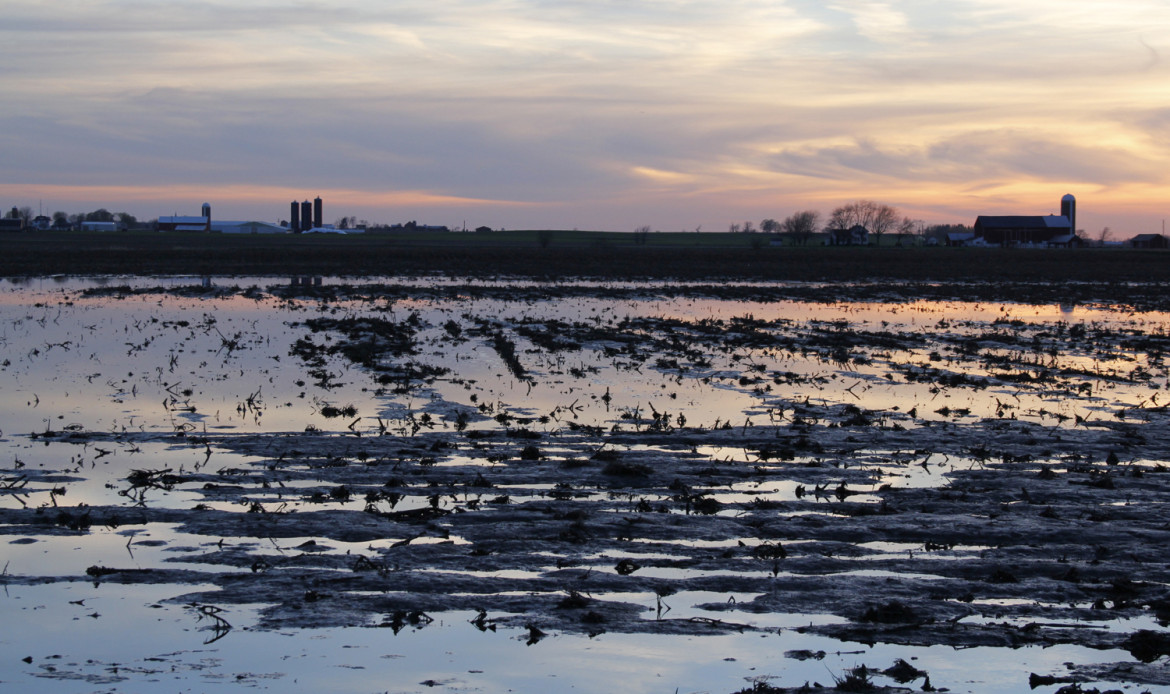 Flooded fields like this one from Calumet County, in May 2013, are innocuous when the ground below is clay, which protects the aquifers below. But if there are karst features like cracks or sinkholes, flooding means more risk that agricultural chemicals or manure will get into the groundwater below.

Read more of the Center’s coverage of threats to water quality and supply in Wisconsin.
Project: Water Watch Wisconsin

Jump to the text of Judge Boldt’s decision on Kinnard Farms Inc.

An administrative law judge says “massive regulatory failure” led to groundwater contamination in a dairy farming region and the Wisconsin Department of Natural Resources must use its powers to prevent further pollution.

In a ruling issued Wednesday, Judge Jeffrey Boldt ordered the DNR to modify a discharge permit for Kinnard Farms, an industrial-sized dairy farm in Kewaunee County, by requiring the operation to install at least six monitoring wells. Two of the wells should be on fields where manure is being spread, Boldt said. He also ordered the agency to cap the number of cows allowed on the big dairy, though he did not specify a maximum.

DNR officials previously testified that no large, permitted dairies, also known as concentrated animal feeding operations, or CAFOs, had ever been required to install monitoring wells.

Both sides in the controversy claimed victory after the ruling, which came in response to a challenge filed by five Kewaunee County residents.

The Dairy Business Association, the state’s most powerful dairy lobby, and the law firm that represented Kinnard noted that Boldt will allow the farm to expand after the DNR modifies its permit.

“We are pleased with the administrative law judge’s decision issued yesterday confirming that our client, Kinnard Farms Inc., was entitled to the permits the Wisconsin Department of Natural Resources issued for its dairy expansion,” said David Crass, a lawyer with Michael Best and Friedrich, which represented the farm. Crass is chairman of the law firm’s Agribusiness Practice.

Boldt cited testimony from town of Lincoln residents who challenged the DNR’s approval of the permit, which originally would have allowed the farm to expand its operation by about 55 percent, to 6,200 cattle, producing more than 70 million gallons of manure a year.

“The proliferation of contaminated wells represents a massive regulatory failure to protect groundwater in the town of Lincoln,” Boldt wrote. “The department needs to utilize its clear regulatory authority to require groundwater monitoring to enhance its ability to prevent further groundwater contamination.”

Lynda Cochart, one of the petitioners, praised the additional protection of monitoring wells, which allow the tracking of pollutants.

“He obviously listened to our testimony and is concerned about our health and welfare,” Cochart said. “It is unfortunate that we had to go through so much to get this result.”

Boldt, in his ruling, called the condition of the area’s groundwater a “crisis.” He cited testimony from residents who told of being sickened by polluted water and eating anti-diarrhea medicine “like it was candy.” He also wrote that “numerous witnesses testified credibly and forcefully about the hardship and financial ruin that well water contamination has had on their businesses, homes and daily life.”

“It is not unreasonable for residents to see a link to large farming practices in the area,” Boldt wrote. “It is more likely than not that some portion of this contamination is from CAFO landspreading in a county where, according to unrebutted public testimony, there are more than a dozen permitted CAFOs and vast areas of its farmland subject to landspreading contracts.”

Despite repeated requests from residents, the DNR had insisted monitoring was unnecessary for the farm because of sufficient protections in the permit.

“When Boldt uses the broad term ‘regulatory failure,’ he declined to fault DNR over the county health departments and other regulatory entities shown in the record to play a role in safe drinking water,” Cosh said. “No one is disputing that groundwater is a problem in Kewaunee County. But Judge Boldt specifically refused to hold this permit or this permittee, or even the DNR accountable for that.”

Cosh said Boldt was instead referring to the body of regulation as a whole as being inadequate. “He is not referring to a ‘regulator,’ but the regulations themselves,” Cosh added.

In his ruling, however, Boldt faulted the DNR for failing to use laws that are already in place, such as statutes that give it the authority to require monitoring wells in regions that are more susceptible to pollution because of the underlying geology.

Kimberlee Wright, executive director of Midwest Environmental Advocates, the law firm that represented the five residents who challenged the Kinnard permit, said Boldt was referring at least in part to DNR regulatory failings.

“Ultimately, citizens shouldn’t have to sue their own government to enforce laws that protect our water,” Wright said, noting that Kinnard Farms is just one of 15 industrial livestock facilities in their area. “Citizens can’t challenge every permit to get the DNR to do what it takes to keep nitrates and bacteria out of their drinking water. This is what regulatory failure looks like.”

Boldt did not support the residents in their claim that the CAFO permit was issued before the agency had received and approved plans for the expansion. Nor did he support their challenge of the farm’s manure management plan.

“We are pleased this decision allows the Kinnards’ family-run dairy to continue to grow and do well,” read a statement released by the DBA Thursday. “The farm’s expansion can now proceed with no significant change to the already existing regulatory scheme.”

Boldt’s Kinnard ruling represents the third time he has at ruled on CAFO-related challenges this fall.

Previously, he ordered the DNR to consider the broader environmental impacts of high-capacity wells sought by the Richfield Dairy in Adams County. And, in a case involving the New Chester Dairy in Adams County, Boldt supported the DNR when the farm challenged an order from the agency for monitoring of groundwater levels.

On Oct. 22, a coalition of environmental groups petitioned the U.S. Environmental Protection Agency to use its emergency authority under the Safe Drinking Water Act to investigate drinking water pollution from dairy manure in Kewaunee County.

James Saul, an environmental lawyer with the Madison law firm McGillivray, Westerberg and Bender, which has also been involved in actions challenging the permitting of large farms, said the combined impact of Boldt’s recent rulings will be far-reaching.

Saul’s firm was not involved in the Kinnard case, though he formerly worked for Midwest Environmental Advocates.

“I think we’re starting to see some substantial policy changes in the way the DNR regulates agriculture, especially in the areas of the state that are vulnerable, like Kewaunee County,” Saul said.

Boldt acknowledged what concerned residents and many hydrogeologists have been saying for some time — that the areas of the state with fractured karst geology deserve extra protection from the huge volumes of manure produced by farms. The fractures in such bedrock allow excessive amounts of liquid manure to more easily reach groundwater.

Saul was impressed that Boldt “really honed in on the vulnerability of the landscape.”

“The DNR really needs to look at that,” Saul said. “Should it be standard practice to have groundwater monitoring in karst areas? I think the answer is now ‘Yes.’ ”

Note: This story has been corrected to clarify that Judge Jeffrey Boldt’s ruling in the New Chester Dairy case in Adams County supported the DNR when the farm challenged an order from the agency for monitoring of groundwater levels.