This story was changed 5 p.m. Oct. 23, 2014, to include new responses from the state, EPA and Dairy Business Association.

Citing a rash of contaminated wells in Kewaunee County, a coalition of environmental groups on Wednesday petitioned the U.S. Environmental Protection Agency to use its emergency authority to investigate pollution of groundwater from dairy manure.

They point to manure from animal agriculture as the leading risk to the region’s drinking water supplies and therefore the health of residents, and say state and local authorities have not done enough. 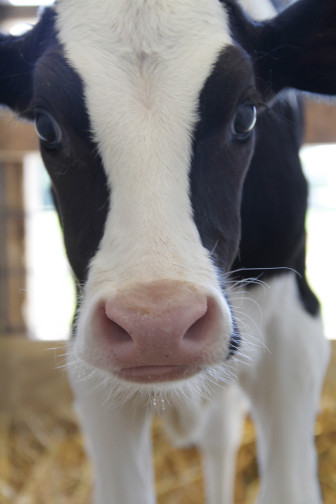 Environmental groups argue that dairy farming is the leading source of groundwater pollution in Kewaunee County.

“No one should be allowed to do this to another human being. We cannot live without safe water and air,” wrote Lynda Cochart, a county resident and water quality activist, in one of 50 attachments to the petition.

Two Wisconsin Center for Investigative Journalism articles, on manure irrigation and the discovery of hormonal well water, were among the exhibits included with the petition.

The groups are hoping that EPA will act as it did in 2013 in Washington’s Yakima Valley. The EPA, using its authority under the Safe Drinking Water Act, negotiated with five dairies to change their manure handling practices after finding that dairies were the likely source of nitrate pollution.

In Kewaunee County, groundwater is the only source of drinking water for most people. As of June 2013, 31 percent of the wells had tested as unsafe due to nitrates or bacteria, with individual townships ranging from 14 to 51 percent.

Nitrates in water are associated with birth defects and blue baby syndrome, a potentially fatal disease in which babies cannot get enough oxygen to their cells. Bacteria are an indicator for pathogens from human or animal waste that can cause gastrointestinal illness and other problems.

Elizabeth Wheeler, a Clean Wisconsin attorney, said the EPA’s first task would be to provide people with clean water. Second, “there’s been a lot of finger-pointing” that the agency could clear up, she said.

The largest farms, producing gigantic amounts of manure, have attracted the most controversy. But smaller farms are less regulated. And farmers often point to septic systems, which have also contaminated groundwater, although they account for a fraction of the pollution inputs that manure does.

“Once you identify the source, you can remediate it,” Wheeler said.

The state’s main dairy lobby, the Dairy Business Association, acknowledged in a Green Bay Press-Gazette op-ed Sept. 17 that the area has a groundwater problem but says that the statistics have been skewed to disproportionately weight data from the towns with the biggest problems, and that singling out land application of wastes “may not” fix the water problems.

“The right to petition the government is fundamental and we wholeheartedly support anyone’s ability to do so. The petitioners emphasis on CAFOs is misplaced as large farmers are already highly regulated. The end result of the petitioners’ efforts may be evidence that supports our position that a serious conversation needs to occur about the impact of unregulated, non-CAFO (concentrated animal feeding operations), farms on the environment. This includes non-dairy farms. This is the only way that we can ensure we all have the clean water necessary.”

Kewaunee County officials and the Dairy Business Association did not respond immediately to requests for comment, and EPA declined to comment.

The petitioners chose Kewaunee County because “the issue is ripe” there, Wheeler said. The county is one of several in northeastern Wisconsin where thin soils and cracked karst bedrock make groundwater vulnerable, and there is a lot of data on the well issues.

While the number of CAFOs — the largest farms, with at least 700 dairy cows — has skyrocketed statewide, Kewaunee is one of just four Wisconsin counties where the number of dairy cows rose in the past three decades, according to DNR records cited in the petition.

The county has about 200 dairy farms, including 15 classified as CAFOs, which are under stricter manure-handling regulations.

Petitioners also cited DNR evidence that the county’s cropland has a carrying capacity for 11.3 million pounds of nitrogen, while manure produced there accounts for about 12.4 million pounds — leaving a surplus of about 1.2 million pounds.

In an attempt to prevent further pollution, the Kewaunee County board in September adopted an ordinance to prevent winter and spring waste spreading on areas with 20 feet or less to bedrock. The ordinance was opposed by statewide farming groups, which called it illegal, but it passed 20-0.

The petitioners said the ordinance, which voters must approve in a spring referendum to be enforceable, does not go far enough to solve the area’s problems.

A decision is expected soon in a Kewaunee County lawsuit raising similar issues. Residents living near Kinnard Farms sued to force the DNR to impose groundwater monitoring and a cap on the number of cattle at the facility. The DNR argued that Kinnard’s plans included some of the most protective safeguards in the state; Kinnard hopes to expand by 55 percent to about 6,200 cattle.

Nitrates and bacteria, the most common well tests, are the contaminants for which there are state and federal health standards. Scientists are also investigating a host of other drinking water contaminants from both animal and human waste that could cause other problems — like disrupting the hormones of people and wildlife, or contributing to the rise of antibiotic-resistant infections.