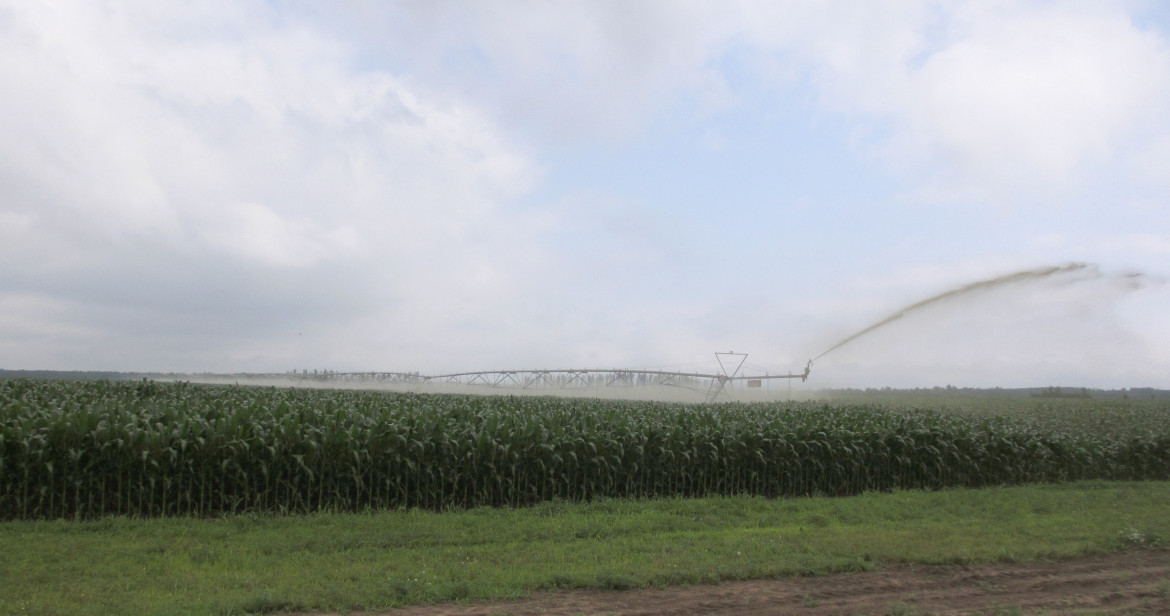 A center pivot manure irrigation system is used to spread manure on a Wisconsin corn field. Courtesy of Wisconsin Department of Natural Resources

A recent legal decision is likely to significantly change how Wisconsin manages its groundwater and will especially affect the state’s sandy counties where powerful wells are irrigating potato fields, servicing giant dairies, and providing water critical for the state’s frac sand mining boom.

The growth in large dairies, and concerns about manure disposal from operations of all sizes, have fueled efforts to more tightly regulate their operations or siting. A partial roundup:

State regulations: The state’s Livestock Facility Siting Law is up for its second four-year review this year. The law was designed to streamline and standardize rules for large farms — but it has been criticized since its 2006 inception for taking away local control, because it largely prevents local governments from enacting laws any stricter than state standards. The previous review resulted in no changes.

• The Kewaunee County Board votes this month on whether to limit waste spreading on fields with thin soils over cracked karst carbonate bedrock from Jan. 1 to April 15 to prevent more contamination in an area with many polluted wells.

• The Town of Magnolia, in Rock County, tried in 2008 to pass more stringent water quality standards for livestock operations under the state livestock facility siting law, but the law was struck down by the Wisconsin Supreme Court.

• Manitowoc County is one of the few counties that has enacted stricter standards for manure spreading, requiring wider setbacks to streams back in 1998 — before the surge in large livestock farms and siting law. The state approved the change, as did voters in a series of town referendums.

• An appeals court in July upheld an order to Town of Saratoga officials to issue building permits for the 5,300-animal Golden Sands Dairy. The dairy applied for the permit at a point in 2012 when the Wood County town was working on, but had not enacted, a zoning ordinance that would prohibit it.

Lawsuits: Milk Source Holdings LLC challenged DNR’s requirement of groundwater quantity monitoring at its New Chester Dairy in Adams County; environmental advocates Clean Wisconsin intervened to side with the DNR. The case is before the same judge, Jeffrey Boldt, and is on a similar timeline to the Richfield Dairy case; a decision is expected soon.

• Boldt may also issue a decision soon in the case of Kinnard Farms’ expansion to about 6,200 cattle. Citizenschallenged the permit to force the DNR to impose groundwater and surface water quality monitoring and to limit the number of cows at the Kewaunee County dairy.

Permit controversy: DNR officials raised citizen concerns when issuing a permit to the Burr Oak heifer facility in Adams County that would allow it to exceed health standards for nitrates in the groundwater. The farm and DNR argue background levels were already high, and Burr Oak shouldn’t be responsible for others’ pollution. The final permit is expected to be issued this month.

Lawmaker flip-flops: State Rep. Scott Krug, R-Rome, said in August that high E. coli levels at Wood County beaches and low water levels in local lakes prompted him to oppose the construction of the Golden Sands dairy in Saratoga. He asked the DNR to deny the dairy’s permit application for 10 high-capacity wells.