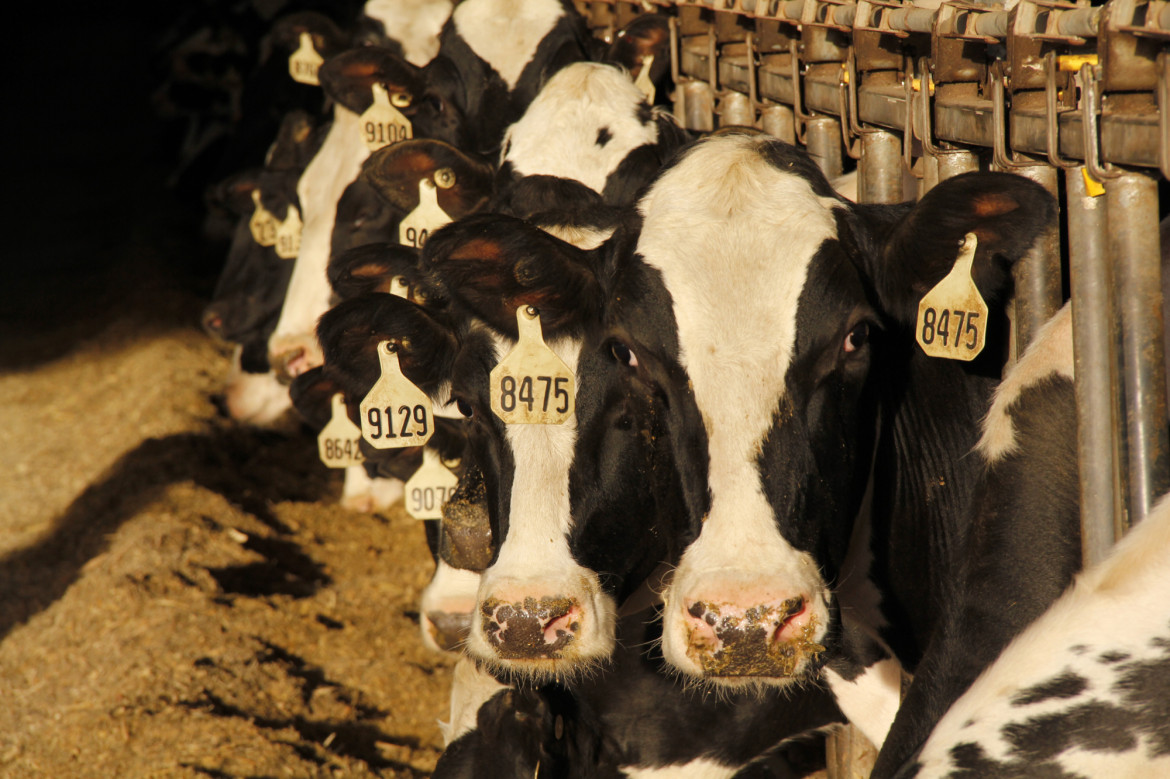 The number of CAFOs, or concentrated animal feeding operations, has shot up in the past decade — as have concerns about their impact on water quality and quantity.

This is the first report produced in The Confluence, a collaborative project involving the Wisconsin Center for Investigative Journalism and students and faculty of the University of Wisconsin-Madison School of Journalism and Mass Communication. The Confluence aims to  teach students investigative reporting skills while exploring water quality and supply issues in the Center’s ongoing Water Watch Wisconsin project. The Confluence is supported by a grant managed by the Online News Association and funded by the Excellence and Ethics in Journalism Foundation, the Robert R. McCormick Foundation, the John S. and James L. Knight Foundation and the Democracy Fund.

Water Watch Wisconsin is supported by The Joyce Foundation.

A recent legal decision is likely to significantly change how Wisconsin manages its groundwater and will especially affect the state’s sandy counties where powerful wells are irrigating potato fields, servicing giant dairies, and providing water critical for the state’s frac sand mining boom.

Two weeks ago, Administrative Law Judge Jeffrey Boldt approved the state Department of Natural Resources’ issuance of permits for a large and controversial dairy farm in Central Wisconsin. But he also reduced the amount of water the farm could pump from proposed high-capacity wells and required the DNR to consider the impact of the withdrawals in conjunction with other, nearby wells — a concept known as cumulative impacts.

In the days since the decision, Boldt’s opinion on the DNR’s responsibility has far overshadowed his approval of the proposed 4,300-cow Richfield Dairy in Adams County. According to many expert observers, his ruling could force the DNR to conduct much more rigorous reviews of applications for the high-volume wells.

Rich Budinger, director of sand operations for Fairmount Santrol (formerly Fairmount Minerals) and president of the Wisconsin Industrial Sand Association, said Boldt did not make clear how the DNR should conduct such analyses.

“That creates uncertainty not only for businesses that want to install high-capacity wells, but also for those who currently use them,” Budinger said.

It remains unclear whether the DNR will appeal the decision. Agency spokesman Bill Cosh said DNR lawyers are still studying the opinion.

But in a news release, the agency said it had scheduled a hearing for Oct. 14 in Adams County on Richfield Dairy’s draft environmental impact statement. The release said the rewritten impact statement “addresses the concerns” raised in Boldt’s opinion. There was no indication, however, whether the agency will consider cumulative impacts for other proposed high-capacity wells in the future.

“The decision does impact the department,” Cosh said in a written statement from the agency, “and we need to take the appropriate amount of time to evaluate its impact.” He declined to elaborate, saying, “The statement is the statement.”

Boldt’s 25-page opinion also laid bare a chasm between politically appointed administrators and professional scientific staff at the DNR, whose testimony during the hearing ran counter to the agency’s legal policy.

The DNR’s chief of the water use section, Boldt noted, “testified that DNR regional biologists would have preferred ‘from a scientific perspective’ to consider and regulate” the cumulative impacts of the proposed wells.

Boldt’s ruling is important because of the growing environmental impact caused by a dramatic increase in the number of high-capacity wells, which are used by cities, large farms and industries. Most can pump more than 70 gallons of water a minute. Smaller residential wells pump a minimum of 6 gallons per minute. The number of high-capacity wells in the Central Sands has increased from around 100 in the 1950s to 3,231 today.

The DNR’s approval of the Richfield Dairy permits was challenged by residents near the proposed farm as well as the groups Friends of the Central Sands, Family Farm Defenders, and the Pleasant Lake Management District. Environmentalists are hailing the decision as a victory in efforts to strengthen protection for groundwater and heighten oversight of the giant dairies.

Though Boldt’s ruling dealt with one of the many large farms in the area, dairies actually account for only about two percent of the water use. Agricultural irrigation for operations such as potato farms and municipalities use much larger amounts.

But the combined impact of high-capacity wells in the region is causing documented problems.

“We’ve seen too many muddy lakefronts, dry wells and shallow streams,” said Elizabeth Wheeler, a lawyer with the environmental group Clean Wisconsin. “Going forward, the DNR will be required to acknowledge the damage over-pumping already has done to our water resources, and regulate accordingly.”

Groundwater withdrawals by sector in 2013.

Milk Source Holdings LLC, the corporation that wants to build the farm, also described Boldt’s approval of the Richfield permits as a victory. Even so, Michael Best & Friedrich, the farm’s law firm, issued a “client alert” that put the decision in a different light. The alert on the firm’s web site is titled “Administrative Decision Signals Potential Shift in Wisconsin Water Law.”

Attorney David Crass wrote that decisions by administrative law judges “are generally not considered binding or precedential legal authority” and should only be applied to this case.

But he wrote the ruling is “very likely” to force DNR to consider cumulative impacts of wells “in myriad settings, including for industrial uses, municipal water supply services and golf course/water park development, among others.”

Sinderbrand said the decision may also force the Legislature to revisit a 2013 amendment to the state budget that restricts challenges to high-capacity well permits.

“They ought to look at this decision,” Sinderbrand said, “and fix the mistake they made in the budget bill.”

Sinderbrand argued during the hearing that the agency’s failure to consider cumulative impacts violated its public trust responsibilities under the state’s constitution. The Public Trust Doctrine holds that Wisconsin’s waters are held in trust by the state for the public. In his opinion, Boldt agreed with Sinderbrand and said the agency has a “clear legal duty to ‘protect, maintain and improve the quality and management of the waters of the State, ground and surface, public and private.’ ”

Lawyers for the DNR and the dairy said during testimony that the agency’s policy of not considering cumulative impacts is based on interpretations of previous court decisions. 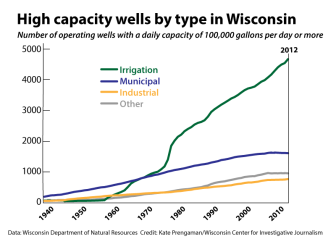 Boldt, however, said the agency “took an unreasonably limited view of its authority to regulate high-capacity well permit applications to reach the conclusion that it lacks the authority to consider cumulative impacts.”

Laurie Fischer, with the Dairy Business Association, said that the ruling could make the permitting process more cumbersome.

“This could have the effect of slowing future dairy developments and could deter some farmers from building or expanding here in Wisconsin. DBA is concerned about any changes that could slow or hinder the industry’s growth,” Fischer said.

But water experts on both sides testified during the Richfield hearing that preventing drawdowns requires the consideration of cumulative impacts.

George Kraft, professor of water resources and director of the Center for Watershed Science and Education at the University of Wisconsin-Stevens Point, said during his testimony that his own study showed the Richfield Dairy wells, even pumping at the reduced level ordered by Boldt, would draw down nearby Pleasant Lake an extra 2 inches on top of the existing 1.5-foot drawdown. He also said modeling showed flows in nearby headwater streams would be reduced by more than 5 percent in some stretches.

Boldt pointed out several times that even DNR staffers indicated they were uncomfortable not considering cumulative impacts. He cited an October 2011 phone conversation between DNR administrators and area water resources and fisheries managers.

“In this phone conversation,” Boldt wrote, “DNR management conveyed the agency’s newly formulated legal position that DNR does not have the authority to consider cumulative impacts when making a decision on a high-capacity well application. DNR scientists and regional biologists stated they would prefer to be able to take such impacts into account to better manage the resource by incorporating water resource science, and because they were concerned about existing impacts already experienced as a result of water pumping.”

Kraft said testimony during the hearing made clear the frequent differences between politically appointed administrators at the agency and career scientists. “The people that make the policy are political appointees,” he said. “They say, ‘Here are the rules and we are going to look at them in a certain way.’ ”

He said the gap reflects changes at the regulatory agency that emphasize economic development and being helpful to businesses as much as oversight.

Ron Seely, Madeleine Behr and Taylor Chase are reporters for the Wisconsin Center for Investigative Journalism. Behr and Chase also are enrolled in one of eight journalism classes participating in The Confluence, a collaborative project involving the Center and UW-Madison School of Journalism and Mass Communication. The nonprofit Center (www.WisconsinWatch.org) collaborates with Wisconsin Public Radio, Wisconsin Public Television, other news media and the journalism school. All works created, published, posted or disseminated by the Center do not necessarily reflect the views or opinions of UW-Madison or any of its affiliates.