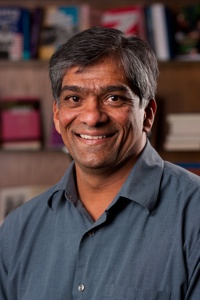 Hemant Shah, director of the University of Wisconsin-Madison School of Journalism and Mass Communication, has been elected to the board of directors of the Wisconsin Center for Investigative Journalism.

“We are delighted that Hemant Shah has joined the board of directors,” board president Brant Houston said. “He brings an incredible breadth of knowledge and experience to the board and furthers the strong working relationship between the center and school.”

The Center, an award-winning nonprofit and nonpartisan news organization, is housed at the School of Journalism and Mass Communication on the UW-Madison campus. Under a facilities use agreement, the Center receives office space in return for hiring paid interns from the school and providing educational services including collaborations and guest lectures with journalism classes. The Center and school received the Associated Press Media Editors’ inaugural Innovator of the Year for College Students award in 2012 in recognition of the successful collaboration.

Shah, elected director of the School of Journalism and Mass Communication in May, is an expert in diversity and disparity in mass communication. His work has focused on pressing issues of our time, including the debate over immigration and the aftermath of Hurricane Katrina.

He is the author of several books, including most recently, “The Production of Modernization: Daniel Lerner, Mass Media and the Passing of Traditional Society” (Temple University Press, 2011).

Other members of the WCIJ board are:

Brant Houston, board president. Houston is the John S. and James L. Knight Foundation Chair in Investigative and Enterprise Reporting and teaches investigative and advanced reporting in the Department of Journalism at the University of Illinois. He is a founder and chair of the board of directors for the Investigative News Network, a consortium of nonprofit investigative news organizations.

Karen Lincoln Michel, board vice president. Lincoln Michel, a veteran editor, writer and newsroom leader, writes a blog, “A Digital Native American: Views of a Ho-Chunk Journalist.” She is a former executive editor of The Daily Advertiser in Lafayette, La., and assistant managing editor of the Green Bay Press-Gazette. She is a nationally noted leader in Native American journalism and newsroom diversity and a member of the Ho-Chunk tribe in Wisconsin.

Jack Mitchell, board secretary. Professor Emeritus Mitchell joined the UW-Madison journalism faculty in January 1998 after a 30-year career in public radio. As director of Wisconsin Public Radio for 21 years, Mitchell led the most extensive and successful state or university public radio system in the country. On a national level, Mitchell was the first employee of National Public Radio and was instrumental in developing the groundbreaking newsmagazine “All Things Considered.”

Keith Baumgartner, board treasurer. Baumgartner has been a certified public accountant with Smith & Gesteland, LLP in Madison since 1985, and was appointed partner in 2000. He is the director of assurance services and chairperson of the Nonprofit Services Group, serving clients that include nonprofits, construction entities, manufacturing, financial institutions and distributors.

Charles Lewis, board member. Lewis is Distinguished Journalist in Residence and executive editor of the Investigative Reporting Workshop at American University School of Communication. Lewis is an investigative journalist and bestselling author who has founded or co-founded three nonprofit organizations, including the Center for Public Integrity.

Herman Baumann, board member. Baumann is the principal and managing director of Green Line Strategies, LLC in Middleton, Wis., whose mission is to help associations improve their non-dues revenue in support of their missions and members. He is an expert in sponsorship and advertising, newsletters and magazines, Internet strategies, executive education, and large-scale health promotion and disease prevention programs.

The Center is increasing the quality and quantity of investigative reporting in Wisconsin, while training current and future generations of investigative journalists. Its work fosters an informed citizenry and strengthens democracy. Its guiding principles: Protect the vulnerable. Expose wrongdoing. Seek solutions.

News coverage is focused on government integrity and quality of life issues — environment, education, economy, health and the justice system — of importance to people in Wisconsin.

Since its launch in 2009, the Center has produced more than 160 major reports and 160 Money and Politics columns through its website, WisconsinWatch.org, that have been published or cited by more than 230 news organizations. Its coverage has reached an estimated audience of more than 35 million and has received 25 Milwaukee Press Club awards. Its website lists where the stories are picked up and examples of their impact.