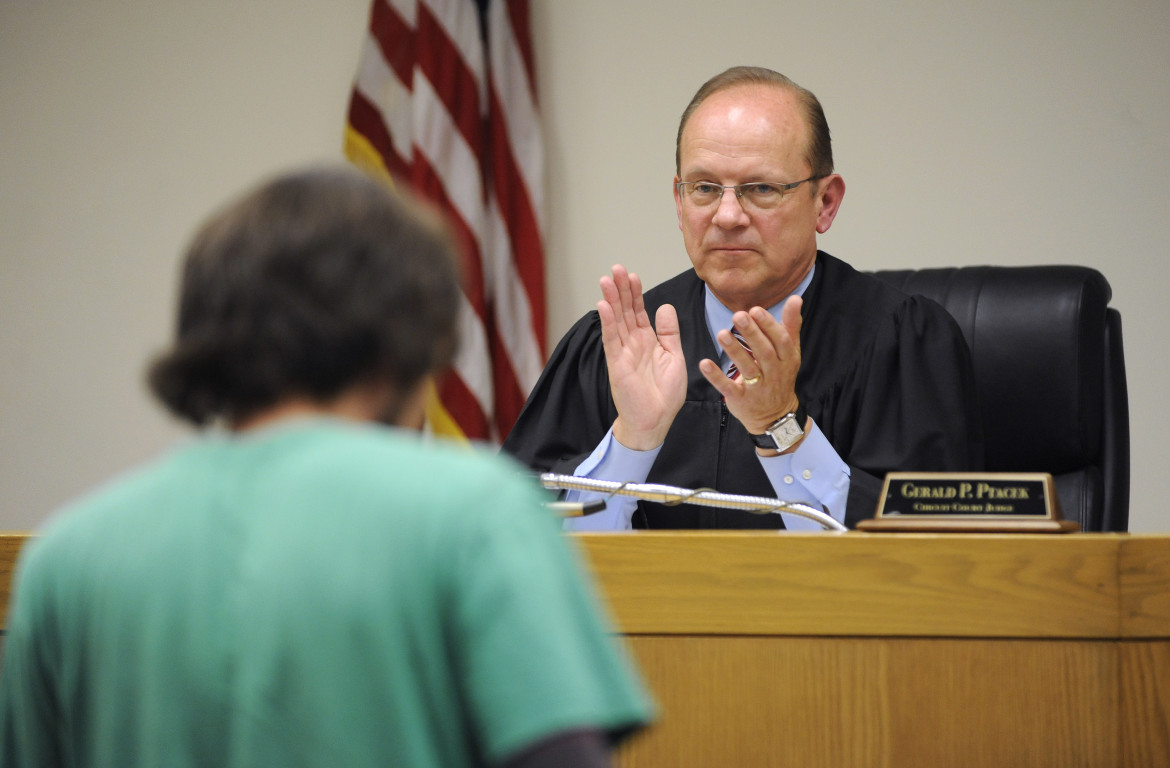 Racine County Judge Gerald Ptacek applauds after a defendant relates a story of success or progress in Racine County's Alcohol and Drug Treatment Court during this April 2012 session. Drug courts such as this one in Racine are seen as an effective way to cut incarceration costs and recidivism. But minority defendants in Wisconsin tend to be underrepresented in these diversion programs.

In 2002, 27 people died of heroin overdoses in Wisconsin. A decade later, the toll skyrocketed to 187 deaths.

While funding for drug courts and similar treatment programs have multiplied fourfold throughout the state, blacks make up just 10 percent of those involved in drug courts while their arrest rate for drug crimes is much higher. Experts are unsure what exactly is causing the disparity between blacks and whites.

Last year, state Rep. John Nygren, R-Marinette, broke away from his party’s historical tough-on-crime stance to sponsor a handful of anti-heroin laws with broad bipartisan support after his own daughter almost died from heroin. The measures boosted funding for heroin treatment, increased the availability of drugs to counteract heroin overdoses and provided immunity for people reporting overdoses.

Heroin has quickly become the most visible drug on the radar for those who work with addicts and in the state’s criminal justice system. Experts say it is the emergence of this drug that partially accounts for the racial disparities in Wisconsin’s drug courts.

“When I look at the racial numbers from 2009 to today, the proportion of African-Americans has gone down as the proportion of heroin addicts has gone up,” said Milwaukee County Circuit Judge Ellen Brostrom, who runs that county’s drug court. “The problem with heroin is it’s such a dangerous drug in terms of the dangers of overdoses.”

According to a recent study by Washington University in St. Louis, 90 percent of heroin users are white, and most are young and live in the suburbs. By contrast, hospital studies show that African-Americans are much more likely than whites to abuse cocaine. And one University of Wisconsin-Madison expert said heroin addicts tend to commit less violent crimes than those on cocaine; many drug courts exclude violent offenders from participating.

The result: Some drug courts, such as the one in Dane County, are now full of white heroin users.

“As soon as I left, the heroin epidemic started,” said former judge Sarah O’Brien, who ran Dane County’s drug court until her retirement in 2012. “And heroin users are so disproportionately white, they just flooded the (drug) court.”

The Washington University study found the path to heroin addiction usually starts with prescription painkillers. Once people are hooked, they sometimes turn to heroin for a similar high at a fraction of the cost, the study’s author, Dr. Theodore Cicero, has said.

His study found that the demographics have shifted “from an inner-city minority-centered problem to one… involving primarily white men and women in their late 20s living outside of large urban areas.” 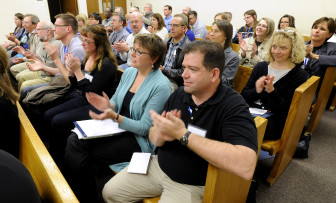 A gallery composed mainly of members of the Wisconsin Association of Treatment Court Professionals applaud for a defendant during an April 2012 session in Racine County\’s Alcohol and Drug Treatment Court. Drug courts such as this one in Racine are seen as an effective way to cut incarceration costs and recidivism. But minority defendants in Wisconsin tend to be underrepresented in these diversion programs.

Dr. Randall Brown, an associate professor at UW-Madison and director of the Center for Addictive Disorders, said he does not know if drug courts are necessarily “avoiding” cocaine abusers. But, he said, “it just seems like cocaine has faded into the background, and heroin and opiates have come to the fore.”

“We’re seeing a lot more in the media about heroin versus cocaine,” Brown said. “There may be political pressures to be cracking down on that more since it’s getting out into rural areas, people are using it younger and people are dying more frequently.”

Brown said how the two drugs work on the brain could help explain the disparities because they correlate with the types of crime a user is likely to commit. Cocaine, for example, causes changes in the brain that regulate impulses, leading to violent and aggressive behaviors — just the type of crime that can disqualify someone from drug court.

Heroin usually results in more “inquisitive” crime, said Brown, such as robbing a bank or selling drugs, crimes that do not disqualify a person from receiving treatment.

Brown said the symptoms of heroin withdrawal can be treated with medications such as suboxone. But there is no similar “magic bullet” for cocaine withdrawal, which often involves exhaustion and depression, he said.

The Dane County drug court recently underwent a reorganization to focus on more high-risk offenders, which could lead to increased participation by African-Americans and other minorities.

But Dane County Circuit Judge Juan Colas, who now runs the drug court, said those efforts might be eclipsed by the wave of heroin addicts now flooding the criminal justice system.

“The proportion between cocaine and heroin has flipped … so now we’ve made these changes in drug courts, and at the same time drug profiles of addicts have changed,” Colas said. “It could be these things have cancelled each other out.”