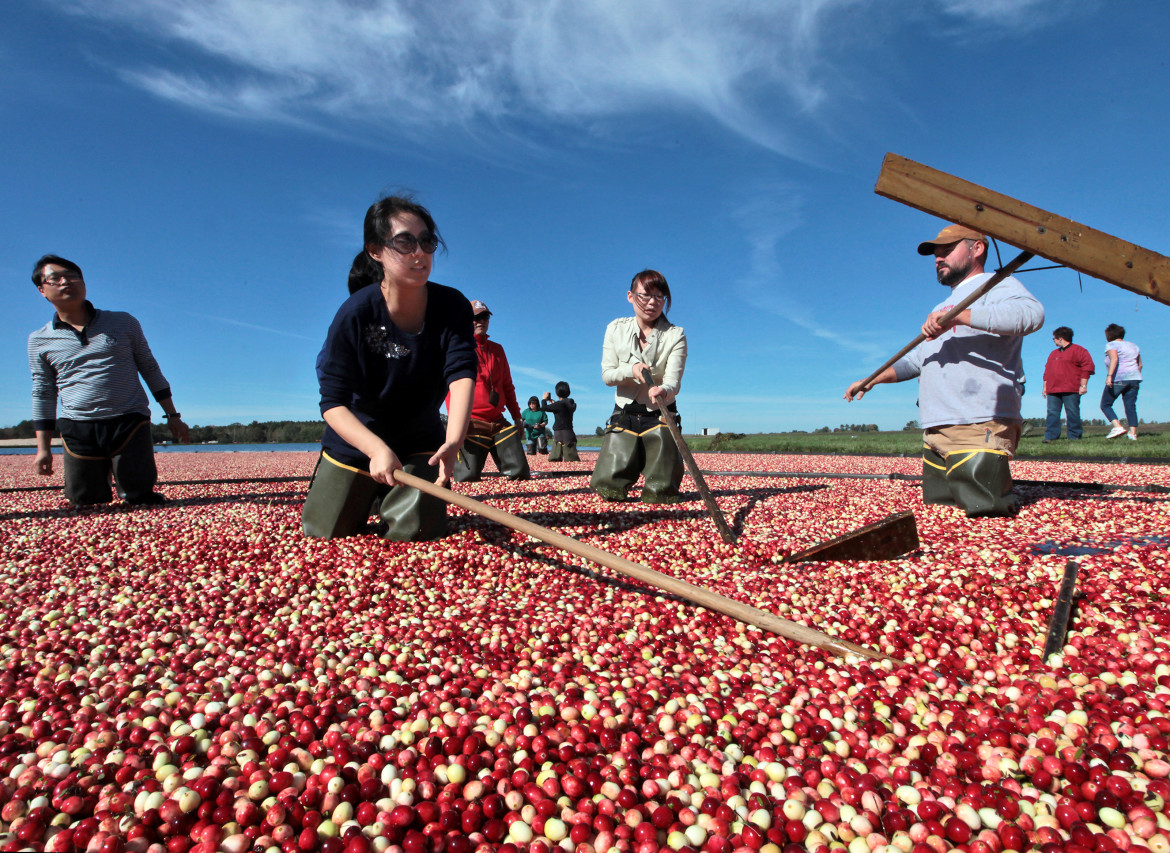 Visiting South Korean journalists, including Jin-ju Lee, front, guide floating cranberries toward a conveyor during a tour of the growing and harvesting operations of the Cranmoor Cranberry Co. in Nekoosa last October. The industry-sponsored tour was aimed at introducing the fruit to South Koreans. Cranberry growers are using a variety of methods to boost exports to deal with oversupply, which is driving down prices.

Ads in 60 restaurants across the Midwest and billboards in western Wisconsin show the VanWychen family of Wetherby Cranberry Co. sporting hip boots with iconic Ronald McDonald in their cranberry marsh near Warrens.

McDonald’s contacted the VanWychens after learning about their public harvest days and wanted to take photos to promote the use of sweetened and dried cranberries in its breakfast oatmeal.

McDonald’s restaurants do not use the VanWychen’s cranberries, but instead use Ocean Spray Craisins.

VanWychen said she does not mind that McDonald’s does not buy her cranberries. What matters is getting more people to eat cranberries — and reducing the oversupply that has pushed prices down and cut into growers’ revenues.

The problem is felt especially in Wisconsin, which has long been the world’s No. 1 producer of the tiny hard red berries. They are used in jellied cranberry sauce, juices, jams and, when dried, in cereals and other products. 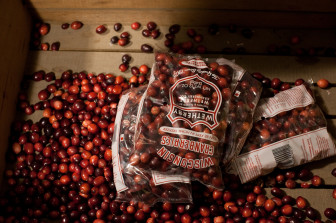 With a large increase nationwide in cranberry production, growers and industry leaders are trying to boost exports and add cranberry products to the National School Lunch Program, among other strategies.

“Our challenge is to obviously try to find new products, and develop new products as an industry,” said VanWychen, one of the independent growers in Wisconsin who is not part of the Ocean Spray cooperative. “Also, to create new markets, expand our export market, and also tell our story about the goodness of the fact that we have a healthy product for the general public.”

The industry has also taken its problem to Congress. Congressional members from cranberry growing states including Wisconsin in 2012 created the informal Congressional Cranberry Caucus to help the industry.

The effort has paid off.

Cranberry sauce was previously the only cranberry product on the U.S. Department of Agriculture’s school lunch menu, said Scott Soares, executive director of the Cranberry Marketing Committee, a federally recognized agricultural marketing group supported in part by fees charged to handlers who arrange sales of cranberries from growers.

In January, the USDA also bought $28 million in surplus cranberries to be distributed to local food pantries, thanks to the Congressional Cranberry Caucus.

The state cranberry association has gone to the caucus to push for funding for research as part of the 2014 Farm Bill, said Tom Lochner, executive director of the Wisconsin State Cranberry Growers Association.

And Lochner said the group worked with Wisconsin delegation members including U.S. Sens. Tammy Baldwin and Ron Johnson and U.S. Reps. Reid Ribble, Tom Petri, Sean Duffy and Ron Kind, to get $1.6 million for the Cranberry Marketing Committee to expand international sales, which currently make up between 25 and 30 percent of the demand.

Over the past two years, Soares said the CMC has expanded its marketing efforts to Brazil, Russia and India. Ocean Spray has held promotional events including in Dublin, where the cooperative created a mock cranberry bog in a country that knows a wee bit about bogs. The display was an extension of the cooperative’s “Bogs Across America” marketing campaign.

And last year, Ocean Spray acquired a Chilean cranberry processing business, its first international expansion. Randy Papadellis, Ocean Spray president and CEO, said in a press release that the acquisition will help the company compete in the global dried fruit market. The acquisition also is geared at providing a “counter-seasonal” supply of cranberries expected to increase production by 12 million pounds a year for the cooperative’s cranberries, currently used in more than a thousand products in more than 50 countries.

Ocean Spray earlier this year also hosted a symposium on the health benefits of cranberries, including their use to treat urinary tract infections.

In addition, Soares said the Cranberry Marketing Committee is pushing to make cranberries a year-round fruit to increase demand beyond the fall, when most cranberries are eaten. If the committee has its way, cranberries will start showing up as meat marinades, in smoothies and other drinks, such as crantinis.

“We have to come up with a silver bullet product that the American consumer just can’t get enough of,” independent grower VanWychen said, “and we’ll be fine.”

UW-Madison School of Journalism and Mass Communication students Mary Sussman, Harriet Rowan and Michael Langlois contributed to this report, which began as a project in a reporting class taught by UW-Madison journalism professor Deborah Blum. The nonprofit Wisconsin Center for Investigative Journalism (www.WisconsinWatch.org) collaborates with Wisconsin Public Radio, Wisconsin Public Television, other news media and the UW-Madison School of Journalism and Mass Communication. All works created, published, posted or disseminated by the Center do not necessarily reflect the views or opinions of UW-Madison or any of its affiliates.