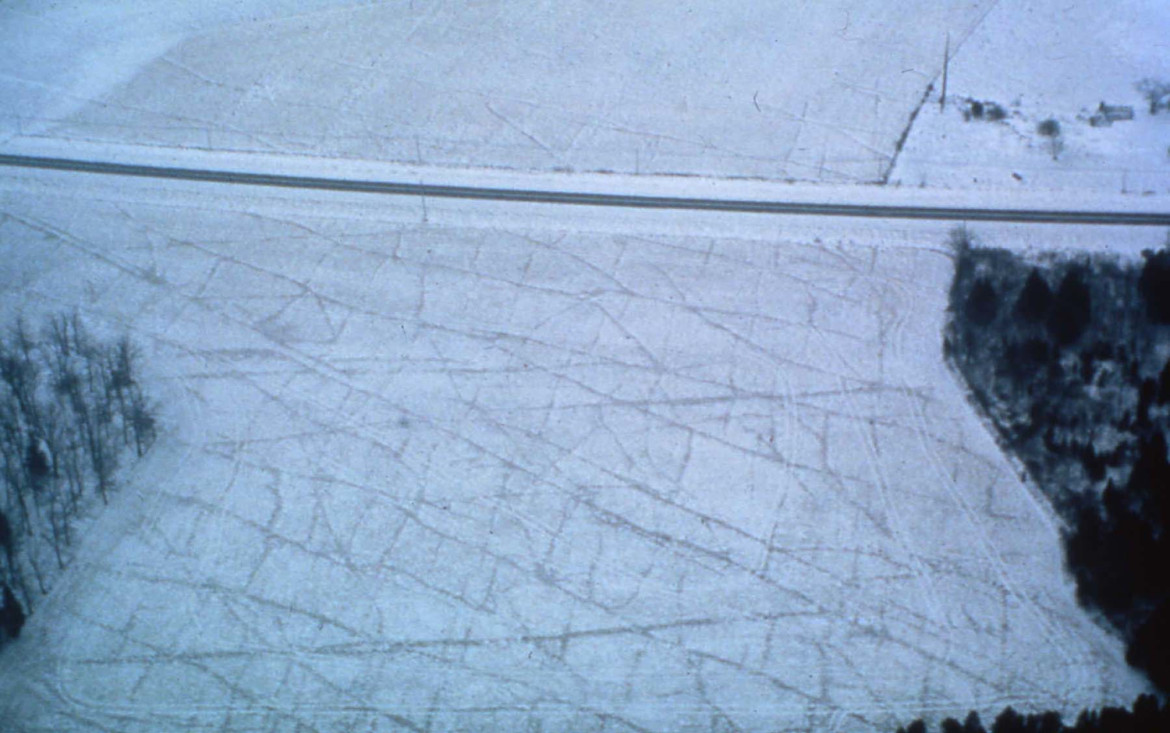 Crevices in this frozen Door County farm field illustrate the groundwater’s vulnerability. Water travels so fast through cracks in the bedrock that it gets to the aquifers before any pollutants in it can be filtered.

In an effort to prevent more taps from running brown, Kewaunee County officials are considering an ordinance that would ban waste spreading in winter and early spring on fields with shallow soil.

The proposal is facing opposition from powerful agricultural interests and questions about its legality. Some say the ordinance goes beyond state standards, which could make it subject to court challenge.

The proposal bans spreading of any waste — including manure, animal remains, human waste and other industrial byproducts — on areas with less than 20 feet of soil on top of bedrock. It would be in effect only between Jan. 1 and April 15, when contamination is most likely.

The ordinance’s path could be rocky. If the county board adopts the proposal at its Sept. 23 meeting, it will be put to a referendum in each town. And county conservationist Andy Wallander is bracing for challenges.

“I wrote this with the full intent that Dairy Business Association is going to come back and challenge it,” he said.

Wallander’s prediction may come true. John Holevoet, a lobbyist for the influential Dairy Business Association, questioned whether the law was based on sound science and whether Kewaunee County has the legal authority to do “everything that the ordinance contains.”

Thin soils over cracked karst bedrock: That is the geologic recipe that makes groundwater in  northeastern Wisconsin so vulnerable to contamination. Water on the surface seeps through the earth too fast to be filtered before it reaches the aquifer.

Thirty percent of the private wells countywide have tested as unsafe from bacteria or nitrates.

Contributors to contamination include human waste from septic systems, fertilizer and waste applied to cropland. About 500 million gallons of liquid manure are spread on Kewaunee fields each year, not counting other wastes, according to county records. Recent tests found potentially toxic salmonella in some homeowners’ wells.

Many in this area refer back to the 2007 Karst Task Force report, a 51-page study by scientists, farmers and other stakeholders that called for greater restrictions on land application and storage of waste to protect groundwater.

The report said spreading on soils up to 5 feet posed an “extreme” risk of contamination, from 5 to 15 feet “high” and from 15 to 50 feet a “significant” risk.

With the type of soil common in Kewaunee County, water could travel through 18 feet of soil in one to two days, said Maureen Muldoon, a University of Wisconsin-Oshkosh associate professor of hydrogeology.

“That’s just not enough time for the soil to filter out contaminants,” she said.

About 15 percent of the county would be covered by the 20-foot restriction, according to Wallander’s calculations. Not all of that is cropland. Earlier this month, Kewaunee County’s land and water conservation committee referred the ordinance to the full county board. A public hearing is scheduled for Sept. 9 in Luxemburg.

The committee is chaired by John Pagel, owner of Pagel’s Ponderosa Dairy and part-owner of Dairy Dreams in Kewaunee County. Those operations are among the biggest in the state. He is also a founding member of the Dairy Business Association.

Environmental advocates say they do not trust Pagel to safeguard the region’s resources. They point to his own runoff problems: The DNR issued Pagel a notice of violation at Dairy Dreams for alleged wastewater runoff violations earlier this year.

Some residents suggested Pagel, who voted to refer the ordinance, should recuse himself because his own operations could be affected by the new restrictions. But a county attorney wrote that Pagel could participate in the vote because he is one of many people who would be similarly affected — in the same way board supervisors with septic systems can vote on a sanitary ordinance.

At the meeting, Pagel acknowledged the area’s water pollution problems. He presented photos of manure pollution from farms and discussed what he had done to improve his own wastewater management.

“Andy (Wallander) and I both believe in the ordinance; I believe differently than Andy on how it should be structured and how we should move forward. … I think the whole committee believes that something is going to happen to improve the water quality in Kewaunee County,” Pagel said at the meeting.

Soil and water conservation committee meetings do not usually draw much of an audience. But county conservationist Wallander said the Aug. 12 meeting drew more than 60 people and was the best-attended meeting in 25 years. 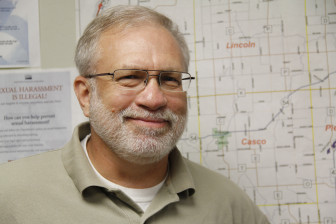 “Many of the contaminated wells already have 20-foot separation,” she said. “To me, 20 feet sounds like a compromise … we’re still going to have people sick.”

Town of Red River dairy farmer Chuck Kinnard said he agreed with speakers pushing for better groundwater protections but worried the ordinance would be too costly for small farmers.

“We don’t have the financial resources that the large farmers have,” Kinnard said. “An ordinance is a mandate, and if there’s a mandate there should be funding.”

Don Niles, who manages Dairy Dreams, said he wished the ordinance would take a more “intelligent” approach — like restricting farmers through the use of weather and soil conditions, rather than dates, and working on helping farmers improve their practices to protect groundwater.

But it is up to the county to decide whether state approval is needed, he added.

Kewaunee County officials instead wrote a different type of ordinance that does not require state approval. Instead, affected voters must approve the local law in a referendum.

Craig said that if the ordinance is passed and livestock operators affected by it believe it was improperly enacted, “that may be grounds for challenging the ordinance and taking action against the county.”

He added that Kewaunee County’s approach is “something that I haven’t seen regularly.”

John Petty, head of agricultural resource management for DATCP, said he would not comment on the legality of the ordinance or whether it required state approval because the county had not submitted it for official review.

Holevoet said the Dairy Business Association is concerned the idea could spread to other areas. The karst region includes parts of Brown, Calumet, Door, Manitowoc and Kewaunee counties, all of which are intensely farmed. 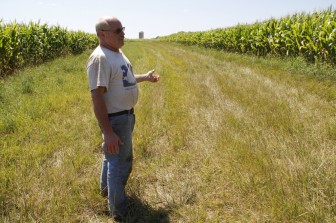 Kewaunee County dairy farmer Chuck Kinnard walks a grassed waterway on his land, built to keep runoff from contaminating groundwater, in July 2012. Like many farmers here, he is acutely aware of what a thin layer of soil protects the bedrock below.

Holevoet said the law could harm farmers if they cannot spread manure on the fields when they need to. He said the ordinance would have “serious adverse impacts on agriculture.”

Said Wallander: “This is not about big farming. This is about protecting our groundwater here.”

He said he hopes to get something done about the county’s drinking water problems before he retires in the fall.

“You can find a lot of stuff in groundwater that shouldn’t be there,” Wallander said. “Which points to the fact that we shouldn’t waste our time trying to study this over and over again to see who is at fault — we should put land use regulations on that will keep this from happening.”

This story has been corrected. The Dairy Business Association lobbyist is named John Holevoet, not Holevogt.