This isn’t your father’s Farm Bill. That’s the finding of “Growing Influence: Lobbying and the 2014 Farm Bill,” a three-day series on the nearly $1 trillion spending plan signed into law in February by President Barack Obama. 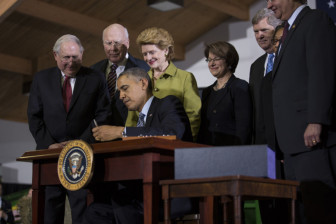 President Barack Obama signs the Agricultural Act of 2014 at Michigan State University in East Lansing, Michigan on Feb. 7. The President spoke on the importance of the act to America’s economy.

The bill, which will set national food and farm policy for the next decade, drew an estimated $500 million in lobbying by groups and companies ranging from large agri-business interests to nonprofits concerned about providing adequate food assistance to the poor.

Harvest Public Media and the Midwest Center for Investigative Reporting teamed up on the series exposing the powerful interests that weighed in as Congress debated the $956 billion spending plan. The media outlets created a searchable database of all of the Farm Bill-related lobbying.