Brett Hulsey arrives for an interview at a downtown Madison cafe and points to the loafers on his feet.

“The Associated Press accused me of running a shoestring campaign,” he announces with a gap-toothed grin, before setting the record straight. “I can’t afford shoestrings.” 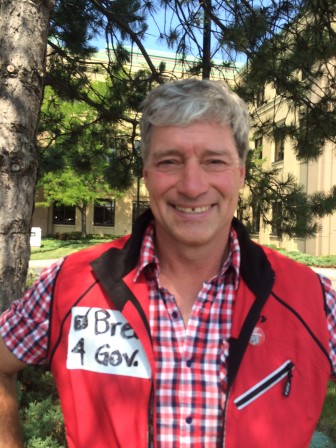 Hulsey, a state representative with a reputation for odd behavior, is quixotically seeking the Democratic nomination for governor in the Aug. 12 primary, against former state Commerce secretary and Trek Bicycle executive Mary Burke. The winner will face Republican incumbent Scott Walker this fall.

“I’m in it to win,” insists Hulsey, who is not seeking re-election to his Assembly seat, for which he faced in-party opposition. “I will be governor.”

Such proclamations from this dark-horse contender — whose campaign almost certainly cannot afford a horse — smack of delusion. Hulsey, who has reported raising less than $2,500, all but $288 from himself, is up against well-backed rivals who intend to spend millions. (Hulsey expects to raise and spend between $10,000 and $20,000 overall.)

Hulsey has further hurt his cause with such stunts as threatening to hand out KKK-style hoods at the state Republican convention. “He’s not a serious candidate,” said Dane County Democratic Party Chairman Mike Basford. Walker has called Hulsey’s candidacy “entertaining.”

The latest Marquette Law School poll, released July 23, found that fewer than 1 percent of respondents planned to vote for anyone other than Walker or Burke. Hulsey, in advance of this poll, thought he might get 10 percent.

Despite not being a viable candidate, Hulsey is mounting an earnest campaign, even working the cafe patrons, one of whom flatly declares, “I’m not voting for you.” An energy and environmental consultant who served 14 years on the Dane County Board and was elected to the state Assembly in 2010, Hulsey churns out frequent press releases on a wide range of topics.

Health care. Jobs. Green energy. Education. Natural resource preservation. Hulsey is not a nincompoop; he understands the issues and has ideas on what to do. Whether these are good ideas is open to debate.

Hulsey, who bills himself in his campaign literature as the “real Democrat” in the race, says Burke does not have what it takes to win: “She’s not strong, she’s not quick, she’s not smart.” He sees her record at Trek, which has outsourced jobs to China, as a liability.

“By the time Walker and the Republicans are done with her, you will think every job that was lost in Wisconsin was because Mary Burke personally sent it to China,” Hulsey says.

In fact, as Burke and others have pointed out, Trek is a highly successful company that employs nearly 1,000 state residents. Walker’s decision to call negative attention to Trek is seen as risky and has come under fire.

Hulsey rips Burke’s support for making public employees pay more toward their health care and pension costs. He vows to “immediately” restore these benefits, saying these were fairly negotiated over decades in lieu of pay increases.

Hulsey says all this can be done without tax hikes by tapping into the $2 billion he calculates Walker is passing up in available federal funds through 2021, mostly in Medicaid assistance.

Burke spokesman Joe Zepecki declines comment on Hulsey: “We’re focused on November, and Scott Walker, as we have been all along.” Hulsey is not stingy when it comes to offering his two cents to Burke’s campaign.

“Don’t be Scott Walker lite,” he advises. “Give people a real choice. Stand up and fight.”

And what, pray tell, will Hulsey do if — make that when — Burke emerges as the Democratic nominee? “I will endorse her and I will do all I can to beat Scott Walker.”

One thought on “Hulsey campaign a losing proposition”