BLUE RIVER — The day before a reporter came to visit, Peg Swan received six letters from Wisconsin prison inmates. Some days she gets more than that. “Three is few,” she said.

Swan, 66, a retired nurse’s aide, lives in rural Richland County with her husband, Ron Solinger. The couple shares a small, cluttered house they built themselves, starting in 1977. It has no TV or Internet access. She makes the 12-mile drive to the Richland Center library to use the wireless connection there, as often as she can.

She writes inmates back and helps in small ways, like sending them stamps. She also produces a quarterly newsletter. Her nonprofit group, Forum for Understanding Prisons, is mainly self-funded.

“I get $286 of Social Security a month and this is what I spend it on,” Swan said. Her husband, a self-employed piano tuner, pays the bills. “We don’t spend much money.”

The group’s headquarters is a tiny room that doubles as a closet, adjacent to the couple’s bedroom. She sits at a folding chair. The light bulbs are bare. Plastic horses compete for available shelf space. Boxes of files are stacked against the walls.

Swan has long been drawn to advocacy work. In the early 1980s, she opposed U.S. policy in Nicaragua. In the late 1980s, she sounded an alarm about climate change, until she realized that people “were not going to change lifestyles.” 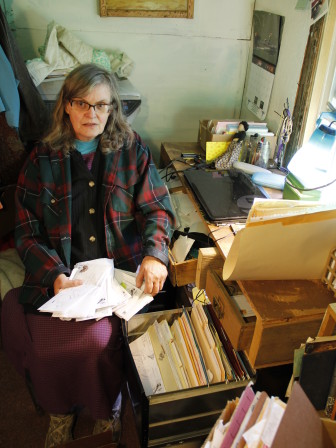 In 1999, the state opened a super-maximum security prison in Boscobel, not far from where she lives. Swan, who as a volunteer for Amnesty International wrote letters protesting the use of solitary confinement, was appalled to discover “that’s what we were doing here.” She began reaching out to inmates there. Soon Swan was getting letters from all over the state.

Kate Edwards, an ordained Buddhist reverend who works on prison issues, said Swan has “carried the torch in an incredibly persistent, committed and dedicated way,” and makes a real difference to prisoners across Wisconsin. “They really consider Peg to be a lifeline.”

Swan agrees what she does matters to prisoners, even as she considers her efforts at prison reform “mostly ineffective.” She calls the inmates who write her “my brothers” and is surprised how hard it is to get others to care. “These guys don’t stop being human,” she said.

In early 2013, Swan began hearing from inmates at Waupun Correctional Institution about abuse by guards in the segregation unit. She has since received dozens of letters.

“This is Waupun,” she said, opening a file cabinet. “And that box is Waupun.”

The allegations, she said, are strikingly similar: Inmates say they are beaten by guards yelling “Stop resisting,” then blamed for starting it.

“Enough people are coming forward that we have a pattern,” she said. “We don’t have a pattern at other prisons.” She believes the inmates, because of the level of honesty in their letters: “They bare their souls.”

“I will keep trying until this problem at Waupun is looked at,” she said.

One thought on “Advocate devotes life to aiding Wisconsin’s prisoners”