It’s the kind of report that probably ends up in more recycling bins than reading piles. Released in May, “Tenure, Turnover and Reelection in the Wisconsin Legislature, 1940-2012,” a 32-page bulletin from the Legislative Reference Bureau, lives up to its non-scintillating title, and was received accordingly.

A Republican state senator posted a link on her blog. A radio reporter, in a tweet, called it “interesting.” That was about it, in terms of public reaction.

Significantly, in all three areas under review — tenure, turnover and reelection — the trends of the past several decades have not held true in the most recent elections.

Take tenure. Legislative longevity roughly doubled from pre-1960 levels in both chambers, topping an average of more than five sessions per senator in 2009 and four sessions per Assembly representative in 2003. (Senators serve four-year terms, or two sessions; Assembly reps are elected every two years.)

But in the 99-member Assembly, this average dropped to 2.4 sessions in 2013, the lowest since 1975. In the 33-member Senate, the average dipped in 2011, when eight new senators were inaugurated; it will drop again in 2015, following a fall election in which seven incumbents, including several veterans, are not seeking election. 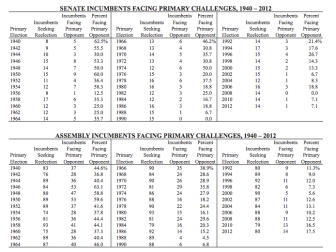 Tables from the report.

In the upcoming Aug. 12 primary, only four legislative incumbents in both houses face in-party challengers. (There will be two dozen legislative primaries in all, most in districts with open seats.)

But even with fewer primary challenges, turnover is on the rebound, after decades of decline. In the 1940s, the Assembly welcomed an average of more than 36 new members each session. By the 2000s, that average fell to 15. But the 2011 election had 30 freshmen, the most since 1983; there were 25 new faces in 2013, and there are 22 open seats this fall.

In the Senate, where 16 or 17 districts hold elections each cycle, the number of new members averaged more than nine in the 1940s; by the 1990s, this had fallen to 2.4. But the average rebounded to more than four in the 2000s, and in 2011 the Senate welcomed eight new senators, the most since 1963. This fall’s elections, with seven open seats, could equal or top that.

One factor for the recent rise in turnover is the growing number of lawmakers who don’t seek reelection. This is especially true in the Assembly, where from 1990 to 2008 an average of 87 incumbents sought reelection. The total was 79 in 2010, 80 in 2012 and will be 77 this year.

Another factor: Getting re-elected is no longer as automatic. In the Senate, the success rate of senators seeking reelection topped 90 percent in the 1980s and 1990s and stood at 86 percent in the 2000s. This fell to 79 percent in 2010 and 2012 combined.

The success rate for Assembly reps seeking reelection, which averaged an astonishing 96 percent in the 1990s and 2000s, has also declined in the last two elections.

Keane’s analysis examines incumbency, not party affiliation. It notes in passing that, during the period under review, Wisconsin has seen “a veritable revolution in election law, redistricting and campaign finance.”

An analysis of those factors is also needed for anyone trying to grasp not only what has happened over time in state legislative elections, but why.