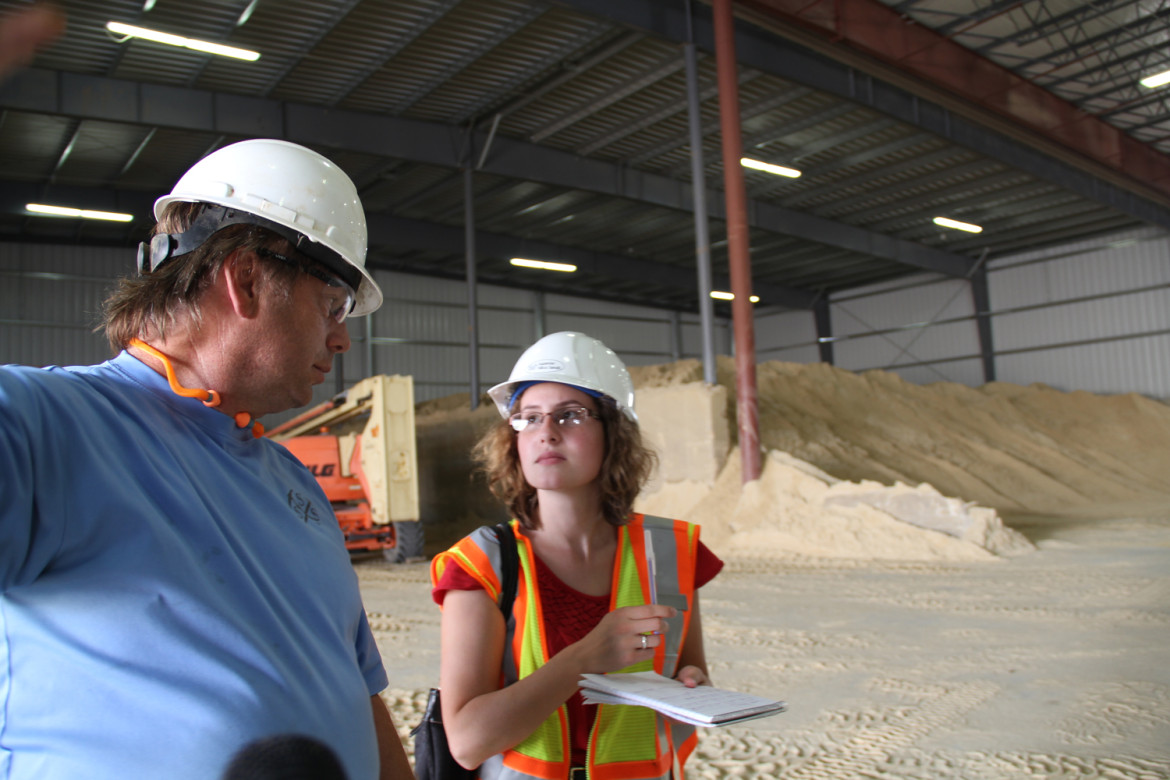 Reporter Alison Dirr just finished a yearlong internship with us, during which she covered the sprawling beat of Wisconsin’s fast-growing frac sand industry. We talk about that in the latest podcast. And below the audio link, further reflections from Dirr.

Also, we now have music for the podcast.

Alison Dirr: After a year as WisconsinWatch’s frac sand beat reporter, I’m leaving with a real appreciation of the complexity and nuance of this controversy.

The Wisconsin Center for Investigative Journalism reported in June 2011 that there were at least 16 operating frac sand mines and processing plants with an additional 25 sites proposed. In the latest update in May of this year, the Center found 125 permitted or operational facilities with an additional 16 proposed. A number of facilities were removed from the map, as well.

The number of facilities did not grow substantially in the time I was at the Center, but controversies continue to rumble across the state’s frac sand region.

On its face, it looks like simply an environmental issue. That was my impression when I first started reporting. But I learned it is also a jobs issue. A quality of life issue. An economic issue. A health issue. A political issue. A property rights issue. And, most fundamentally, a community issue.

These many elements come up in the debates over frac sand mining in the communities where the facilities (want to) locate. It’s what makes reporting messy and delicate and fun.

Over the past year, I talked with residents, activists, industry reps and politicians in western Wisconsin communities. I toured a few of these huge industrial facilities with company representatives who were proud of the work they were doing. I heard from residents concerned that nearby hills would be leveled, the air polluted, their properties rendered worthless by a nearby mine. And I found other residents — in some cases neighbors of those voicing concerns — who were not worried at all.

I came away realizing the importance of talking to as many people as possible — not just those who speak the most or the loudest. And I found that how residents view frac sand mining very much depends on their personal circumstances. For instance, one gas station owner opposed a new mine because it was close to the school her children attended. The mayor of that same city supported the mine, saying the facility would bring jobs and help the community financially.

So who is right?

Much of the time, reporting on this controversy meant searching for elusive answers — and for experts who had not already taken a side. This was especially true on the first story I worked on that explored residents’ concerns that dust from nearby mines could cause health problems.

Respirable crystalline silica — the type of dust — has been linked in workplace settings to serious health problems. But there was not nearly as much information about its effects on people living nearby. It was a complex story to report, because one side said there was very little to be concerned about while the other argued the issue was extremely important.

As the industry continues to evolve, such complexities will continue to shape how residents, and ultimately, reporters, view frac sand mining’s impact on lives and communities.