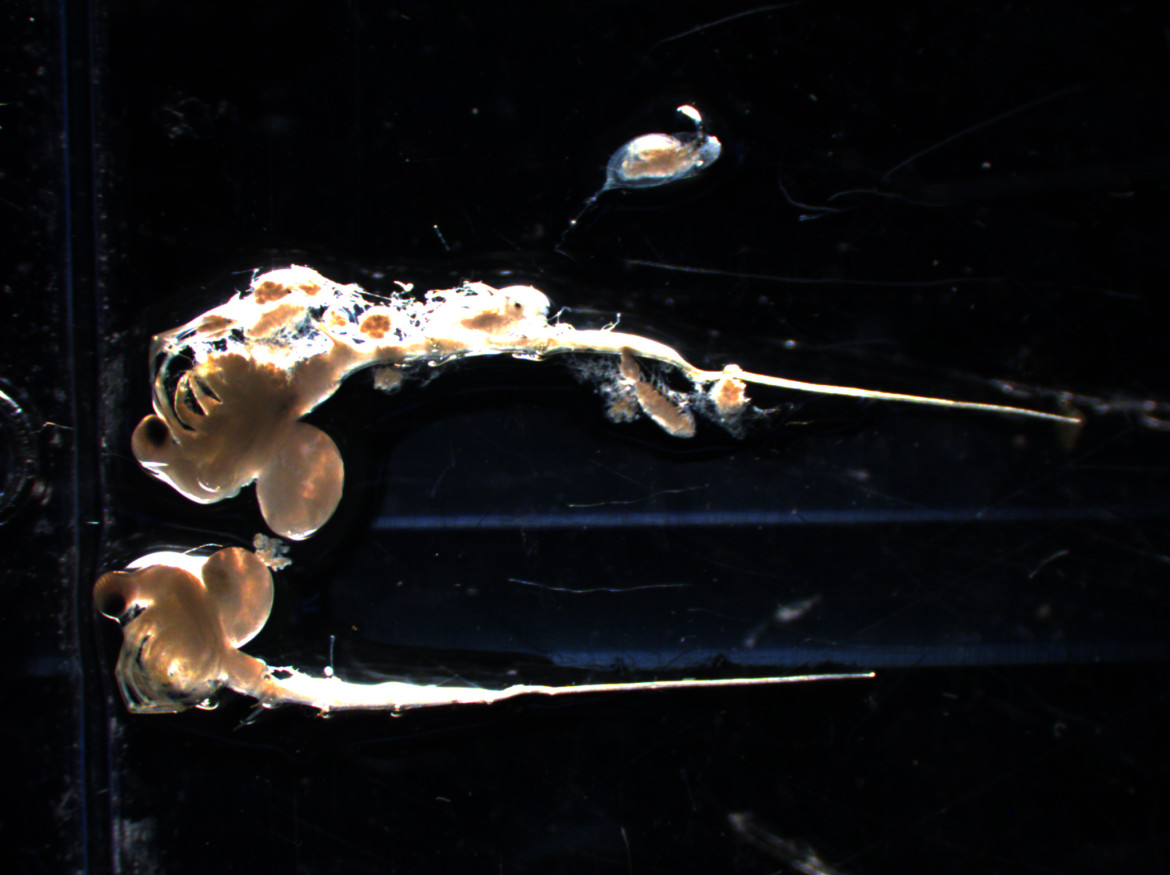 The long spines of spiny waterfleas catch on fishermen’s lines and puncture the guts of small fish that try to eat them.

The Capital Times and Wisconsin Center for Investigative Journalism collaborated on this four-part series to examine threats to the quality of the Madison area’s spectacular lakes, and ambitious new efforts that seek to improve them. Researchers around the world are watching our lakes in hopes of adapting these lessons to troubled bodies of water in other areas.

LAKE MENDOTA — Tiny crustaceans in Lake Mendota are distant cousins of sea monkeys — but they are more like the cattle of the lake.

These creatures, Daphnia, improve the quality of the water as they graze on the algae that bedevils lake users and managers.

On a boat in the middle of the lake, University of Madison-Wisconsin researcher Steve Carpenter holds up a jar of Daphnia and marvels at their power: “Those little animals in the jar are about the only thing that’s keeping a lid on the algae.”

But the Daphnia and their good works are in danger. Each year their population is now crashing in the late summer as they are decimated by a voracious new predator called the spiny waterflea.

And when the population drops, the water quality does, too.

This invasive species, originally from Eurasia, got a lift to Lake Mendota, most likely on a recreational boat from Lake Michigan. They got settled — and fundamentally changed the food web in Lake Mendota.

For decades, too much phosphorus has flowed into the lake; currently, it’s mostly from manure runoff and erosion of fertilizer-rich soils, with additions from urban stormwater and other sources. Phosphorus makes the algae bloom — both the kind that makes water hazy and green, as well the kind that produces gloppy surface scums. The algae are not only annoying but potentially toxic.

Experts agree that in cleaning up the Yahara lakes, job one is reducing the phosphorus load by a massive amount. The plan to do so will cost millions of dollars and is not guaranteed to succeed.

While promising new cleanup plans are afoot, lake data show that so far the years of efforts have not resulted in a noticeable improvement in lake water quality. Climate change likely played a role; heavy rainfalls, which wash pollution into the lakes, have become more common. 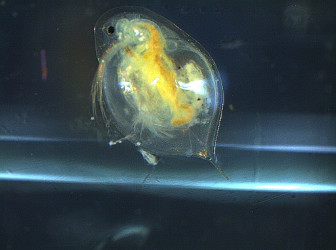 Pollution feeds algae in Lake Mendota, and then these invertebrates called Daphnia feed on the algae, clearing up the water. But now the Daphnia are being eaten by spiny waterfleas, a new invasive species. Courtesy of Jake Walsh/University of Wisconsin-Madison

Lake managers already know they have to redouble their efforts.

The spiny waterflea is making that job even harder.

Jake Vander Zanden, UW-Madison professor at the Center for Limnology, said it “undoes a lot of the work that went into keeping phosphorus down.”

It was late summer, 2009, when Vander Zanden discovered the spiny waterflea, out in a boat on a routine field trip with undergraduate students of limnology, the study of lakes.

The students took a conical net and dipped it into the water to see which invertebrates it would catch.

It came up teeming with spiny waterfleas.

“I freaked out,” Vander Zanden said. “I used language that would be considered coarse. This was a lake I felt would never be invaded by spiny waterfleas.”

Until then, he knew, spiny waterfleas were known to like clear, deep, cold lakes, like some in Canada.

Vander Zanden’s first thought was: “What will these things do to the ecosystem?”

Since then, he and Jake Walsh, a doctoral student who arrived around when the spiny waterflea did, have been studying the waterflea’s effects on the populations and water quality of the lake.

Their findings are bad news.

Daphnia have been particularly abundant since the Wisconsin Department of Natural Resources stocked the lake in 1987 with a massive amount of walleye and northern pike. They ate the smaller fish that preyed on Daphnia. That single experiment in manipulating the food web hugely improved the lake’s water quality.

Now, Vander Zanden and company have found Lake Mendota to have the highest densities of spiny waterfleas ever seen in the world.

The waterflea population is perhaps in the hundreds of billions, ramping up in late summer and peaking in fall. That is also why the water has gotten cloudier since 2009.

Carpenter and coauthor Richard Lathrop, a DNR scientist, found that for a given amount of phosphorus, the water quality is worse when Daphnia are not around to eat the algae.

Walsh likens the waterflea to a velociraptor. The waterflea pounces on Daphnia and shreds it to pieces.

To the waterflea, the Daphnia is “like a nice, slow-moving piece of steak,” Walsh says.

They are nasty even as prey, puncturing the guts of and even killing hapless little fish that try to eat them.

Fishermen may have noticed the spiny waterflea, because the spines can catch on their fishing gear and clog them up.

But beach users may not notice this drama playing out in the middle of the lake.

That is because even though algae-clogged beaches and green, hazy lake water are symptoms of the same problem — too much phosphorus — on any given day the shoreline conditions may vary from the middle.

Lathrop, who is now retired and has an honorary position at the Center for Limnology, said beaches may have actually been better off as a result of the waterflea. When Daphnia are not around to eat the small algae that makes water green, that type flourishes instead of the large stuff that causes scums.

That does not make the waterflea a good thing, he said. The hazy green small algae can produce toxins just as the scum-producing kind can.

And now the spiny waterfleas of Lake Mendota can head to other area lakes.

Right now, six or maybe seven of Wisconsin’s 16,000-plus lakes are known to harbor the waterflea.

That includes the Madison-area Yahara chain lakes Mendota, Monona, Waubesa and Kegonsa. They may just be getting washed downstream to the second two, rather than living there, and they have not been found in Lake Wingra. Up north, waterfleas have invaded the recreational lakes Stormy Lake, the Gile Flowage and possibly Star Lake.

But as of now, experts have no tools for eradicating the spiny waterflea, according to Vander Zanden.

This series, Murky Waters, was produced collaboratively by The Capital Times and Wisconsin Center for Investigative Journalism. It is part of Water Watch Wisconsin, a project supported by The Joyce Foundation that is examining water quality and supply issues statewide.