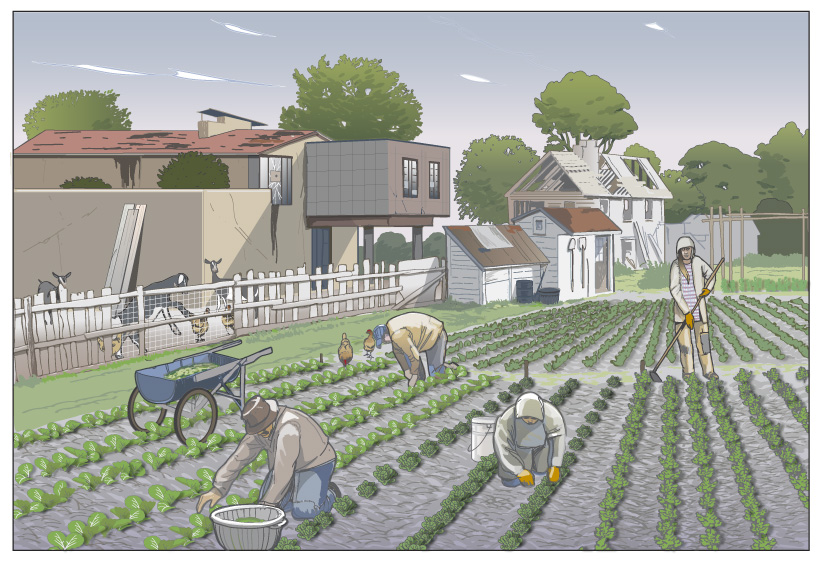 In one scenario, the researchers envision a toxic algae driving off or killing nine-tenths of the Madison area. Those who remain in 2070 live simple lives focused on survival.

Will it take a disaster to respond to climate change?

A group of University of Wisconsin-Madison researchers on Wednesday released a series of detailed science-based scenarios envisioning life in 2070 in the Madison area’s Yahara Watershed, aiming to help people envision the effects of climate change before it worsens.

The four scenarios of Yahara 2070 were based on about 150 interviews with local stakeholders, including policymakers and advocates, about their hopes, fears and expectations of what could happen over the next half-century in the nearly 400-square-mile region.

The scenarios are based on a range of climate change possibilities agreed upon by the United Nations-convened Intergovernmental Panel on Climate Change. Researchers on the hard-science side of the project are collecting and crunching data on land use, water quality and other current conditions, feeding models that simulate how nature might react to changes in climate and land use.

But the scenarios go beyond science. They are “science fiction,” said co-principal investigator Chris Kucharik, a lead researcher who is an associate professor of agronomy at UW-Madison.

That is by design. 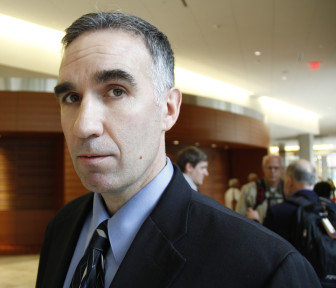 “We want to encourage long-term thinking,” said Chris Kucharik, a lead researcher on the Water Sustainability Climate project, which produced scenarios of what life could be like in 2070 in the Madison-area Yahara watershed. Kate Golden/Wisconsin Center for Investigative Journalism

They are supposed to hover at what another co-principal investigator, Center for Limnology director Steve Carpenter, calls “the edge of plausibility.”

Written by science writer Jenny Seifert, the scenarios are stories with characters and vivid details, like elephants roaming a newly arid Wisconsin, or robots that work the land and text farmers when the harvest is done. The researchers even hired a local artist, John Miller, to illustrate the stories.

Melissa Malott, an executive assistant to Dane County executive Joe Parisi who focuses on environmental issues, said on a panel at the scenarios’ launch that they could be important in helping people engage and think creatively about the future.

“What do we have to do to set ourselves up for the future we want?” she said.

The scenarios are part of a five-year, $5 million project funded by the National Science Foundation to understand the interactions between water, climate, land use, infrastructure, and ecosystems.

The watershed’s current pollution problems play heavily in the scenarios.

Climate change has brought more heavy rains in the last decade; they wash nutrient-rich manure and fertilizer into the lakes. About 80 percent of the phosphorus running into the lakes comes from agriculture; urban runoff also plays a role. The nutrients feed blue-green algae, which often forms toxic scums.

In one severe scenario, people fall short in preparing for climate change. Agricultural phosphorus pollution feeds a new form of algae that can release toxic vapors into the air; it kills or drives off nine-tenths of the population.

The federal government is too busy dealing with environmental disasters on the coasts to help the Yahara Watershed, and many of those who return or stay are back-to-the-landers, frontier types — but the low population also helps the land recover.

In a second scenario, heavy federal investment in green tech, biotech and high tech transforms Dane County into a tech powerhouse. The population doubles, and people come to believe they can engineer their way out of any ecological problem.

A third story envisions young people invoking a major shift in values toward community, sustainability and lower consumption. Air travel becomes a lot more expensive, as does food. But people also get out of the rat race and have more time to spend with each other.

In a fourth future, the nation’s government, responding to a major freshwater shortage induced by climate change, reorganizes on watershed boundaries. The Midwest must export water to water-scarce areas, and enacts strict regulations to conserve water.

Each scenario has its pros and cons. Even in the abandonment scenario, people are excited about rebuilding and connecting to the land.

The researchers designed the project to build on past scenario-building exercises, Carpenter said. The concept dates back to the Cold War, during which the RAND Corporation, a nonprofit think tank that was the product of the U.S. Air Force and Douglas Aircraft, devised scenarios to help military planners consider “the unthinkable,” as an early scenario guru put it.

Since then dozens of regional scenario projects have arisen, but few have contemplated change on the scale of a single watershed, according to Carpenter. The Yahara project is also unique for “the incredible amount of data,” Carpenter said.

Don Heilman, president of the Clean Lakes Alliance, a business-funded nonprofit that aims at fixing the polluted Yahara Watershed lakes, said he was “jazzed” by the scenario envisioning greater innovation, “from the test tube to the farm,” that could solve ecological problems like phosphorus pollution from agriculture.

Farmers, Heilman said, have been given better technology to produce milk or crops, but few new ways to deal with manure aside from biodigesters, which are still being tweaked.

“They need a solution for manure,” he said. “And we need to be able to come up with that in order to have the lakes survive agriculture as it is right now.”

Malott said the Yahara area is in “a really unique situation” because it is ahead of the game in trying new ways to approach cleaning up phosphorus pollution.

“We do have the power to shape what’s happening at the local level and set a model for the rest of the country,” she said.

Cal DeWitt, an emeritus professor at the UW-Madison Nelson Institute for Environmental Studies, said the project reminded him of how his town of Dunn, in the southern part of the Yahara Watershed, came up with a dozen key values in the 1970s that it codified in long-term plans.

The buzz back then was “environmental degradation,” not climate change, he said. But the questions that prompted the long-term planning were similar: “Who have we been? Who are we now? What will we become?”

“We decided to control our future, instead of letting it happen,” he said.

This story is part of Water Watch Wisconsin, a project supported by The Joyce Foundation that is examining water quality and supply issues statewide. The nonprofit Wisconsin Center for Investigative Journalism (www.WisconsinWatch.org) collaborates with Wisconsin Public Radio, Wisconsin Public Television, other news media and the UW-Madison School of Journalism and Mass Communication. All works created, published, posted or disseminated by the Center do not necessarily reflect the views or opinions of UW-Madison or any of its affiliates.