There were, into the month of May, no signs in the front windows of Mary Burke’s campaign office across the street from the state Capitol in Madison, nothing to broadcast her name to the many people passing by.

That’s an odd missed opportunity for a candidate struggling to make herself known. A Marquette Law School poll in March found that an astonishing 59 percent of respondents did not have either a favorable or unfavorable impression of Burke. (A subsequent “Democratic-leaning” poll said seven in 10 respondents had an opinion of her, evenly divided.)

In modern political campaigns, shaping these impressions often hinges on money. And Burke, despite her personal wealth from family business Trek Bicycle, where she was an executive, is not likely to match the financial firepower of the incumbent, Gov. Scott Walker. In the 2012 recall election, Walker’s campaign spent $36 million.

“I am trying to raise enough money to get my message out,” Burke says in a recent interview at her inconspicuous headquarters. She vows to be deliberate in doing this “because I do expect unfortunately that I will be greatly outspent.” (See video excerpts from the interview below.) 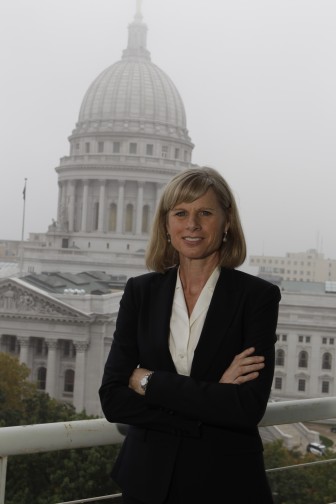 Mary Burke: “I am trying to raise enough money to get my message out.”

Burke, a Madison School Board member and former state Commerce Department secretary, is the clear front-runner among four Democrats vying to take on Walker this fall. Her personal wealth is seen as a key asset to her campaign. But part of her game plan is to impugn Walker’s support.

“I do point out how much money he raises from outside interests,” Burke says. “I think it strikes the people of Wisconsin as wrong. And it should.”

In the recall election and afterward, more than half of Walker’s money has come from people who live in other states. And that doesn’t include outside groups like the Republican Governors Association, which has already dropped $2 million on ads attacking Burke, and booked another $2 million in ads for this fall.

Burke sees such support as toxic, saying it comes from people with a narrow political agenda that’s out of step with Wisconsin values. She brands Walker a Tea Party conservative and political extremist.

Asked about these specific allegations, Walker campaign spokeswoman Alleigh Marre offers general remarks: “Under Gov. Walker’s leadership, Wisconsin has created over 100,000 jobs and nearly 17,000 new businesses, turned a $3.6 billion deficit into a $911 million surplus, and cut taxes by $2 billion. Wisconsin is moving in the right direction.”

Burke, who declared her candidacy in October, raised $1.8 million through Dec. 31, including $430,000 in self-contributions. During this same three-month period, Walker raked in $3.6 million, 52 percent from out of state.

Mary Burke from WisconsinWatch on Vimeo.

About $224,000 of Burke’s reported contributions — 12 percent — came from other states. Burke says some of this comes from relatives and long-term friends and vows that, overall, “the vast majority of my money will be from inside the state.”

In fact, she would like to ban out-of-state contributions: “When you look at U.S. elections, we don’t let any foreign money play a role, so I don’t see why we should have out-of-state money coming into a gubernatorial race.” She even favors limits on “self-funders,” as part of comprehensive reform. Both ideas would face constitutional challenges.

“I would certainly look at all possible options,” Burke says, acknowledging that any solutions would have to hold up in court. The current system, she says, is just not working: “Money plays too big a role in terms of our elections and as governor I would work to reduce that impact.”

But first she has to get elected, under the current system.