Lake Kegonsa has the worst water quality in the Yahara chain of lakes. Pictured is the lake's small beach at La Follette County Park in Stoughton. 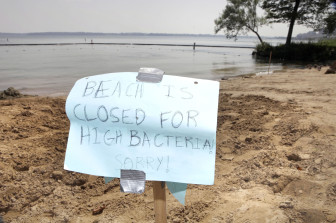 This is the fourth and final installment of “Murky Waters,” a collaborative reporting project by The Capital Times and Wisconsin Center for Investigative Journalism. The series examines threats to the quality of the Madison area’s spectacular lakes, and ambitious new efforts that seek to improve them. Researchers around the world are watching our lakes in hopes of adapting these lessons to troubled bodies of water in other areas. The series was published on four consecutive Wednesdays, starting April 23, 2014. 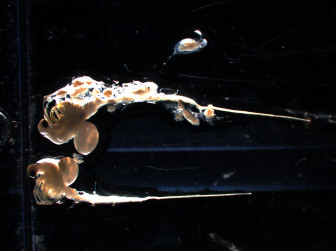 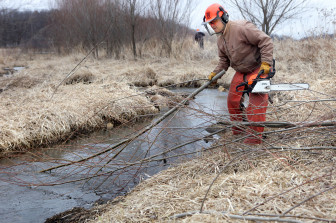 All lakes are not created equal. And in the Madison area’s Yahara chain, Lake Kegonsa is the redheaded steplake.

Watershed managers and scientists from Green Bay to Japan are watching Madison’s current efforts to clean up its algae-beset chain of lakes — Mendota; Monona, and its contributor, Wingra; Waubesa; and Kegonsa, in order of drainage.

“What’s going on in our watershed is actually cutting-edge,” said Steve Carpenter, director of the Center for Limnology at the University of Wisconsin-Madison. “If we can do it here, then our portfolio of tools can be exported. It is a laboratory for innovation.”

The plan for the lakes is to starve the algae and clear up the water. Led by the nonprofit Clean Lakes Alliance and involving many watershed players, the plan aims to halve the phosphorus running into each of the four main lakes.

Equally ambitious is the Madison Metropolitan Sewerage District’s attempt, now in pilot stage, to pay farmers to reduce their pollution to the watershed, an alternative to the costly task of upgrading its own treatment plant’s pollution controls.

In these experiments, Kegonsa — carp-filled, green, scum-susceptible — is one of the biggest challenges.

The fact is, some lakes are harder to clean up than others.

“Kegonsa is a sad story, and I wish I could think of something more positive to say about it,” Carpenter said. “It has been the end of the line for phosphorus runoff for a long time. Phosphorus levels are very high.”

Carpenter and Richard Lathrop, a retired longtime Wisconsin Department of Natural Resources lake researcher, recently published research comparing management options for the watershed, based on the characteristics of the lakes and their surroundings. Where, they asked, might pollution reductions give the greatest bang for the buck?

That would be at Lake Mendota, at the top of the chain.

Kegonsa, they concluded, “can be expected to exhibit muted responses to management.”

For Kegonsa resort owner Tom DuFoe, that prognosis is akin to hearing that a good friend has a serious illness. He has operated Kegonsa Cove Resort off County Highway AB on the lake’s North shore for three years. He has watched in dismay as the weeds have become worse and worse.

“They have a couple of machines that they use to cut the weeds,” DuFoe said, “but they don’t do it as often as it seems they should. It’s progressively getting worse. Customers complain about the weeds, especially them getting tangled in the propellers and that kind of thing.”

Still, business has remained steady at the resort. Customers rent fishing boats, pontoons and canoes, and the bar and grill are busy. Kegonsa has much to offer, DuFoe said, which makes it all the sadder that lake experts are finding it difficult to address the lake’s weed problems. DuFoe said the lake is the least crowded of all the Madison lakes and the fishing can be excellent, even with the weeds. It’s one of the lakes where you can paddle or motor out and get away from crowds and speedboats towing skiers, he added.

“I love this lake,” DuFoe said.

Why Kegonsa is unlucky

Lake Kegonsa has the worst water quality in the Yahara chain.

At the end of the lake chain, it receives phosphorus from all the other lakes. About three-quarters of the phosphorus in Lake Kegonsa comes from upstream. The rest comes largely from agriculture. 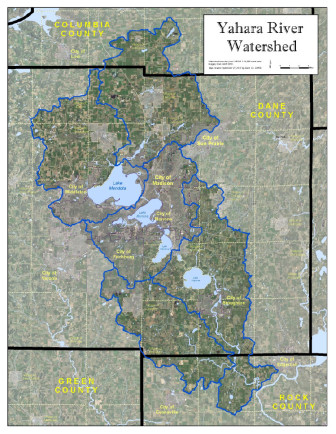 Lake Kegonsa, at the end of the Yahara chain, gets three-quarters of its phosphorus from the upstream lakes. It “can be expected to exhibit muted responses to management,” scientists Steve Carpenter and Richard Lathrop wrote. Brandon Raygo/The Capital Times

Because it is a shallow, round bowl, the wind mixes it up easily, kicking up phosphorus from the sediments.

Its numerous carp also stir up these phosphorus-rich sediments.

And Kegonsa has a lot of phosphorus coming into it. At this point it has so much, in fact, that the algae cannot use it all — meaning that up to a point, “you could cut it and nothing would happen,” Lathrop said.

Carpenter and Lathrop’s research suggests that the Clean Lakes Alliance plan is “aggressive but feasible” overall. But clear water will be more difficult to achieve at Lake Kegonsa, because so much of its pollution comes from upstream.

Even if the plan were achieved to the letter, Kegonsa probably would not clear up as much as the other lakes, Lathrop said.

“But it doesn’t mean we shouldn’t try,” he added.

James Tye, Clean Lakes Alliance vice president, said it was important to address the worst runoff going directly into Lake Kegonsa because “if you don’t do anything, it’s also going to get all the bad stuff coming from other lakes,” he said.

“The properties around Lake Kegonsa need to be much more diligent about sediment getting into the lakes,” he said.

There are new efforts. Tye pointed to a Clean Lakes Alliance-coordinated project completed last fall in which a farmer whose land was streaming manure runoff down to the water was persuaded to add a pond where the runoff could safely collect.

Peter Foy, president of the Friends of Lake Kegonsa, a nonprofit group of about 320 lake homeowners, had driven around earlier that year to systematically identify where runoff was heading to the lake and sample what was in the water. For a while it seemed the project was floundering. 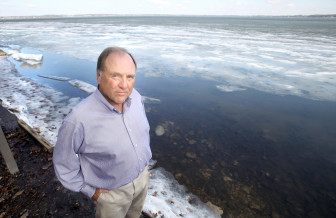 Peter Foy, president of the Friends of Lake Kegonsa, says "when we have algae blooms out there, that is the worst thing. You can't even let your dogs go in there. We don't get concerned if the water's a little green." Mike DeVries/The Capital Times

“But I’ll be darned,” he said. “Before the ground froze, that project was finished.”

He believes people are just now starting to buy into the need for a phosphorus cleanup.

Carpenter’s suggestion: “Perhaps we should be thinking long-term about a fairly drastic intervention in Kegonsa.”

Eradicating the carp, for example, could help. Or treating the lake with alum, a chemical that settles out phosphorus; it has long been used by wastewater treatment plants but is infrequently used in Wisconsin.

“These, or other options, are massive and expensive ecosystem engineering that would require careful planning and public consideration,” Carpenter said. “But after analysis they might look good compared to the alternative, which is a massively polluted algae bowl for many decades, and a big source of phosphorus to the lower Yahara and Rock River.”

Lathrop’s take on Kegonsa is that “expectations have to be realistic.” For Lake Mendota, clear water would mean being able to see three meters. For Kegonsa, people would be pleased with seeing beyond a meter, he added.

“We have to learn by doing, and see what we can get,” he said. “There’s hope. Even for Kegonsa.”

“Anybody that lives on the lake will tell you it’s a beautiful place to live, constantly changing,” said Foy, the lake homeowner.

“But when we have algae blooms out there, that is the worst thing. You can’t even let your dogs go in there. We don’t get concerned if the water’s a little green.”