In February, the state’s Wolf Advisory Committee took a surprising stand against a controversial state program that compensates the owners of dogs killed by wolves while hunting other animals.

The committee, made up of Wisconsin Department of Natural Resources staff and representatives of stakeholder groups, voted 9-8 to recommend discontinuing these payments, which no other state provides.

In January, the Wisconsin Center for Investigative Journalism reported that the payments, usually $2,500 per slain dog, have gone to hunting law violators, repeat claimants and residents of other states. A record $56,000 was paid out for 2013.

At the February meeting, committee member Al Lobner, president of the Wisconsin Bear Hunters Association, opposed ending the payments. Attendee Melanie Weberg, a semi-retired teacher, says Lobner warned the group, according to her notes, “This is not a threat; be careful of what you do or this could get ugly.” She considered it a threat.

At the committee’s next meeting, in late April, DNR administrator Kurt Thiede told members they should not be making recommendations that require statutory changes, like ending these payments.

Jodi Habush Sinykin, an attorney for a coalition of groups suing the state over the use of dogs to hunt wolves (also something no other state allows), suspects Lobner brought his concerns to DNR higher-ups, who then acted to rein the committee in.

Lobner declines comment on this scenario, except to say, “We get a lot of credit for a lot of things we don’t do.” Thiede says representatives of the Bear Hunters and others did contact him after the February meeting but that “none of these contacts led to the clarification that I provided.” The DNR, he adds, “will not be advocating for the statutory changes suggested by the wolf committee.”

Some critics of Wisconsin’s wolf management policies see this as a small example of the enormous clout of pro-hunting groups. They also feel the committee, despite its narrow vote against these payments to hunters, is heavily weighted in favor of pro-hunting interests. And they are upset that the DNR this year ended its practice of holding an open meeting to arrive at wolf population numbers.

Sinykin says these changes “fly in the face of Wisconsin’s conservation ethic” and contradict the wishes of the majority of state residents who prefer “non-lethal” nature activities, like hiking and photography.

These policies, Sinykin alleges, are driven by special interest money and influence: “Here in Wisconsin, when it comes to wolves, the extremist hound-hunting lobby has been getting what it paid for.” 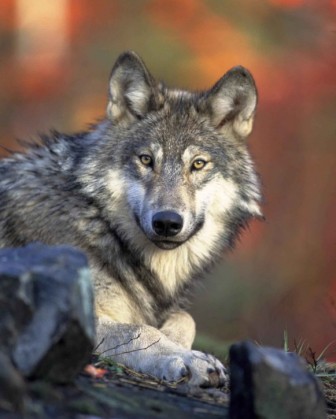 A state advisory committee has recommended a lower wolf kill quota for this year than for 2013. But there could be pressure to change it. Photo: U.S. Fish and Wildlife Service

Three major wolf-hunt proponents — the Bear Hunters, state chapter of Safari Club International and United Sportsmen of Wisconsin — have collectively spent more than $400,000 on lobbying in the past 10 years.

And Bear Hunters and Safari Club members, records show, have given nearly $250,000 to state political campaigns since mid-2008. This includes $21,500 to Gov. Scott Walker, and $35,000 to current members of the legislative committees overseeing natural resources, including members of both parties.

On May 19, the Wolf Advisory Committee recommended a harvest quota of 156 wolves this fall, about 100 less than a year before. Lobner had asked for a harvest of 300 wolves, twice what was approved.

Milwaukee blogger James Rowen, a wolf hunt critic, was quick to the draw: “No doubt the bear hunters will bring pressure on the DNR to boost the kill.” Sinykin agrees, saying the public needs to protect DNR staff from “improper political pressure.”

According to DNR large carnivore specialist Dave MacFarland, the 156-wolf quota would continue to reduce the state’s wolf population, but at a slower rate than last year. The number is subject to further discussion and state Natural Resources Board approval.

Does MacFarland expect interest groups who want a higher kill number to exert pressure on the process? His answer: “I think, based on my experience with wolf management, that there’s going to be pressure on all sides.”