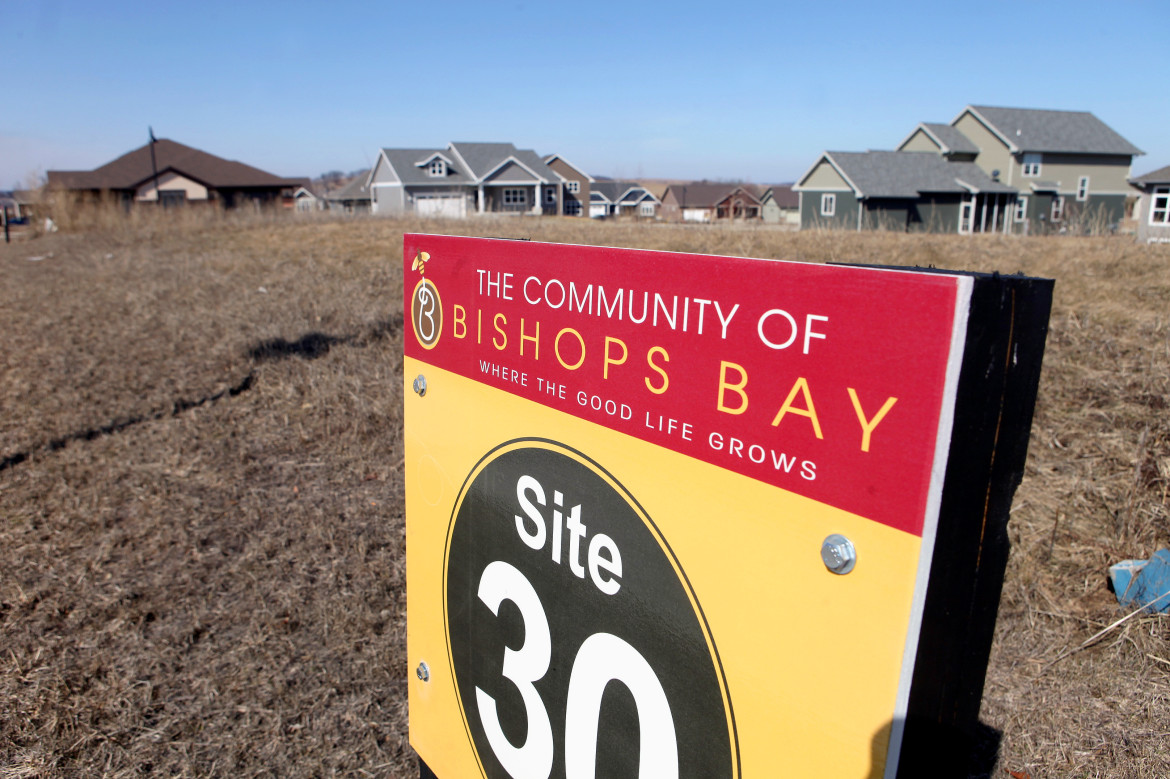 “We are creating a level of expectation on how to steward the land while it is still agricultural,” said Don Heilman, president of the Clean Lakes Alliance, about Terrence Wall’s Community of Bishop’s Bay development north of Madison. “This will be a model for other developers to follow.” Mike DeVries/The Capital Times

The Capital Times and Wisconsin Center for Investigative Journalism collaborated on this four-part series to examine threats to the quality of the Madison area’s spectacular lakes, and ambitious new efforts that seek to improve them. Researchers around the world are watching our lakes in hopes of adapting these lessons to troubled bodies of water in other areas.
Murky Waters project page: Stories, data visualizations, photos.

On a recent spring day, developer Terrence Wall points out the conservation techniques he is putting in place on a picturesque piece of property that borders Gov. Nelson State Park, prairie land and a small creek that drains into Mendota Lake.

The 750-acre Community of Bishop’s Bay development is a hilly plot of land and includes the fifth-highest peak in Dane County, farmland and land that will sit dormant until the property is built out over the next decade.

To reduce the chances of runoff leaving the property before, during and after the land is developed, a GPS survey was done to determine the slopes of the land within the borders of the property.

Armed with the knowledge of how the land drains, Wall, owner of T. Wall Enterprises who has amassed one of the largest office space portfolios in Wisconsin, was able to map out the naturally existing drainage areas. Now he will develop around them, not in them, as is often the case.

“Developers are often demonized, but I have probably planted more trees than 99 percent of citizens and the city of Madison,” said Wall, the 2009 recipient of the Governor’s Award for Excellence in Energy Efficiency and a one-time Republican U.S. Senate candidate who lost to Ron Johnson. “There is nothing worse than a town filled with concrete.” 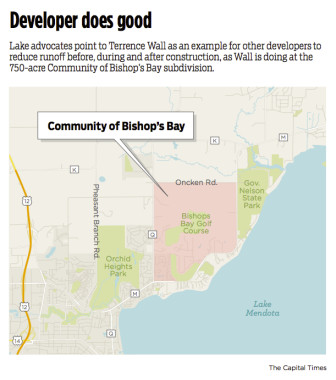 With some environmental stewardship in his developer’s bones, he is also wise to buyers’ appetite for buying green —  Wall is working with the nonprofit Clean Lakes Alliance to tackle runoff before, during and after the property’s 10-year build out phase. Roughly two-thirds of the development is in Middleton, the remainder in Westport.

There will be a Waunakee public school, a private school, a church, a town center, a 15-acre lake, and bike and pedestrian trails.

As the Clean Lakes Alliance has learned, as developments lingers, runoff can result.

The first step in reducing phosphorus runoff from the Bishop’s Bay development was ending a lease with a livestock farmer. Eliminating the livestock eliminates manure, a leading cause of phosphorus pollution in the Madison lakes. 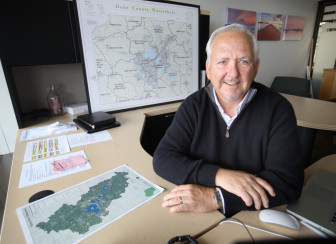 “When we started working with farmers and developers, we realized they rent a lot of their land," said Don Heilman, president of the Clean Lakes Alliance, a nonprofit created to improve the water quality of Madison's lakes. "The farmer crops it, puts manure on it as fertilizer, but there is a lower level of attention given to conservation both by the landowner and the farmer." Mike DeVries/ The Capital Times

Instead, 600 of the property’s 750 acres property are rented to Peacefully Organic Produce and a crop farmer.

The two farmers who now rent Wall’s land agreed to what Heilman refers to as “new boilerplate language” in the leases that outline higher conservation requirements.

“We are creating a level of expectation on how to steward the land while it is still agricultural,” Heilman said. “This will be a model for other developers to follow.”

Beginning this summer, the property’s low-lying areas will be modified to catch runoff from the farms in retention ponds and lakes.

To match the natural elements of the area and the development’s proximity to Gov. Nelson State Park, Wall said one of the neighborhoods will be bordered by prairie grass and another will include gardening plots for every home.

Wall said that “rather than flatten the land like other developers,” he is going to maintain the property’s tall, forested high ground and build a park on it.

“More people will have access to the view of the Capitol,” Wall said.

The Clean Lakes Alliance, the four-year-old nonprofit that bills itself as a quality-of-life rather than an environmental organization, has set a lofty goal to reduce phosphorus levels by 50 percent in the five Madison-area lakes by 2025. 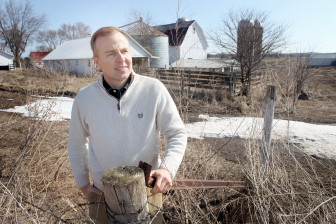 “We recognize this is an important watershed and we realize the lakes are an important resource,” said Terrence Wall, the owner of two development companies and a lifelong Madisonian. “Developers like me have no interest in just cranking out another development. We take pride in our ability to be out front on this effort.” Mike DeVries/The Capital Times

The goal comes at the same time the Madison Metropolitan Sewerage District has begun using a new practice known as adaptive management to reduce phosphorus levels in the entire Yahara Watershed in order to meet new state guidelines.

To test out the adaptive management technique, which creates private and public buy-in around the premise that those responsible for pollution need to work collectively in order to reduce phosphorus levels, a pilot project is being conducted in the Six Mile Creek Subwatershed.

Wall’s land hugs Dorn Creek, which is part of the Six Mile Creek Subwatershed. This explains why his property is a good candidate to target for runoff reduction.

Wall lives on Lake Mendota and grew up swimming in the lakes. He is on board to clean up the lakes not just because of the lingering poor water quality, but because it makes economic sense.

“We recognize this is an important watershed and we realize the lakes are an important resource,” said Wall, 49, a life-long Madisonian. “Developers like me have no interest in just cranking out another development. We take pride in our ability to be out front on this effort.”