Dale Schultz tells a story he heard about a recent meeting of Republicans in the state’s 6th congressional district.

Besides overwhelmingly passing a resolution against two GOP state lawmakers, Sen. Luther Olsen and Rep. Steve Kestell, over their support for Common Core education standards, attendees at this March 22 event affirmed Wisconsin’s right to secede from the union.

As Schultz relates, one attendee objected: “Wait a minute, we’re the party of Abraham Lincoln” — who, as a matter of historical fact, was not a big fan of secession. Someone else then rose to criticize Lincoln.

Schultz, 60, a Republican who is stepping down after 32 years in the Legislature, most as a state senator, is dumbfounded: “Who’d have ever thought you’d be at a Republican function and have to defend Abraham Lincoln?”

If it’s ironic that Lincoln is having a hard time finding acceptance within the party of Lincoln, it’s no less so that Schultz himself has achieved outsider status. In the mid-2000s, he was twice elected by his Republican colleagues as Senate majority leader. Now, had he sought a seventh Senate term, he faced an opponent from within the GOP, state Rep. Howard Marklein. 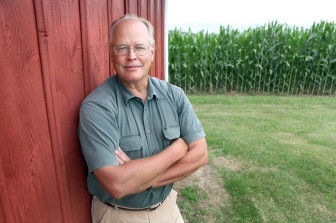 Schultz has broken ranks with his fellow GOP senators — all of them — on a host of issues. These include Act 10 changes to collective bargaining, a mining bill that weakened environmental regulations and, most recently, bills to restrict early voting and make it harder for litigants, including veterans, to sue over asbestos exposure.

Moreover, Schultz has been openly critical of his party and the forces he believes are corrupting the political system. Chief among them: The vast infusions of campaign cash.

“I think that as the process has gotten more driven by money, political parties are paying more attention to where the money comes from,” Schultz says. People able to spend vast amounts are “drowning out every other voice.”

While he believes he could have been re-elected, despite Marklein’s sizeable fundraising advantage, Schultz laments that the days in which a candidate could feel secure with “having $100,000 or $200,000 in the bank” are past. Now an outside interest group can “show up and spend a half a million dollars trashing you and it’s game over.”

In response to such pressures, Schultz says many politicians “have surrendered the right to represent their constituents.” Moneyed interests, including well-funded groups pushing political agendas, have taken over the process.

“Now they show up with a bill drafted, and they expect us to pass it without thinking about it,” Schultz says, citing the mining bill as an example.

Schultz, of Richland Center, says he listened to his district on Act 10 and the mining bill, and even changed his position on Voter ID, which he backed in 2011, after hearing from constituents who “don’t think voter fraud is a huge problem.”

He thinks GOP support for such measures conveys that “we don’t feel our ideas are attractive enough” to win elections, and hence must make it harder for some people to vote. He sees this, too, as contrary to Republican heritage, exemplified by President Eisenhower’s support for voting rights.

In a recent column, Schultz also inveighed against what he feels is excessive partisanship, which demands orthodoxy to party positions and results in the sides viewing each other as “the enemy.”

So what’s Schultz’s solution? He cites campaign finance reform and nonpartisan redistricting, both of which he’s championed, without success. He faults Democrats for not doing more on these issues when they were in charge.

Now he believes it will take pressure from the electorate to make these things happen.

“What’s needed, quite frankly, is a renewed sense of citizenship,” Schultz says. “Maybe things are going to have to get worse before people wake up and seize the day.”

Schultz plans to be part of this process, as a private citizen.

Bill Lueders is the Money and Politics Project director at the Wisconsin Center for Investigative Journalism (www.WisconsinWatch.org). The Center produces the project in partnership with MapLight. The nonprofit Wisconsin Center for Investigative Journalism (www.WisconsinWatch.org) collaborates with Wisconsin Public Radio, Wisconsin Public Television, other news media and the UW-Madison School of Journalism and Mass Communication. All works created, published, posted or disseminated by the Center do not necessarily reflect the views or opinions of UW-Madison or any of its affiliates.