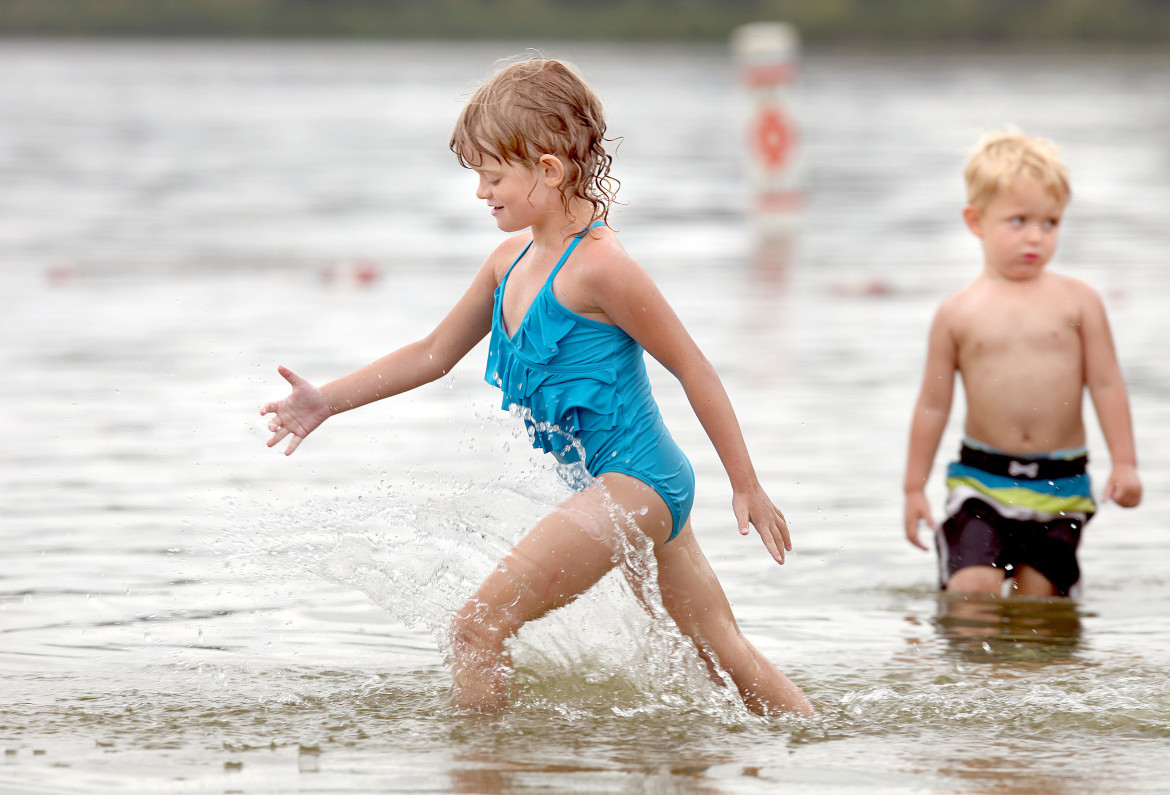 Tarah Delonay, 6, and her brother Ryan Delonay, 3, play at Madison’s Vilas Park beach on Sept. 1, 2013. At Vilas, where geese have contaminated the water, beach closures dropped significantly in 2013.

The Capital Times and Wisconsin Center for Investigative Journalism collaborated on this four-part series to examine threats to the quality of the Madison area’s spectacular lakes, and ambitious new efforts that seek to improve them. Researchers around the world are watching our lakes in hopes of adapting these lessons to troubled bodies of water in other areas.
Murky Waters project page: Stories, data visualizations, photos.

The Yahara watershed is crawling with scientists who keep trying new ways to clean up the lakes.

Fish stocking for lake cleanup: In 1987, scientists stocked Lake Mendota with a massive amount of walleye and northern pike — controversially, the walleye were 60 percent of the statewide stock that year. The predators ate more of the smaller fish like perch. That meant fewer perch were around to prey on Daphnia, the invertebrates that keep the lakes cleaner by grazing on algae. Ever since then, Daphnia populations have been thriving — although they are now threatened by an invasive invertebrate predator, the spiny waterflea.

Computer models: Trina McMahon, professor of civil engineering at UW-Madison, said she is excited about models that attempt to correlate shoreline conditions with those in the middle of the lake, where researchers tend to take water samples. “If we could find a way to predict what’s happening at the shoreline based on what we measure at a few points at the lake, can we more accurately make beach closure recommendations, or at least understand what’s controlling the concentration of cyanobacteria (blue-green algae) at a particular beach? It’s within reach,” she said.

Alum treatment: Sewage treatment plants have been removing phosphorus from wastewater this way for years: They add alum, a chemical that causes the phosphorus to settle out of the water, where it can be dredged later. Could it be used in the wild? In a pilot project, the city of Madison is adding alum to a stormwater retention pond owned by the UW-Madison Arboretum. The chemical is considered safe, but the its presence could also enhance the conversion of mercury to methyl mercury — the kind that is toxic to people.

Carp removal: Bottom-feeding carp kick up nutrient-rich sediments, encouraging murky water. Wingra had major carp and algae problems, so Richard Lathrop, a retired DNR scientist with an honorary UW-Madison position, came up with the idea to get rid of the carp. A commercial fisherman removed thousands of pounds of fish from the lake in March 2008. They were sold to Midwest and New York markets, some for gefilte fish. Lathrop said some were so old and tough that the New York buyers said they never wanted to see a Lake Wingra carp again. The lake cleared up dramatically — but Lathrop said the carp came back last year when Wingra’s dam was submerged during heavy rains.

Beach curtain: The ultimate solution to algae is to prevent pollution, but “can we find a way to clean a beach up — make it nicer and more esthetic — while we’re working on these bigger problems?” said Lathrop. While at DNR, he worked with the city and county to surround the swimming area at four beaches with a special floating boom from 2010 to 2012. The boom had a curtain that dropped all the way to the lake bed, protecting the swimming area. The three-year test showed mixed results: At Bernie’s, it kept the algae out — but at Olin, thick, “unappealing” mats of filamentous algae grew inside the swimming area.

Trash vacuum: Lathrop has floated the idea of putting out boom in the water to collect floating trash and debris near the shoreline, then sucking up the trash with a giant pump. So far, he said, the city isn’t biting.