One day before the U.S. Supreme Court opened new spigots of campaign cash, well-funded groups seeking to sway elections in two northern Wisconsin counties, Polk and Iron, inadvertently drove home another point: Throwing money into the process can hurt as well as help.

Of the 13 active candidates backed in the April 1 Polk County Board election by a group called Operation Prosperity Inc., just four prevailed. And one of these ran unopposed.

Operation Prosperity supported its slate with a website, Facebook page, yard signs, automated phone calls and mailings. In a pre-election filing, it reported independent expenditures of more than $15,000.

That’s actually big money for an election in Polk County, population 44,000. County Clerk Carole Wondra says none of the 28 candidates vying for 15 redrawn board seats filed campaign reports, required when their spending tops $1,000. So Operation Prosperity invested more in the candidates it backed than the candidates themselves.

“Citizens were taken aback by this big-spending group,” says Jeff Peterson, an activist in Polk County. “They didn’t like the idea of people trying to buy county board elections.”

Peterson, a retired schoolteacher and former Polk County board member, ran an ad in local papers questioning Operation Prosperity’s role, funding sources and agenda. “Whose ‘prosperity’ are they really interested in?” it asked.

Operation Prosperity describes itself as “a new grassroots movement” focused on creating a business-friendly environment in Polk County. Sharon Kelly, the group’s president, is proud that it ran only positive messages but is disappointed in the results, which she blames in part on the blowback generated by Peterson and others.

“I think that negative focus on Operation Prosperity did have an effect,” Kelly says.

Gary King, longtime editor of the Inter-County Leader, which serves Polk County, agrees that Operation Prosperity’s foray into the election drew backlash: “I know people were upset about it.” 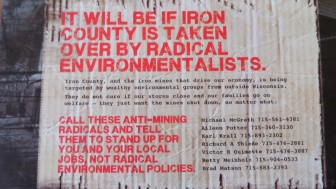 A photo of the Americans for Prosperity flyer sent to residents in Iron County, as published on the blog Woodsperson.

Meanwhile, people in Iron County were definitely upset by the campaign launched by the state chapter of Americans for Prosperity, founded and funded by billionaire industrialists David and Charles Koch. This included a slick mailing that branded seven county board challengers “anti-mining radicals.”

Among those thus labeled, recklessly, was Karl Krall, a local assistant fire chief who happens to be a prominent supporter of a proposed local iron ore mine. He even got one of the pens Gov. Scott Walker used to sign a pro-mining bill. Krall and two other challengers attacked by Americans for Prosperity were victorious. The AFP-favored candidates who won were mostly incumbents.

“For three incumbents to lose a county board race here is kind of a big thing,” Anthony Stella, an Iron County attorney critical of the mine told the Wisconsin State Journal. Americans for Prosperity, he surmises, “did not have the effect they wanted.”

The group’s outlays were not reported, because it did not directly advocate any candidate’s election or defeat. But Iron County Clerk Mike Saari says it was “absolutely” a lot of money in a county where, like Polk, not a single board candidate hit the $1,000 reporting threshold.

On April 2, the U.S. Supreme Court struck down aggregate contribution limits on donations to multiple campaigns, a decision that will likely end similar limits in Wisconsin.

That will make it even easier for certain individuals to spend vast amounts trying to sway electoral outcomes. Lamented Wisconsin union official Stephanie Bloomingdale, “This decision will allow David Koch, for example, to contribute directly to every candidate that his empty heart and full bank account desires.”

But the experience of Polk and Iron counties suggests these big spenders should think twice before wading into an election in ways that the people who vote consider unfair.