Here’s a safe prediction: Among the many things the state Legislature won’t get around to doing in the session that ends in early April is making it harder for people who aren’t supposed to have firearms obtain them.

SB 124 and companion AB 138, to extend background checks to private firearm sales and gun shows, were introduced in April and have languished in committee. No hearings. No debate. Almost no comment from the lawmakers holding them up.

The Legislature, fumes state Rep. Terese Berceau of Madison, one of the bill’s 35 cosponsors (all Democrats), has “done nothing whatsoever to ensure that felons, domestic abusers, and others who are legally prohibited from owning, or even possessing, firearms can’t easily buy them.”

Jeri Bonavia, executive director of Wisconsin Anti-Violence Effort, which supports the bills, likens the status quo to an airport security system with two lines: One with full screening for passengers, the other where anyone can board without scrutiny. “You get to decide” which line to use.

“Would we have any faith in that security system?” she asks, rhetorically.

It’s often said that 40 percent of gun sales occur without background checks; other estimates put the figure at about half that. The stalled bills would require federally licensed dealers to run background checks on private and gun show sales. Guns bequeathed or given as gifts would be exempt.

In October 2012, Radcliffe Haughton killed four people, including himself, and wounded four others in a shooting spree at a spa in Brookfield, Wis. A restraining order obtained by his estranged wife, one of the victims, barred him from firearm possession. He bought the semi-automatic handgun he used from an online seller without a background check. 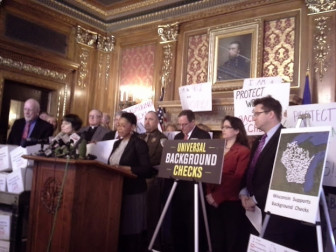 Lawmakers and others present 16,500 petition signatures at a press conference at the state Capitol Feb. 27. Bill Lueders/Wiscomsin Center for Investigative Journalism

Another measure of the possible utility of background checks comes from the annual report produced by the Wisconsin Department of Justice on the state’s concealed carry law. These concern people who presumably already have weapons seeking state permission to carry them in public.

The report for 2013, released in February, reveals that more than 600 license applications were denied because the applicant was not legally permitted to possess a gun, for reasons including felony convictions, misdemeanors related to domestic abuse, and being a “fugitive from justice.”

DOJ spokeswoman Dana Brueck says local prosecutors are notified in cases where “it’s found that an applicant was untruthful” regarding disqualifiers. The agency does not track whether these lead to arrests.

Recently, Democratic lawmakers and others held a press conference at the Capitol to present more than 16,500 signatures from Wisconsin residents in support of background checks. These were delivered to legislative leaders.

The advocates said state Rep. Joel Kleefisch, R-Oconomowoc, chair of the Assembly committee to which the bill is assigned, has ignored their appeals to hold hearings on the bill. Kleefisch and Assembly Speaker Robin Vos, R-Rochester, did not respond to requests for comment.

Senate Majority Leader Scott Fitzgerald, R-Juneau, buttonholed at a recent public event, had this to say about why the bills have not advanced: “Otherwise law-abiding citizens shouldn’t have a hurdle put down in front of them when it comes to purchasing a gun legally.” He added that he wasn’t taking a position on whether the bills are good or bad.

Wisconsin Gun Owners Inc., which reported spending more than 100 hours lobbying against the background check bills last year, has no such qualms. A statement posted on the group’s website by executive director Corey Graff calls the proposed checks a “Soviet-style clampdown on the right to buy, sell and trade without government permission,” meant to “further pave the way for the out-of-control national gun-registration scheme.”

According to this statement, the bills are “marching through the Wisconsin Legislature.”

Bill Lueders is the Money and Politics Project director at the Wisconsin Center for Investigative Journalism (www.WisconsinWatch.org). The Center produces the project in partnership with MapLight. The Center collaborates with Wisconsin Public Radio, Wisconsin Public Television, other news media and the UW-Madison School of Journalism and Mass Communication. All works created, published, posted or disseminated by the Center do not necessarily reflect the views or opinions of UW-Madison or any of its affiliates.