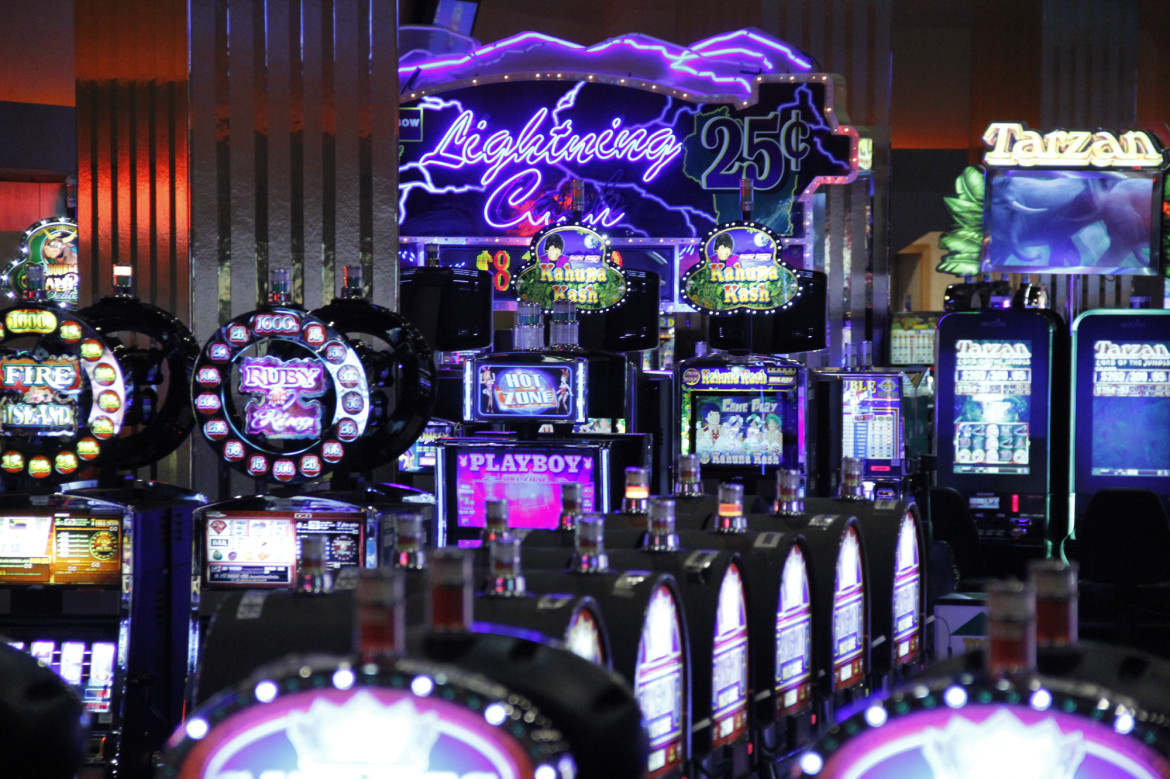 The Ho-Chunk’s casino at Black River Falls offers more than 600 slot machines. According to a federal audit, the casino made a profit of $30 million in fiscal 2012. Photo taken Jan. 16, 2014. Kate Golden/Wisconsin Center for Investigative Journalism

This report is part of “Doubling Down: The Great Divide in Indian Gaming,” a series produced by Gannett Wisconsin Media in collaboration with the Wisconsin Center for Investigative Journalism.

Chloris Lowe remembers how it used to be. His people, the Ho-Chunk, were impoverished, like most of the nation’s Native American tribes. Unemployment was rampant. There were no tribal businesses, and debt stirred talk of bankruptcy.

“The tribe subsisted wholly on federal and state programs,” said Lowe, who served as the Ho-Chunk’s top political leader in the early 1980s and again in the mid-1990s.

“We were, for all practical purposes, a welfare state.”

All that is different today, due in large part to the tribe’s ability to run gambling operations. The tribe, which prefers the word “gaming,” now operates a network of six casinos, with 175,000 square feet of casino floor space, 5,000 slot machines and about 100 tables, for games including blackjack, poker and roulette.

The Ho-Chunk’s gambling operations generate about $200 million in profit annually, a figure confirmed by tribal officials. That accounts for more than a third of the annual totals reported for all 11 state tribes in a 2012 state audit.

The Ho-Chunk are tied with the Oneida in the number of casinos, and their profits are comparable to those of the Potawatomi.

Gambling has provided tribal members with jobs, opportunity and income. It has allowed the tribe to build infrastructure and create programs for its roughly 7,400 members, and to preserve the Ho-Chunk way of life. 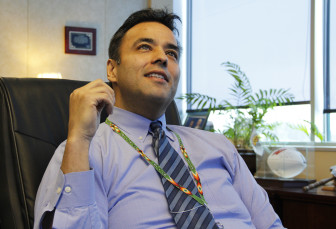 “In the course of less than 35 years, we’ve changed a complete society, and for the better,” says Lowe, now a business consultant to tribal nations. “It’s a monumental change.”

Indian gambling has allowed the Ho-Chunk to capitalize on what is otherwise the tribe’s greatest drawback. Its land holdings are mostly small, scattered in more than a dozen Wisconsin counties. But they include parcels near larger population and visitor centers, like Madison and the Wisconsin Dells.

Jon Greendeer, the tribe’s elected president, agreed that having scattered lands in key places is an advantage “if your goal is to make money.” But, he added, “if your goal is to preserve your people, your culture, your language, it’s the worst thing on Earth.” He would rather have a tribal homeland with geographic continuity.

“Our families have been ripped apart, our communities have been disenfranchised, our stories have been lost, our villages are no longer,” Greendeer said. “We’ve lost a lot.”

On a recent Saturday afternoon, the tribe’s casino on the east edge of Madison is booming. There are hundreds of cars in the lot and most of the facility’s 1,100 slot machines are in use.

Row after row of players are participating in a grand income redistribution scheme, parting with their money in hopes of making more. It is a pursuit that has only one sure winner.

The Ho-Chunk’s casino empire grew out of the tribe’s first business, a tobacco store that opened in a used trailer in the Wisconsin Dells in 1982, with the help of a U.S. Small Business Administration loan. Lowe, then tribal chairman, said the store “produced the seed money for everything else that followed.” The next year, on the same site, the tribe opened a bingo hall.

By this time, Lowe had already been ousted as chairman, a not-uncommon fate for Ho-Chunk tribal leaders. But he continued to play a role in the tribe’s evolving gambling business, including its second bingo hall in Black River Falls. 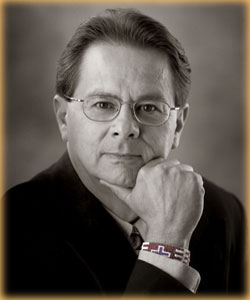 Chloris Lowe, a two-time Ho-Chunk tribal leader, acknowledges that gaming has brought internal discord but feels the gains to the tribe have been worth it. Photo courtesy of Chloris Lowe

Over time, in a saga that included an FBI probe, a shooting, an arson at the Dells facility, and the conviction of an outside management consultant on bribery charges, the Ho-Chunk assumed the task of managing their own gambling operations.

“I was always of the opinion that this was something we could handle,” Lowe said. But like other tribes, the Ho-Chunk were persuaded that they needed to bring in outside managers. “They were sold a bill of goods.”

A series of court decisions and Wisconsin’s creation of a state lottery in 1987 paved the way for full-fledged casinos, which the Ho-Chunk now operate in the Dells, Madison, Black River Falls, Nekoosa, Tomah and Wittenberg.

The tribe’s Madison casino offers Class II instead of Class III gambling, meaning patrons are technically competing against other players and not the house. The distinction seems not to matter to those parked at its machines. It also offers computerized poker, which the state Department of Justice is seeking a federal injunction to stop. That case is pending.

Lowe acknowledges that the Ho-Chunk have endured internal discord related to their gambling operations. “It has caused splits within families, splits within communities,” he said. “Change is disruptive.” But he thinks the gains from gambling have been worth it.

“We’ve gotten through a lot of conflict,” Lowe said. “There will be more of that in the future, but not as intense.” Where the money goes

The economic impact of the Ho-Chunk’s gambling operations is far-ranging. The tribe is the largest employer in two Wisconsin counties, Sauk and Jackson, where the Dells and Black River Falls casinos are located.

“The tribe is very important to the area,” says Sarah Hudzinski, spokeswoman for the Wisconsin Dells Visitor & Convention Bureau. Its casino and convention space draw in visitors, and the tribe works cooperatively with non-native businesses, like small hotels.

Hudzinski also praises the Ho-Chunk for being good neighbors, with a “philosophy of giving back to the community.” In August, the tribe donated $25,000 to help build an amphitheater at nearby Mirror Lake State Park. A dedication ceremony is planned on June 12.

While the economic impact of gambling on the scattered Ho-Chunk tribe has not been quantified, tribal leaders attest that unemployment has declined, college enrollment has risen and more members own their own homes.

The tribe’s headquarters in Black River Falls now include a health center and courthouse that will eventually host a tribal police department. Revenues from gambling have also helped the tribe build relationships with other governments: federal, state and local. 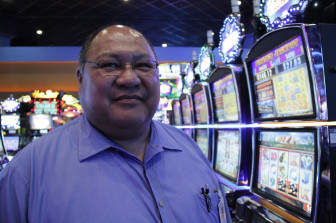 Greendeer agrees, saying gambling has empowered the Ho-Chunk and spurred “not an exodus but definitely a migration of many from dependence to independence.”

The Ho-Chunk employ about 3,500 people, 28 percent of whom are tribal members. Nearly 2,300 of these work in the casinos or affiliated businesses, like hotels.

Each of the tribe’s 7,400 enrolled members receive around $12,000 a year in per capita payments from gambling revenues, in quarterly installments. That comes to nearly $90 million a year.

Payments to young people are held in trust until they turn 18 — or 25, for those who don’t graduate from high school or get a GED diploma. That’s a sudden influx of more than $200,000. “Some of them have made it last a year,” Greendeer jokes.

Anne Thundercloud, a former Ho-Chunk spokeswoman who now works as a public relations consultant, said the per capita payments are “helpful” but not ideal.

“I would like to see it put towards our programs,” Thundercloud said, “especially those dealing with employment and training.”

Greendeer said the per capita payments are intended to supplement household income. But he knows that, for some, “it’s dependent income.” So the tribe’s focus is on helping members be educated and find careers.

Besides the per capita payments, the tribe has an annual budget of roughly $50 million. This funds a range of programs, including housing assistance, college scholarships, health and dental coverage, and elder care. There’s even a program that covers gym memberships and pays tribal members, who face a 25 percent rate of diabetes, for the time they spend exercising.

And the Ho-Chunk give about $1 million a year to charity. “I have a couple megabytes on a spreadsheet of all of the charities we’ve given to,” Greendeer said. Among them are programs for compulsive gamblers, whom Greendeer considers “a liability” to the industry’s image.

The tribe’s rising fortunes have helped preserve its cultural heritage. “Our language is the most important thing,” says tribal spokesman Collin Price. A tribally funded program works with public school districts in Tomah, Black River Falls and Wisconsin Dells to teach Ho-Chunk — not just to native students but all who desire. 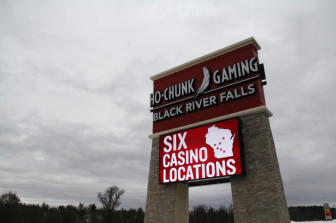 Greendeer acknowledges that an economy built on gambling may not be sustainable in the long run. He envisions a future where individual members, not tribal government, are driving opportunity.

He framed it as a question: “Do you want our government to build a bowling alley and a grocery store, or do you want to create the environment to support native entrepreneurs?”

But the profit margins of gambling make other ventures less attractive. “I can take one slot machine and I can destroy any business that you try to create,” Greendeer said. “I can make more money off of that.”

Figures from federal audits of the Ho-Chunk Nation show the tribe made a total of $957 million in “net cash” — profit — from its gambling operations in the five fiscal years between 2008 and 2012. This includes $207 million in fiscal 2012, which ended on June 30 of that year, the audit shows.

The five-year gambling total dwarfed the $64 million earned from the tribe’s other economic enterprises, including its five casino-based convenience stores. In fact, the profits from these other sources did not even match the $81 million the tribe received during this period in federal and state aid, which fund a wide range of health and human services programs.

The tribe is pursuing new economic activities outside of gambling. But Greendeer said the tribe is “very cautious and almost overprotective” about such opportunities, in part because of past exploitation. Tribal decisions are not made, to borrow a phrase, at the speed of business. And tribal politics are fraught with peril.

For instance, Greendeer has not told tribal members he met with President Barack Obama for about 45 minutes last fall to discuss his opposition to the Menominee tribe’s plan to open an off-reservation casino in Kenosha. He worries that if that plan nonetheless comes to pass, his trip to the White House will be decried as a waste of time and money. “How much did you spend?” he imagines being asked.

Both the Ho-Chunk and Potawatomi have strongly objected to the Kenosha casino, which has received federal approval. Greendeer concedes his tribe is worried about the projected $20 million revenue loss from this competition but also argues that the southern part of the state is the Ho-Chunk’s ancestral homeland.

The Ho-Chunk also plan to expand their casino empire, in Beloit. The tribe in 2012 reached an interagency agreement with the city of Beloit and Rock County and is awaiting federal and state approvals.

Decorah said the Beloit facility is expected to have about 1,800 slot machines, which would make it second to the Dells in terms of size. Greendeer expressed confidence it will be built. “It’s going to be great,” he said.